YourPost Leeuwarden: a legacy of LF2018

by Thomas Ansell
in People
0

YourPost.eu, a crowd sourced, multi-lingual news site, was launched as part of Leeuwarden-Friesland Capital of Culture. Its citizen journalists are now looking for ways to ensure that the site plays a role in the legacy of LF2018.

Every Wednesday morning, De Kanselarij in Leeuwarden bubbles with conversations in half a dozen languages, from Dutch to Spanish and Italian to Portuguese. A group of journalists, young and old, has been brought together by YourPost.eu, a crowd-sourced news network features stories about Leeuwarden and Friesland in no less than eight languages.

During the weekly budget meetings, story ideas come in thick and fast as participants pitch video content, interviews and  “vox pops” (man on the street interviews). The stories are written in several languages, and anyone with experience or interest in storytelling and journalism is welcome to join. Story ideas are put to the room, and everyone is welcome to give constructive advice or recommend different ways of gathering information before one of the senior editors decides whether or not to commission the piece.

More than 40 contributors are listed on the YourPost site, and editorial consistency is maintained by a professional team of journalists, including editors-in-chief Aukje Mulder and Piet Prins. Radboud Droog, a member of the communications team for LF2018, is also involved with the project, as is Wyb de Boer from NHL Stenden’s Knowledge2018 programme.

This new approach to journalism is rooted in a Frisian aphorism; iepen mienskip, which roughly translates to ‘open society’, and is one of the impetuses behind Leeuwarden’s embrace of being the European Cultural Capital. YourPost.eu was created with the “5 E’s” of the Leeuwarden-Friesland Capital of Culture year: Ecology, Empowerment, Entrepreneurship, Europe, and Experience. In practical terms, that means that YourPost tells stories from across Friesland, whether they are about high-culture exhibitions in the biggest cities to miniutaie from the tiniest villages. 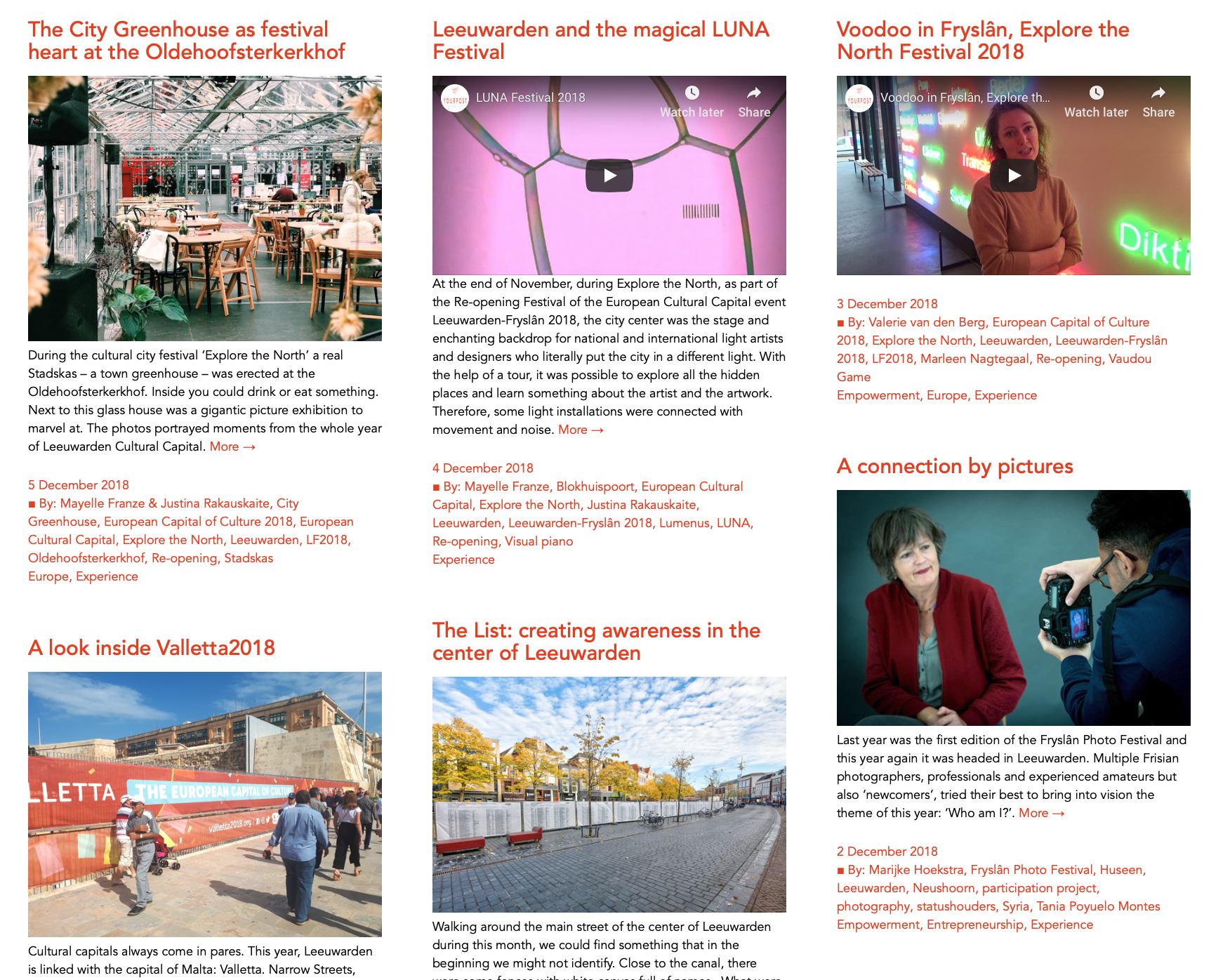 Recent stories in the English-language section include the differences in biking culture between Leeuwarden and Taipei, a photo essay about the other European Cultural Capital of 2018, Valletta (Malta), and an explanation of ‘The List Project’, which records the names of all refugees who have lost their lives in Europe since 1993. Sections in other languages include a mixture of translated articles, and original journalism.

The earnest young cohort of journalists involved with YourPost have all come to the project for different reasons and have gotten a lot out of it. Not all contributors are budding media professionals: Connie Feng Chien Kao, from Taiwan, is studying accounting. “This gives me scope to try media and journalism, but importantly I can also ‘meet the city’, and get to know how it lives’. Some writers see it as a valuable introduction to the media world. “It’s great for making connections”, said Laura Apostol, who is Romanian. Dutch contributor Marijke Schuilenburg says that YourPost “is an opportunity to develop our journalistic skills and meet people we’d otherwise not”.

Wildlands gets breathing room: all financiers agree to defer payment

Wildlands gets breathing room: all financiers agree to defer payment