Leeuwarden is a European Capital of Culture in 2018

Throughout 2018, Leeuwarden (and the wider province of Friesland) will play host to hundreds of artists and performers thanks to its title as European Capital of Culture. In addition to figuring out what to see and where, you may also be wondering: what is a Capital of Culture? Here are answers to the five W’s about what this title means to the city and the region.

What is the Capital of Culture?
The Capital of Culture is a title given to various European cities since 1985. Melina Mecouri, a former Greek minister of culture, came up with the idea in 1983 as a way to pay special attention to the cultural character of European cities. Two years later, the European City of Culture programme was launched, and Athens was the first city to earn the title. Cities or regions that have been chosen are often less well-known, and the selection panel – consisting of members representing different institutions within the European Union – make their decision in part based upon how the title can give a boost to the chosen city, both among outsiders and its own inhabitants.

Why is Leeuwarden the Capital of Culture?
In December 2012, Leeuwarden’s candidacy as one of the Dutch cities eligible to become the Capital of Culture 2018. By September 6, 2013, the European Capital of Culture selection panel declared Leeuwarden the winner, beating out Eindhoven, Maastricht, The Hague and Utrecht for the title. In explaining why they chose the Frisian capital, the panel expressed their appreciation for how the region sought to address issues through culture, namely “re-definition of the relationship between city and the countryside, the need to further promote and foster cultural and environmental sustainability, and the opening-up of historically very cohesive and inward looking communities.” The theme of LF2018 is “Iepen Mienskip” (“Open Society”). 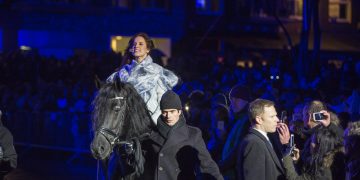 Who is paying for the Capital of Culture?
Current cost estimates for putting on the ambitious events calendar is 61 million euros: one-third of the financing comes from sponsors, one-third comes from the province of Friesland, and the rest of the money is coming from the city of Leeuwarden, other Frisian municipalities (some more willingly than others), the central Dutch government, the European Union and other miscellaneous funds. Public spaces and other infrastructure in the province, particularly in Leeuwarden, have also been upgraded in the lead up to the Capital of Culture year.

When is the Capital of Culture year happening?
Right now. On January 28th, Capital of Culture Leeuwarden-Friesland officially kicked off with a city-wide spectacle in Leeuwarden. King Willem-Alexander and Queen Maxima attended the opening ceremony, which took place across three different public squares in the Frisian capital with musical performances and interactive art projections on towers built to resemble the crooked Oldehoeve church tower. Church bells in towers across the province also chimed to ring in the momentous occasion. Through 2018, 390 different cultural events, presentations, exhibitions, festivals, conferences and workshops will be taking place across the province of Friesland (34 events will be taking place either in part or entirely in English).

Where are the Capital of Culture events happening?
Pretty much everywhere. Nearly every town, city, field and beach across Friesland will be putting on at least one cultural event at some point in 2018.

While the vast majority of activities will take place in Leeuwarden, The Northern Times picked out a couple of activities happening in the more far-flung parts of the province: