What is the Elfstedentocht?

For the past two years, beloved Frisian weatherman Piet Paulusma has predicted that this winter would be a properly cold and snowy one. That may not sound like good news to everyone, but any hint of chilly temperatures ignites a spark of hope in millions of Dutch hearts that the famed Elfstedentocht – Eleven City Tour – may finally be held once more.

Although the national media in Hilversum dedicates hours of coverage to speculation and monitoring the conditions of any developing natural ice, the people of Friesland, the northern province where event is held, dare not say the three magical words – it giet oan – until they are standing on the frozen canals in the pitch-black early hours of the actual morning of the epic event. Their hesitance is understandable: although extremely cold temperatures in 2012 looked promising, there has not been an edition of the gruelling marathon on natural ice since 1997.

Although there are written references to skaters braving the route as far back as 1760, the inaugural official race was held in 1909 when 22 competitors took to the ice – the first winner, Minne Hoekstra, completed the route in just under 14 hours. Nearly 100 years later, In 1997, the first man across the line was a farmer and speed skater named Henk Angenent, who finished in less than 7 hours. By the time of that 15th edition of the Elfstedentocht, 11,526 people completed the route, including 300 speed skaters.

The event was all that anyone was talking about when it was ultimately announced. An estimated 2 million spectators travelled to the rural province of Friesland – thousands of Frisian residents offered to let the skaters sleep in their spare bedrooms before and after the race. The Dutch national broadcaster NOS dedicated 400 employees, 16 reporters, 11 directors, three helicopters and 70 cameras to the one day event.

Yet the Netherlands had already been synonymous with gliding along on frozen canals for hundreds of years before the modern media circus. Idyllic images of Dutch men, women, children – and even their pets – on the ice defined the oeuvre of Hendrick Avercamp, a Dutch Golden Age painter. The detailed interactions on his canvases are reminiscent of Hieronymous Bosch, but where the mood of Bosch’s work was darkly Biblical, Avercamp’s 17th century imagery was filled with happy ice skaters wearing cheerfully coloured clothing – ruffled collars and bodices, no lycra in sight. 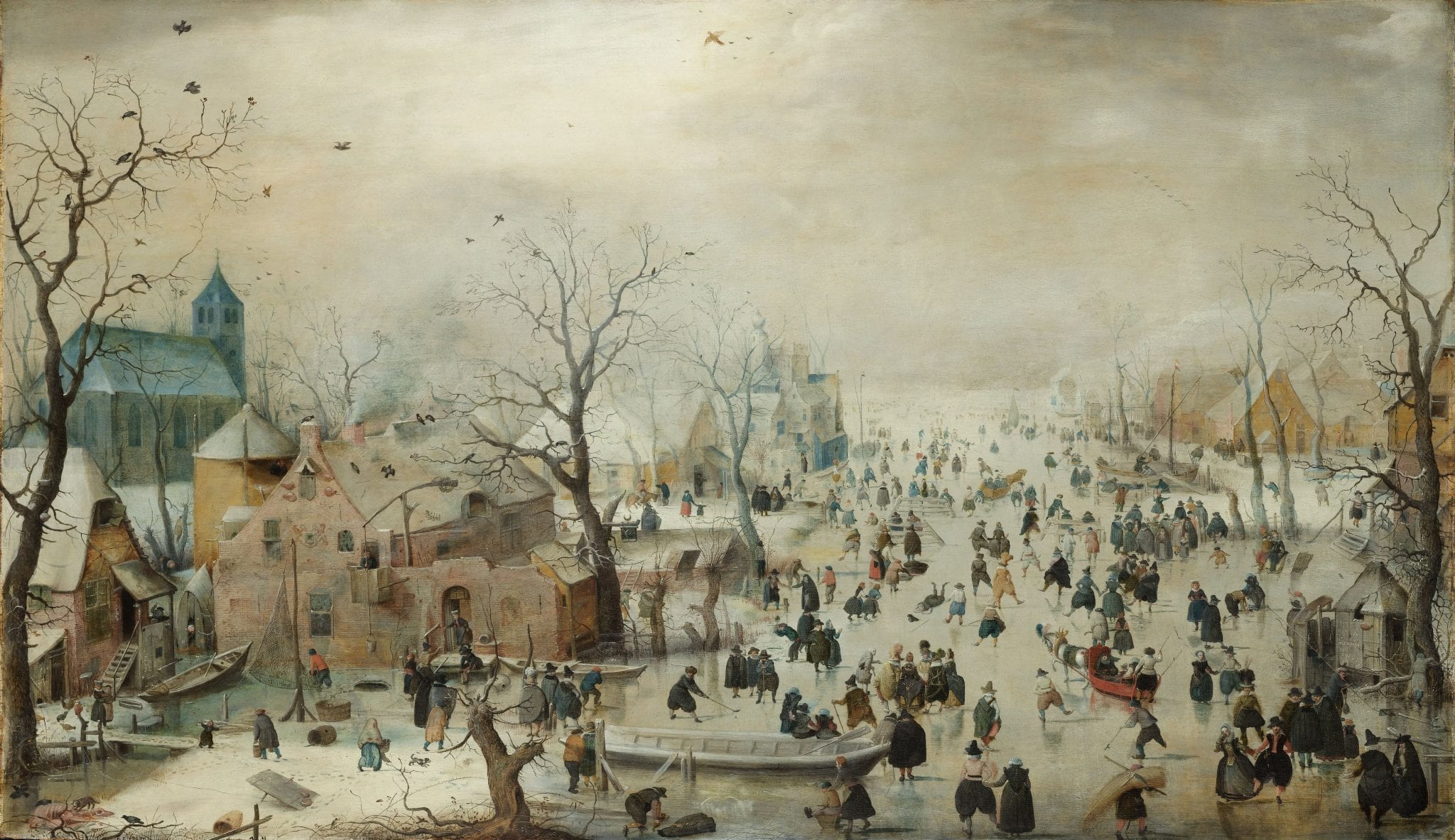 While natural ice on the canals is increasingly rare in the 21st century as winters are typically milder due in no small part to climate change, between the 17th and the 19th century, extremely cold winters were the norm. During that period, the northern hemisphere was in what is called the Little Ice Age: 1650, 1770 and 1850 in particular were classified as maxima cold periods, and many of Avercamp’s wintry scenes were created between 1608 and 1620. The western romanticized notion of white Christmases can be attributed to this climate period, too: Charles Dickens’ best known stories are characterized by snowy English scenes because they were written toward the tail end of the Little Ice Age.

Ice skating and the Netherlands became truly inseparable in the world’s imagination thanks to a contemporary of Dickens. Mary Mapes Dodge, born in New York City, had never set foot in the Netherlands before writing her 19th century children’s novel: “Hans Brinker; or, the Silver Skates: A Story of Life in Holland”, which is perhaps best known for popularizing the folkloric story of a boy saving the low-lying nation from flooding by sticking his finger into a dike.

The story follows Hans and Gretel Brinker, a brother and sister whose family that had fallen on hard times, and how their hard work was rewarded during an epic ice skating competition based on the Elfstedentocht: 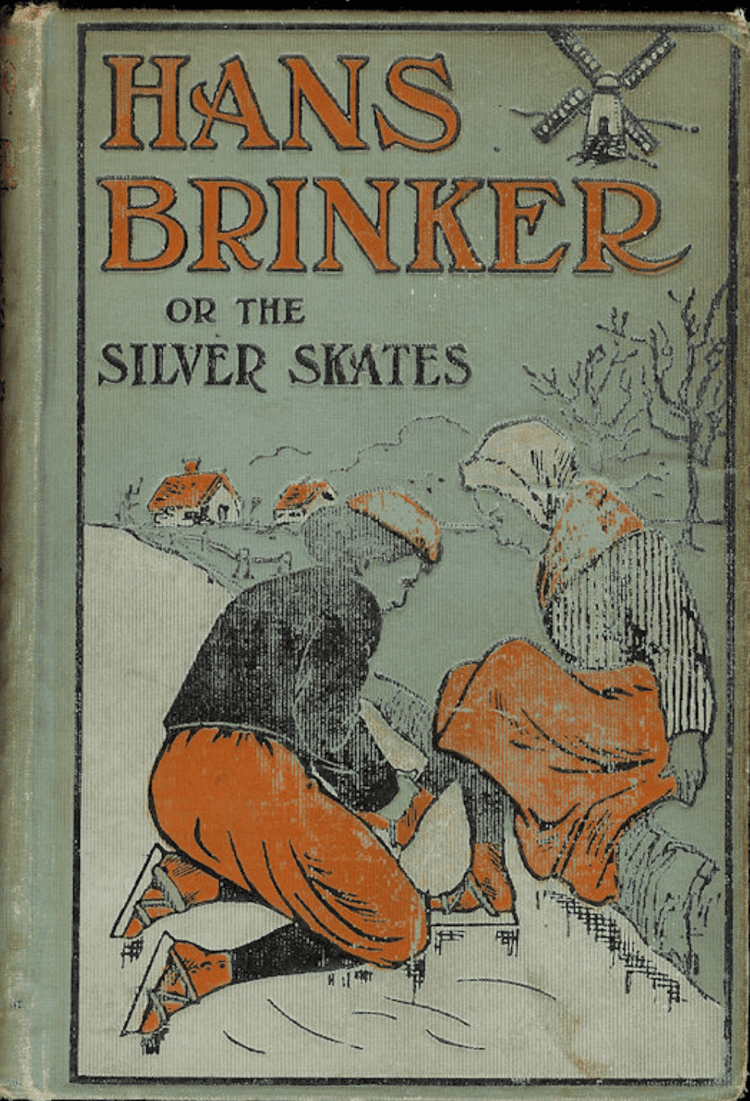 Dodge did not set her story in Friesland, but like the rest of the Netherlands, Frisian cities are connected by waterways, many of which were built during the Dutch Golden Age for merchants to do business in different areas. Although buying a horse or a boat was an expensive investment for most people, when the canals froze, skates were cheap, and using the network of canals, ditches and lakes throughout Friesland was an efficient way to conduct business.   There are written accounts of wagers placed among skaters to see who could reach all of the Frisian cities in one day dating back to at least 1749, and in 1890, sports enthusiast and journalist Pim Mulier skated the route himself. Nearly 20 years later, Mulier helped to organize the first officially recognized Elfstedentocht: he also designed the metal cross given to participants who complete the entire route in a single day.

For the skaters who feel compelled to take to the ice more than once every 20 years, alternative Elfstedentocht marathons are regularly held in other countries around the world. Norway, Finland, America, Canada, Japan, Mongolia and Austria have all hosted Dutch skaters on their own waterways. Dozens of alternative Elfstedentocht competitions are also held throughout the year in Friesland: cycling, rowing, walking and classic cars are options, among others. A former Dutch Olympic swimmer, Maarten van der Weijden, swam nearly 200 kilometers along Elfsteden route in 2018 to raise money for cancer patients.

Since prolonged sub-zero temperatures are a prerequisite for the ice to become at least 15 centimeters thick, which is the minimum to ensure safe skating for roughly 16,000 participants, the race often takes place in extremely cold conditions. The winter of the 1963 edition of the race was one of the coldest in the 20th century, and the weather was so bad – skaters faced a strong eastern wind, heavy snow and rough ice – that only one percent of all participants who began the race managed to finish it, many falling short due to injuries ranging from frostbite to snow blindness. That infamous edition was depicted in a film, “The Hell of ‘63”, in 2009.

How international is the north? Here are the numbers

The North on Ice

The North on Ice