University council votes down 600,000 euros in public financing for Yantai - The Northern Times

University council votes down 600,000 euros in public financing for Yantai

The University Council has unanimously voted against using public money to cover 600,000 euros in the university budget for new activities in the Chinese city of Yantai.

Dagbald van het Noorden reports that the entire University Council voted against a section of the institutional budget seeking to authorise using public money to cover 600,000 euros in expenses for continued development of activities in the Chinese city of Yantai.

In early 2018, the council voted against plans to set up a full-fledged branch campus in Yantai. Since then, the university has been looking into ways to set up smaller scale collaborations with their partners in China. A preparation team was formed to continue developing those activities, and that team is incurring expenses. The 600,000 euros in question are meant to cover those expenses.

The entire council, which consists of students and staff, voted against using public money to cover those costs. The council has maintained that the university should not be spending any public funds on the Yantai plans, which is in line with the stance of the Dutch Ministry of Education: any campuses set up by Dutch universities abroad cannot use taxpayer money to pay for their activities.

In a Facebook post about the vote, the personnel faction of the council wrote, “After a year of asking to view the financing and planning, 600,000 euros were added to the budget at the end of the year. The staff faction – and the entire council – feel that this money should not come from public funds.”

An article in the Financieel Dagblad this summer, based on information which was made public by Democratisch Academie Groningen (DAG), reported that the university had been “creative” with its bookkeeping in its efforts to finance branch campus preparations. The university allegedly recategorised funds from the university’s 2015 annual report as “private” rather than “public.” A statement from the university strongly denounced “any appearance of irregularities” described in the report. Research is also being carried out by former Stenden president Leendert Klaassen into how many hours university staff spent working on preparations for the Chinese branch campus.

In recent weeks, a new website has been keeping track of the known costs associated with the Yantai plans thus far: www.yantai.nl. The site translates the expenses, which were listed around 3.5 million euros as of Thursday, 13 December, into resources that could have been bought for the same money: 178 study spots, 214,793 bike rack places or, in University Cat-friendly terms, 715,404 kilos of cat food. 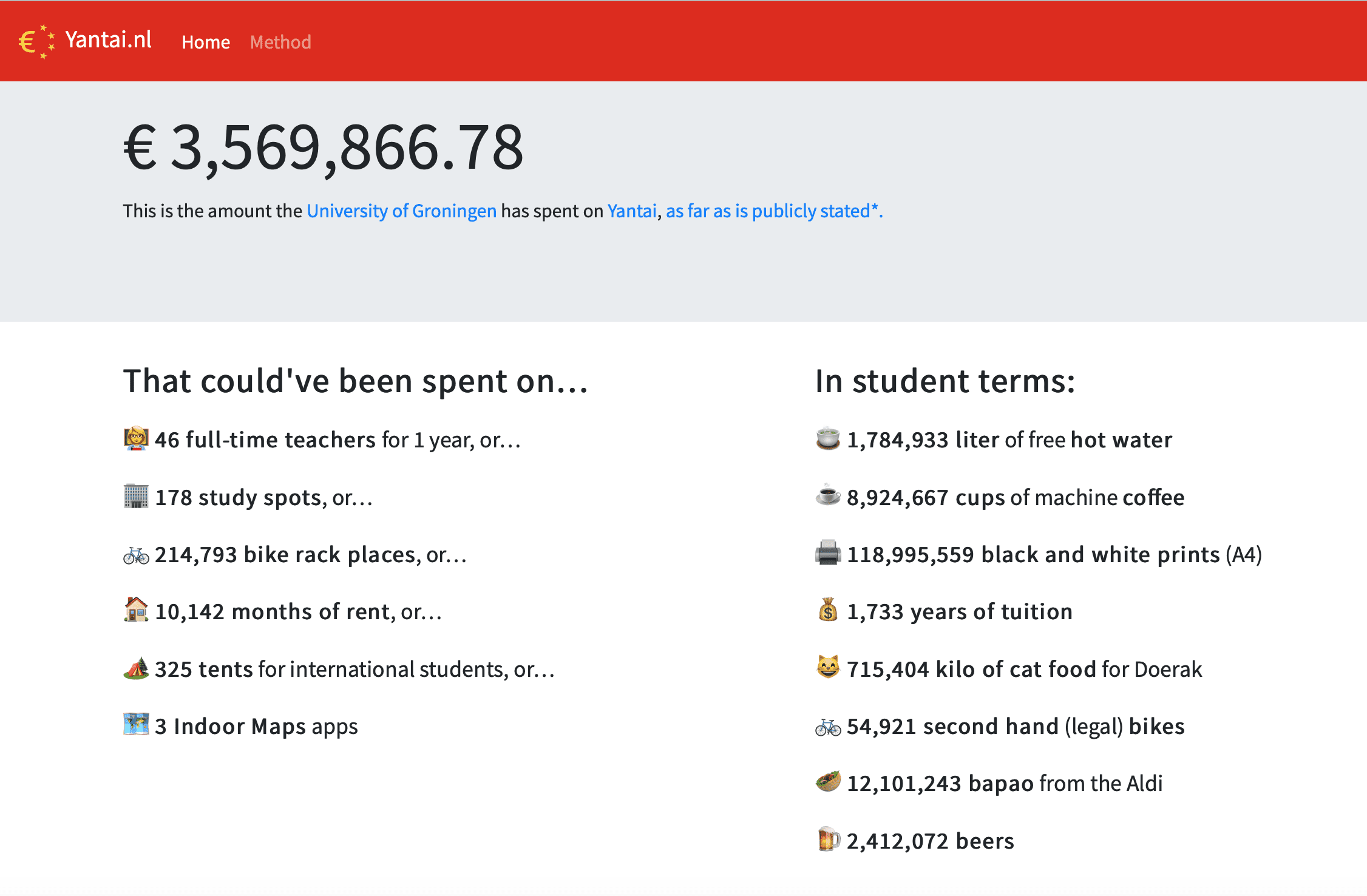 Léon Melein, a former member of the Lijst Calimero faction, built the site and is a part of an unofficial think tank called “Why, UG?”. “Why, UG” is literally the question that Melein and his classmates were asking themselves: Why is the university doing this? Why is it doing it this way?

“Yantai is not exactly an unfamiliar topic for me since I was in the university council last year”, Melein wrote via Facebook, but he says the site is not affiliated with his former party. In fact, he and a number of his fellow computer science classmates hope the site will put the reported Yantai expenses into more comprehensible terms for less politically engaged students. “With a more apolitical approach, we hope to reach students who are not traditionally interested in university politics.”

Frisian singer through to “Holland’s Got Talent” semi-final

Groningen’s Suikermarkt comes back on September 25