A demonstration that began on the Ossenmarkt in Groningen against the housing shortage for international students has turned into a sleep-in occupying the Academy Building.

The sleep-in ended around midnight when university vice president Jan de Jeu signed a document confirming that board of the University of Groningen would make a statement on Friday explicitly rejecting the current higher education financing model.

De Jeu signed. He fulfilled the demand to make a public statement about the perverse incentives in government funding to attract more and more students! #sleepinrug pic.twitter.com/Pogk6BRq9W

The University of Groningen Twitter account published four tweets about their response to the student protest. “Tonight’s results: following an intense and constructive conversation with the students, we have reached a joint solution which is primarily focused on the longer term. A covenant for student housing is being developed by the municipality and the other relevant parties (housing providers, investors, institutions). We will contact the minister of education about this matter, indicating that it should serve as a signal about the current funding model. The RUG reaffirms that it is not interested in becoming a bigger university. For students who are currently in the ACLO tents, alternative housing will be offered to them for free at the Metaallaan. With this, the protest in the Academy Building has ended.”

The group occupied the Academy Building on Thursday afternoon after a demonstration at the Ossenmarkt. Protestors walked to the Academy Building in small groups so as not to draw too much attention, and the name of their Facebook event for the protest was changed to a “sleep-in” after the occupation began.

We claimed the stairs of the Academy Building @univgroningen. pic.twitter.com/s8GODs0oW0

University vice president Jan de Jeu read the following statement addressing DAG’s hosing demands out loud in Dutch to the mostly international crowd, then summarised the points in English and then stuck around to answer the student’s remaining concerns.

When it became apparent that housing would be scarce at the beginning of the academic year, the Hanze and the RUG announced in mid-August that we would offer sleep-in facilities which would be available on the 27th of August. The sleep-in tents and the ACLO have been made free of charge and have room for 90 people, but there are currently only around 35 people in the tent. There is still plenty of room there.

The hotel boat on the Eems canal has space for 98 students. There are also rooms available at the school on the Metaallan. There is still plenty of room available there as well. In both cases, these facilities do not fall entirely under the purview of the RUG, and we cannot unilaterally make any decisions about their use. Staff at the RUG and Hanze will also be housing students in the coming weeks while they search for a room or apartment. This is currently getting underway.

The university does not have any ambitions to continue growing. We do expect that the number of incoming Dutch students will be smaller in the years to come. In order to maintain our current standards, we have welcomed international students here for years. The definitive attendance numbers are always made available in early October. Like other universities, enrolment numbers are noticeably higher this year. There are currently 800 more 1st year bachelor students, including 600 at the psychology department. For the 2019-2020 academic year, we will implement a cap on the number of students that can enrol in psychology, artificial intelligence and international business (as well as programmes that currently have caps, namely medicine, dentistry and international relations)

The academic institutions and the municipality are working together closely and are focusing on providing a permanent solution for housing for international students, especially in the interest of avoiding housing scarcity again next year. In recent years we have added many new units to the market, some of which are dedicated international student housing. There are a number of housing projects under construction across the city as well.

Research universities and universities of applied sciences in the Netherlands are in talks with the minister of education about finding a way to achieve better balance in terms of growing international student numbers (see the joint internationalisation agenda from the VSNU.)

The municipality recognises that it is important to take responsibility and has resolved to create a covenant over the coming months with the academic institutions and the parties responsible for providing housing (housing corporations and investors) regarding student housing in the years to come.

After De Jeu addressed the students’ questions for about half an hour, the members of DAG are now discussing the university’s statement to determine how they will proceed. But Maree says that he did not get the impression that the university was truly listening to their concerns. “Until they do away with the incentives to continue recruiting more international students and keep on growing or otherwise risk losing their piece of the funding pie, then they will always be playing catch up.”

Around 75 people initially showed up for the announced protest at the Ossenmarkt to draw attention to the ongoing housing shortage for international students. Members of the youth political factions of the SP (ROOD) and GroenLink (DWARS) and university political faction DAG, representatives of Groningen’s squatter collective and staff from Frently, gathered a few blocks from the Academy Building to express their continued frustration with the housing shortage international students are facing in the city. 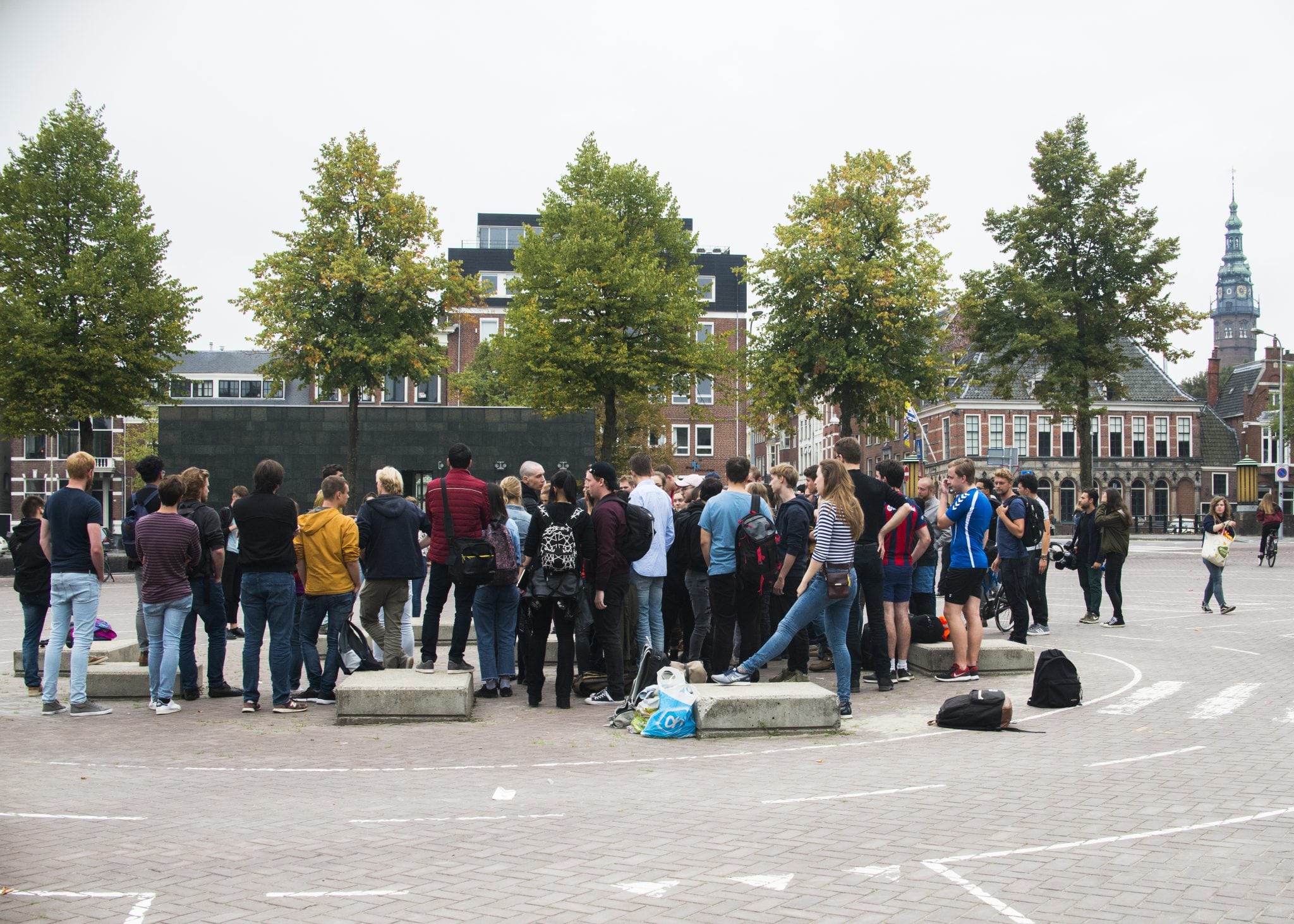 After about an hour of spontaneous speeches, the group marched from their spot on the Ossenmarkt to the Academy Building, where they are currently occupying the red steps to draw further attention to their cause. On Twitter, DAG has specified four demands: “1. All emergency housing for free. 2. The university decreases growth ambition. 3. Turn empty offices into student housing. 4. The university will publicly speak out against the growth-oriented allocation model of higher education.”

Before occupying the building, there were chants of “We want housing!” and deeply frustrated and disappointed speeches by students either currently dealing with a lack of housing or expressing their solidarity with the students still looking. There were also calls to clarify that the participants should focus their anger specifically on the housing situation and not at the University of Groningen itself, but the fact that the group has now occupied the most prominent university building clearly suggests that the demonstrators hold the university accountable for the current situation. Koen Mareé, a member of DAG in the University Council, says that the group’s plan is to occupy the building until their demands are met. He says that sleeping bags and pillows are being brought to the building, and that food for the demonstrators is also being taken care of.

Mareé told the crowd at the Ossenmarkt that there between 400 and 500 students are estimated to still be looking for permanent housing. Michael Aidi, who is pursuing his master’s degree in chemistry, had a room offered to him for a month by a family living outside the city after reading about his situation in De Volkskrant. Having no permanent address means that Aidi cannot yet apply for a Dutch social security number or officially register with the municipality. “I hope that this will get results soon and that they don’t make the same mistake next year, because it’s almost a tradition now”, he told the crowd. “It might as well be one of the touristic sights – oh look, they’re protesting again!” he said, as the crowd laughed. “I hope this gets resolved for all of us and that we can just enjoy our education.”

Lobbying for the North: Building a Hydrogen Valley

Groningers have the best sense of humor in the Netherlands, study claims

Make it in the North

Watch: A workplace that sells itself – CTO on working at Ocean Grazer