According to the International Welcome Center North, at least four people living in international housing in Groningen have reported being robbed over the past week.

One victim, Xiaoniu Huang, is a PhD candidate who lives in the Plutolaan building, which is operated by SSH. Huang posted a plea on the Expats in Groningen Facebook group for the person who stole her laptop, which had years’ worth of research on it, to return it. 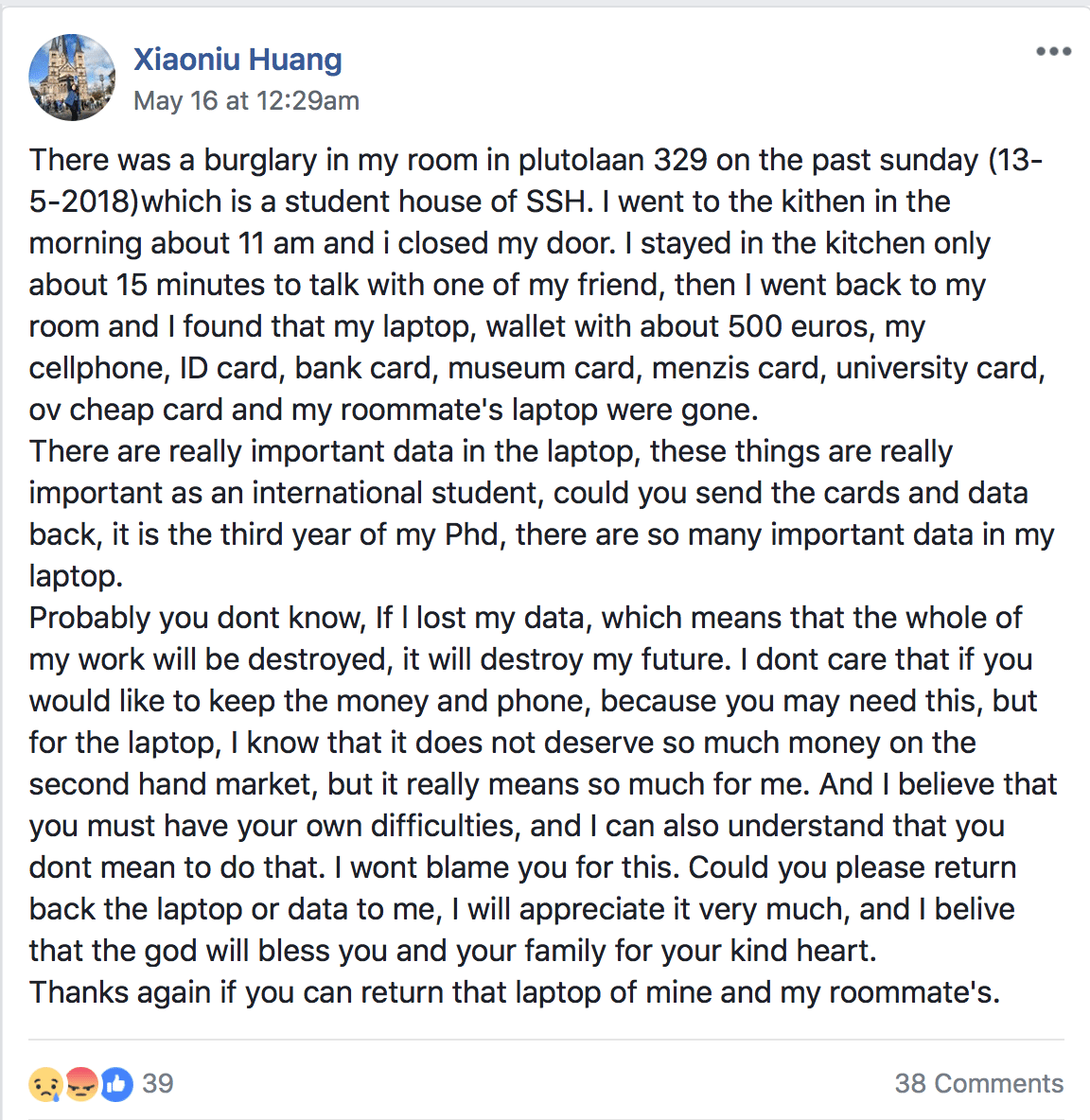 Xiaoniu’s computer – a Macbook Air 13.3 – and her roommate’s computer were taken, as well as Xiaoniu’s wallet, which held her identification card, and cellphone. The theft occurred on Sunday, 13 May while Xiaoniu was out of her room for a matter of minutes and left the door unlocked. Xiaoniu told the Universiteitskrant that she suspects the person who robbed her room was probably a fellow resident due to how far her room is from the entrance to the building.

Karen Prowse, the general manager of the International Welcome Center North, says that four residents of shared international housing have contacted them in recent weeks because some of their belongings were stolen, including their IND cards. Prowse says that in all of the cases, the residents reported that they were only out of their rooms for 15 minutes at most and had left their doors unlocked when the robberies occurred. It is not clear if all of the incidents occurred in the same building or not.

(UPDATE: SSH’s Jolien Stokroos says that there was another theft reported at one of the SSH buildings on the Moesstraat recently, but theft unfortunately occurs throughout the year in shared housing. “As much as we would like for everyone to be able to trust their fellow students and residents, people have to make sure that they never leave their belongings unattended, especially not in an unlocked room.”)

Xiaoniu, who is a PhD candidate at the University of Groningen, told the Universiteitskrant that none of the residents in the building, most of whom are also PhD candidates, lock their doors. Xiaoniu says that the police arrived after about 20 minutes but said they could not search the other rooms on the floor due to lack of proof. She also says that she was informed by SSH, the company that operates the building, that their insurance policy would not cover the theft because the door was not locked.

Ernest Zinsmeyer, a spokesperson for the police force in the Northern Netherlands, says that the department is currently looking to see if any other cases of theft have been reported in recent weeks.

Theft in international student houses is more common than in student rooms on the private market. Many of the international houses have hundreds of residents who frequently come and go, which makes it slightly easier for an unfamiliar person to slip into the building unnoticed. Theft is also more common during warmer months of the year due to open windows and doors.

UPDATE: Stokroos, the team manager for SSH in Groningen, says that SSH does not provide insurance coverage or damage compensation for its residents. “We always send someone to help our residents if they have been victims of theft and we encourage them to file a police report, because the police are the only ones who can legally review the security camera footage. But we cannot compensate anyone living in our residences because that is not how it works.”

Stokroos also understands how frustrating and upsetting theft can be, but there is no legal grounds for SSH to search the rooms of other residents. The police cannot carry out a search without a warrant. “We wish it wasn’t the case, but all that students can do is make sure that their belongings are insured and that they always lock the door behind them.”)

(Editorial note: The International Welcome Center North is a partner of The Northern Times)

Airport Eelde to the rescue? Available for extra flights amidst Schiphol crisis

Why is Friesland one of the top destinations in Europe? (+VIDEO)