Seeking resolution at the Sugarhomes

International students have been living in the Sugarhomes for three months now, and residents say that there is still room for improvement. Some tenants have started taking matters into their own hands, but what does the future hold for the containers and the wider area?

The bright red writing was literally on the wall as six students sat down over tea and coffee on a drizzly January night. The unmistakable message of “SOLIDARITY” was emblazoned along the entire length of the Socialist Party headquarters, where four members of ROOD, the youth branch of the SP, and two foreign students came together to talk about how to improve the situation at the Sugarhomes.

The gathering did not exactly draw a huge crowd: the international students living in the containers were busy studying for exams, but one resident who did show up, Barbara Boehm, said that a lot of tenants have either moved on or moved out. “I thought about not coming myself. This situation is so tiresome, and there’s been so much talking already”, Boehm said. “I think most people are trying to find something else.”

Even before foreign students moved into the 249 short stay containers known as the Sugarhomes in October, the housing project was beset with issues. The units were completed several weeks behind schedule, and local interest groups expressed concerns that their location would isolate the residents. When the students were able to move into the units, dozens reported having to clean them themselves before settling in.

Throughout the past few months, ROOD has been speaking out about the housing challenges international students in particular face. Along with members of DWARS, the GroenLinks youth branch, and university council faction DAG, they protested outside the Martinikerk in September at the opening ceremony for the academic year and took part in the occupation of the Academy Building.

The main goal of the meeting in early January was to talk about further action, be it public or private, to rectify what ROOD members see as a “morally corrupt” situation. “If housing is a problem in the city, then why is Rizoem profiting off it?”, Bram Dingelstad, a member of ROOD, asked the group.

Miranda Rijk, a project developer at Rizoem, says that a meeting between the real estate company and the political group was scheduled for last week, “but ROOD unfortunately cancelled it.” But several other students have also sought outside support to help fix what they see as problems at the containers.

A group of 15 residents has been working with De Huurdokters, a national organisation that seeks to mediate between tenants and landlords for fair rent conditions. Hanne Pollet, a Belgian student on exchange at the law faculty of the RUG who lives at the Sugarhomes, says that she got in touch with De Huurdokters in October. Pollet says that the group reached out to Rizoem in early January, but the meeting did not yield any concrete solutions. It has now been submitted to the rent commission (based in The Hague), who will rule on the case in a few weeks. Rijk from Rizoem confirms that the De Huurdokters have been in touch, but stated that any course of action by the group or any similar organisation was irrelevant because the rooms are short stay.

Pollet, who will be moving out of the Sugarhomes in a few weeks, says that she is actually happy with the location and amenities. “You get a lot of private space and they are not too far from the centre. It’s really nice to have so many friends that live right next to you, too. So considering that, there’s also a lot of us that don’t really want to move.”

But the pros do not outweigh the cons: internet, water and electricity outages have been more than a mere annoyance. “I have very expensive injections for an auto immune disease that need to be kept cold at all times, so I’ve had it already three times now that the electricity fell out and I needed to rush to a friend’s place to keep them refrigerated.”

On top of that, the infrared heating systems in the units were not working during a cold spell in October and pile driving for residential construction shook the buildings and exposed them to noise levels of up to 86 decibels in November. Another fundamental issue has been getting to and from the grounds, and the poor condition of the unpaved terrain. 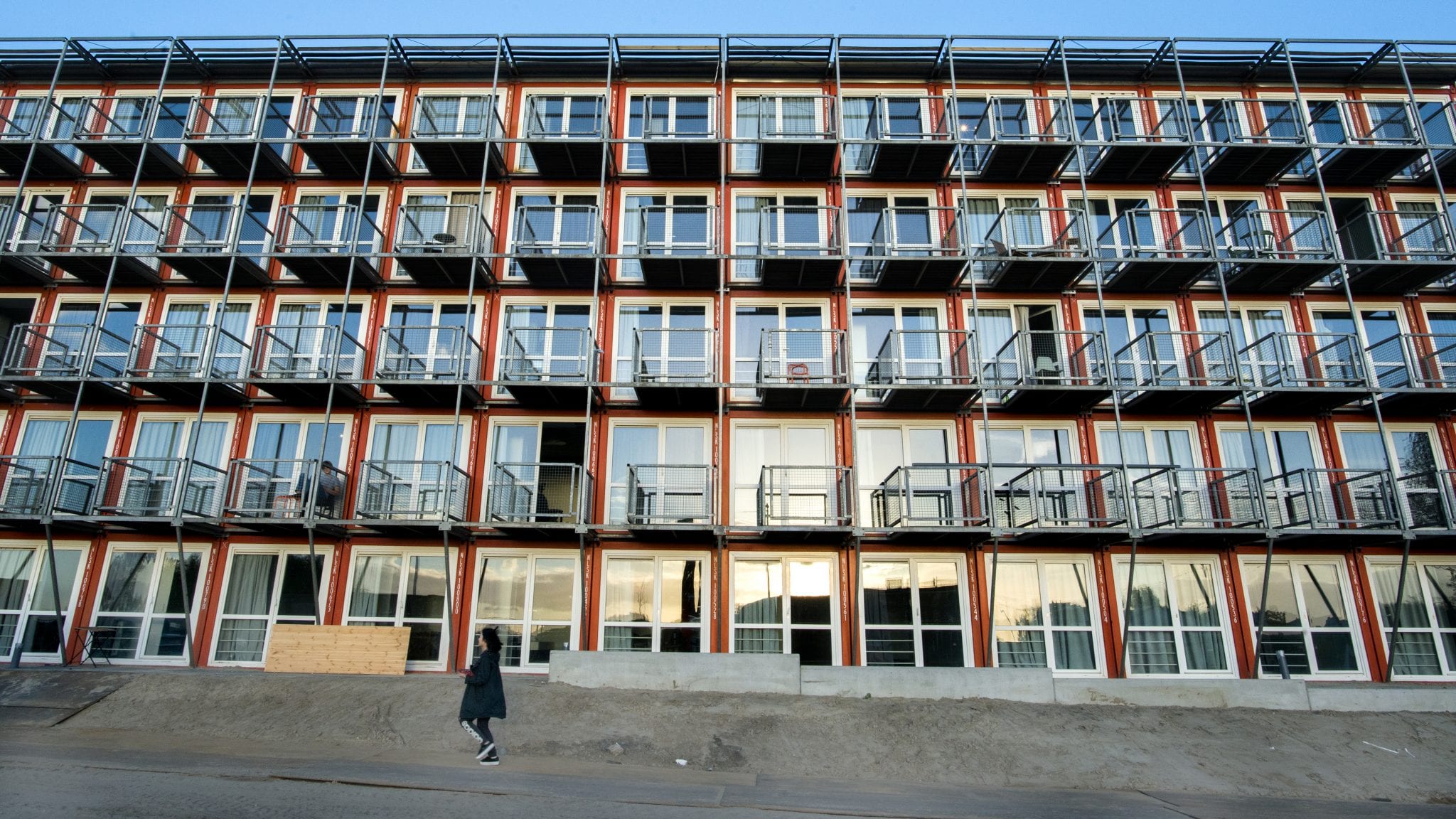 “Everything was done in the opposite order”

Residents are supposed to use a metal bridge, around 350 meters from the containers, to enter and leave the site.  But the rocky route to the bridge can be treacherous, especially after rainy days, and some students have chosen to take an extremely dangerous short cut across the on ramp to the motorway.

Chris Garrit, owner of the neighbouring EM2 music venue, spoke out about the accessibility situation in December because he was concerned for the students’ safety. As a former night mayor of the city, Garrit uses his public podium to draw attention to issues in the city from time to time. “Mankind has been building for hundreds of years, but you have to start with the road to get there”, Garrit says. “In this case, everything was done in the opposite order, and I think it’s just irresponsible. I was just seeing students crossing the damn road (Laan 1940-1945) every day.”

Rijk says that Rizoem is very aware that the grounds can be tricky for even the most experienced cyclist to navigate, particularly in the winter, which is why area was resurfaced in early January. Rijk also says that the company “strives to be open and accessible for the students to contact them about issues at the property at all times”, but Pollet says that it often feels like Rizoem dismisses complaints rather than addressing them. “They’re always blaming it on someone else instead of taking responsibility, and that’s very frustrating.”

“We need the issues to get solved”

As the small early January gathering at the SP offices wound down, Boehm reflected on what she likes her flat and mused about ways to improve them further. “You can make it nice, and I can imagine in the summer it will be even nicer. Maybe they could turn one of the containers into a bar.” Rijk says that there are some upgrades planned for the area this spring, including a beach and potential volleyball or basketball courts.

Rijk also emphasised that the area is under development, which the students have been made abundantly aware of. While many residents may appreciate the industrial vibe of the grounds, for Pollet, Boehm and hundreds of other international students, the potential appeal of the area does not diminish their desire to improve living conditions for themselves and for future residents. “We need the issues to get solved”, Pollet says.

Code yellow for entire country due to expected snow showers

Snowy scenes across the north

Snowy scenes across the north