According to Arriva, the majority of their services will not be running on Tuesday. In Friesland, the transport company writes that the trains and buses will not be running on the mainland (except for lines 166 and 66 between Leeuwarden and Holwerd). Arriva bus service on the Wadden islands is expected to run a normal schedule, and local buses are also supposed to be operating normally. In Groningen and Drenthe, Arriva trains will not be running, but a definitive decision about bus lines 304, 314 and 324 has yet to be made. 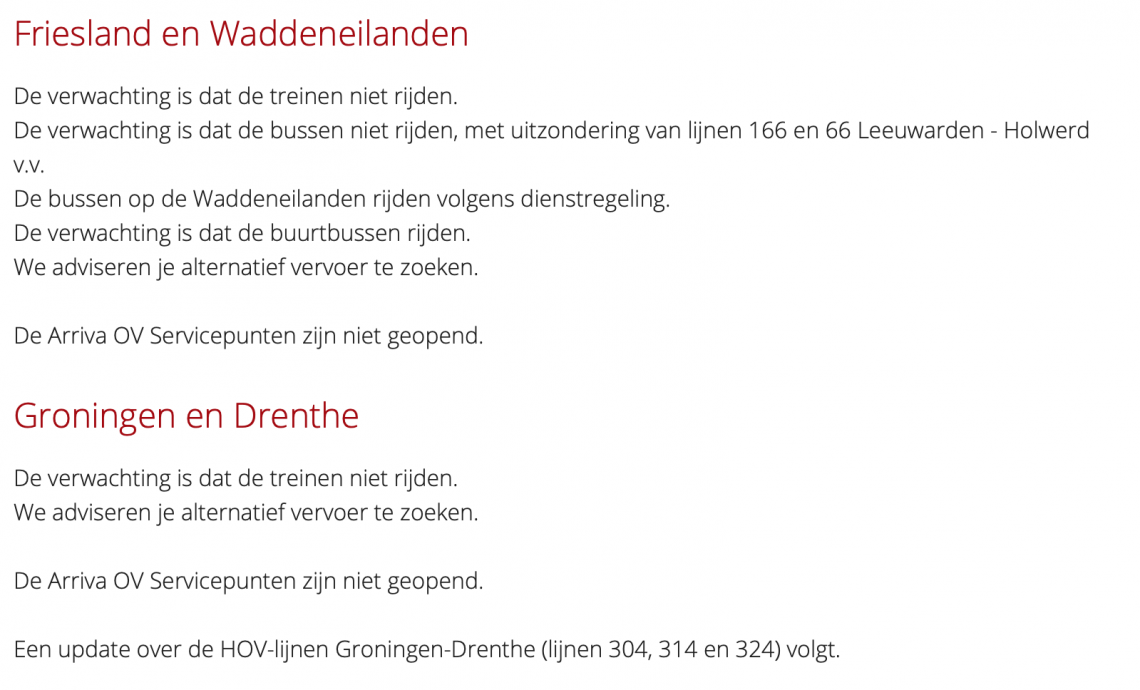 As for Qbuzz, the bus company writes on their site that the exact bus lines which will be impacted will not be officially known until the 28th.

Universities and schools across the region are holding final exams this week, and some institutions will permit students to retake the exams if they are unable to travel due to the strike. The Hanze University of Applied Sciences has arranged for shuttle buses in the city but has advised students to contact their faculties if they are unable to make it. The University of Groningen will be moving forward with normal educational activities, but there will not be any consequences for students who cannot make it to campus.

The participating labour unions are VVMC (which represents Arriva), FNV Spoor (which includes QBuzz) and CNV Vakmensen. RTV Noord reports that the unions say that there is still no realistic agreement in sight to improve conditions, namely freezing retirement age and making it possible for people who do physically taxing work to be able to retire sooner.

Many NS trains will not be running at all on the 28th, and the majority of regional public transport companies will follow suit. The Arriva press office confirms that the unions representing their employees have indicated that they intend to take part in the strike, but the company cannot yet say what the scope of the strike will be and how that will impact travellers.

Marike Timmermans, a press officers from the VVMC union, which represents the rail company, says that the union is currently determining the scope of the strike: several of the union’s board members are train conductors and machinists themselves. This story will be updated with more specific details once they are available.

FNV press officer Mariëtte van Dijk says that as of Thursday, the majority of the QBuzz services in Groningen and Drenthe will not be operating on the 28th. “We are still taking an inventory in the region and we should be able to share more specifics next week”, Van Dijk says. The press officer also emphasised that it is difficult to say exactly which lines will or will not be in service and that individual drivers may still choose to show up for work as normal.

In March of 2019, NS and other public transportation employees held a 66-minute-long strike, symbolic of the age at which the unions want the retirement age to be capped. There was also a series of national and local transportation strikes for better pension conditions last year. Other sectors such as metal and construction are set to strike on the 29th of May.

Neighbourhood of tiny houses coming to “Lutje Westpark” in Groningen

Lonely Planet: "These are the ten best bars and cafes in Groningen"

Lonely Planet: "These are the ten best bars and cafes in Groningen"

Government plans might cost University of Groningen millions in funding