North of North: Delfzijl and Appingedam

by The Northern Times
in Typical Dutch
0

Groningen is the Netherlands’ northernmost large city, but what lies beyond – and above – is well worth a day trip.

Groningen is a mere 30 kilometres away from the Wadden Sea, and the trading history of the city is intertwined with its proximity to the seaport of Delfzijl, which is the largest port in the north. The waters of Delfzijl are linked to Groningen by the Damsterdiep canal.

A lesser known counterpart to this trading success is Appingedam; a bucolic city that once posed a huge threat to the dominance of Groningen as the preeminent trading hub in the region. Appingedam sits roughly halfway along the Damsterdiep and is an easy 15-minute hop away by train from either Groningen Hoofdstation or Groningen Noord.

A series of medieval conflicts between the two cities were key to shaping the history of the region, and both modern-day Delfzijl and Appingedam are well worth a day out.

Situated at the spot where the Eems river empties into the Wadden Sea, the port city of Delfzijl is the quickest way to the northern Dutch coasts from the city of Groningen. Though primarily an industrial port, it is still perfectly capable of covering the bases for a lunch by the sea side. Just a short walk from the station, over the sea dyke, the Eemshotel is perched on stilts and offers sweeping views of the waters of the North Sea (which were steel-grey on the particular day I visited). The hotel, which is currently run by Bert and Jannie Boer and was the only hotel in the Netherlands literally located on the water when it was built in the 1960s, is an excellent place for a coffee and getting a lungful of sea air, especially from its renovated terrace which reopened in June. 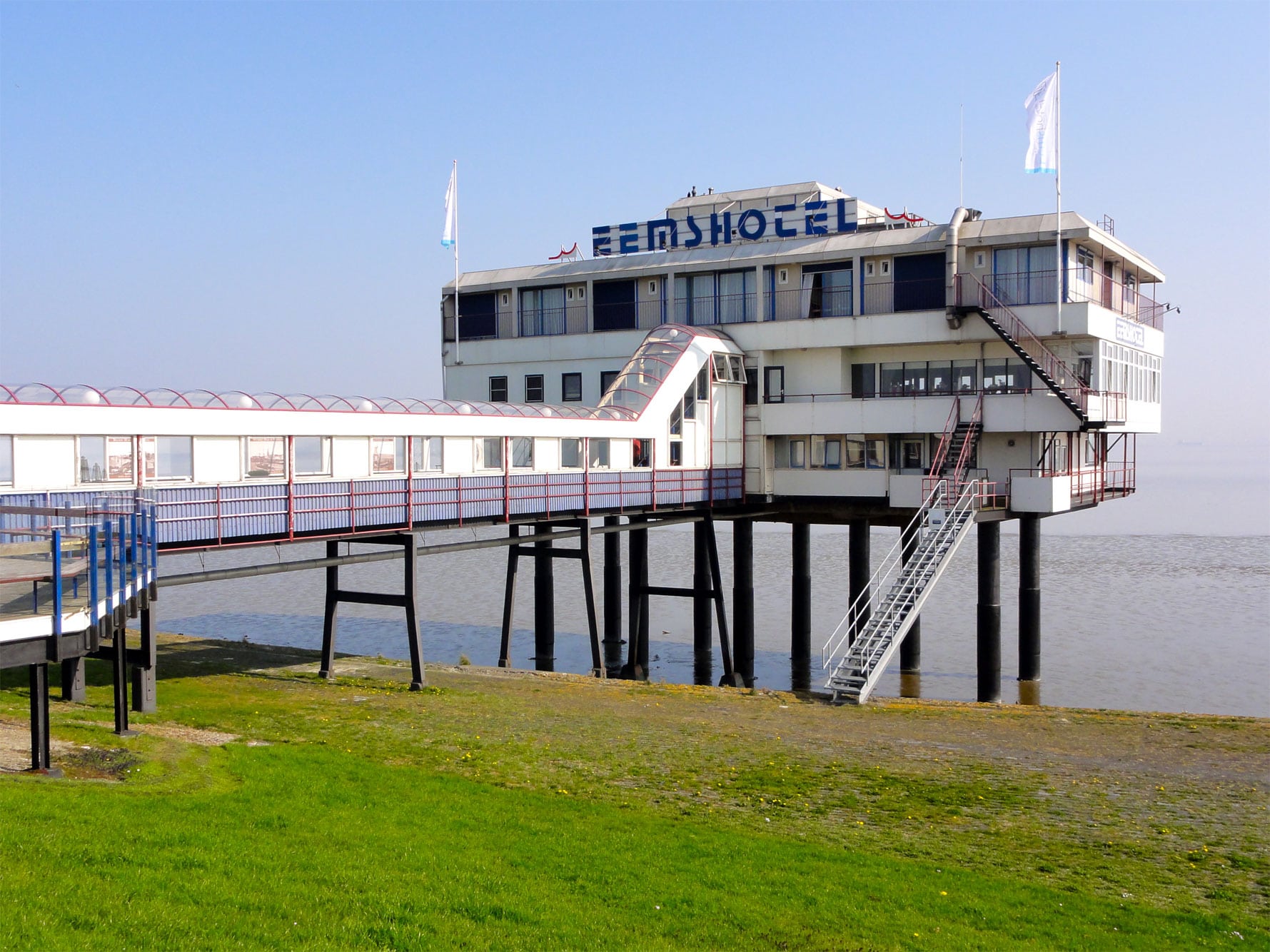 Whilst the restaurant at the hotel has a tempting menu, the best lunch in town is to be had is at De Kleine Zeemeermin (the Little Mermaid). Wander from the hotel past the small but well-kept public beach and awe-inspiringly large port, and the restaurant suddenly appears, seemingly floating in the sea. Like the hotel, De Kleine Zeemermin is also on stilts, and being so close to the sea and chowing down on fresh-fried fish (kibbeling) surrounded by its welcoming interior makes this beloved Dutch snack taste even fresher than on the streets of Groningen or Leeuwarden The massive serving of sole definitely satisfies the sea-breeze induced hunger. 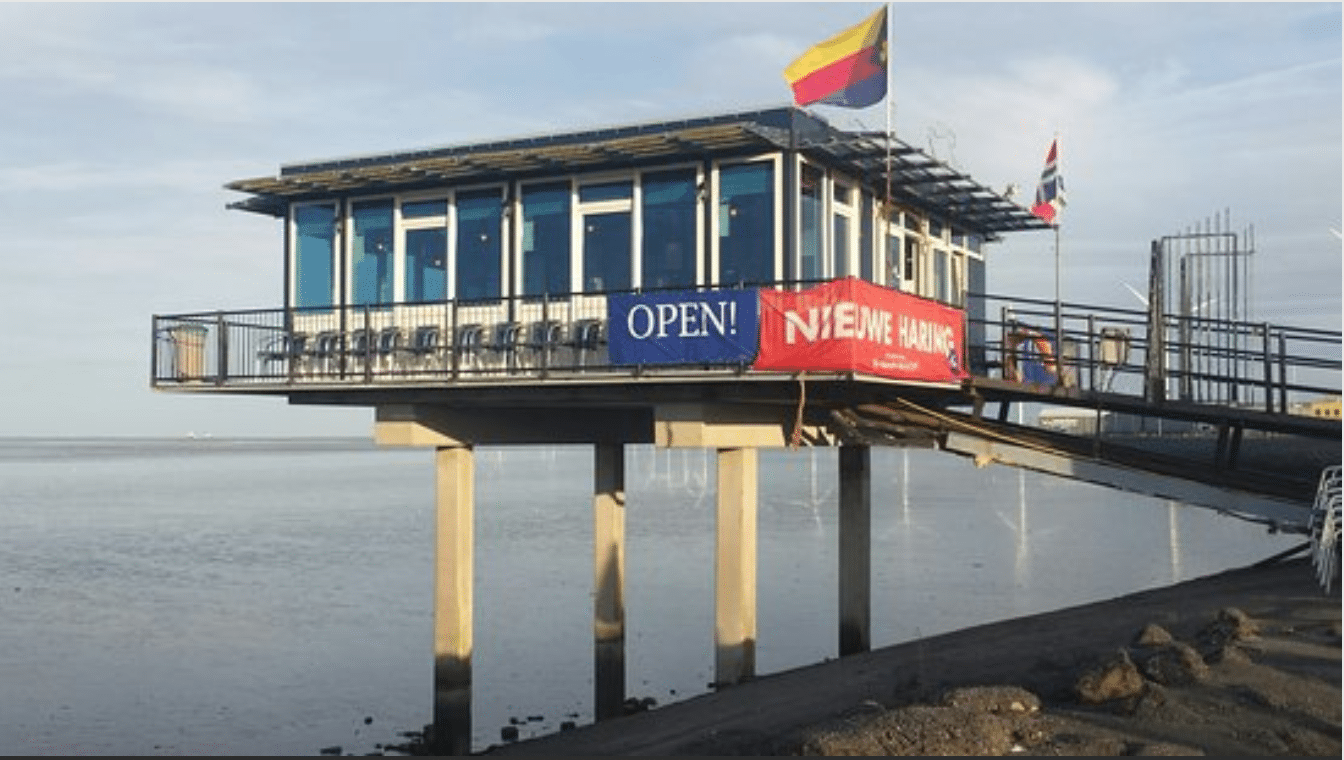 Before moving on to Appingedam for the afternoon, walk off that hearty lunch by visiting the windmill which has been converted into an art gallery in the centre of town. No trip to Delfzijl would be complete without checking out the Grote Waterpoort, which has protected the city since 1833.

An afternoon of history in Appingedam

You can either cycle the five kilometres between Delfzijl and Appingedam along the scenic Oude Eemskanaalor take the train (which is a little outside the city centre). No one is entirely sure how long Appingedam has been inhabited, but it still thrives along the route of the Damsterdiep, its tributaries curling through the city and creating tiny islands between the waterways. It developed into a bustling port city in the 15th and 16th centuries and once upon a time posed a threat to the economic dominance of Groningen, but a series of armed conflicts led to the destruction of city in 1536. In the 19thcentury, Appingedam found a new source of wealth in the steam industry, both from steam-operated machinery and engine manufacturing.

Stroll down the medieval cobblestone streets and check out the famous hanging kitchens above the Damsterdiep (best viewed from the Kniestraat) and stop by the Museum of the City of Appingedam, which features an intriguing collection telling the story of the city. Before leaving town, stop by the VVV tourist centre to learn about the long and tragic history of the synagogue and Appingedam’s former Jewish population, the first Jewish settlement in the province.

The streets of this compact city are packed with interesting little cafes and restaurants; the Restaurant De Basiliek inside the Nicolaas kerkjeis highly recommended for its gorgeous interior and its impressive menu of modern European classics. For coffee (or a beer), wander past the flint and brick town hall through to the Paviljoen Overdiep, and have a drink overlooking the charming harbour.