by Yelena Kilina
in Education
0

A team of students from NHL Stenden has become the big winner of the ‘Gamechangers Innovation Award’. The hard battle between educational institutions in the Northern Netherlands has yielded one absolute winner. Jury chairman, Xandra Groenewold, presented the Gamechangers Innovation Award, known until this year as the Battle of the Schools, on Thursday during Trend, where NHL Stenden won against fellow nominees Noorderpoort and Friese Poort Leeuwarden. Friese Poort was rewarded by the jury with the Technical Award.

48-hour hackathon: a clash between education

The presentation during Trendship was preceded by a 48-hour hackathon in which eight educational teams participated. All teams have an IT and / or multimedia background. Each team received its own client for the hackathon. The three best teams, determined by a jury, went through to the final round, where they took on the ultimate challenge: a pitch for 2,750 pairs of eyes. In other words: a packed Martini Plaza. NHL Stenden won gloriously. They picked up the jury votes the day before and during Trendship the votes of the audience. On the spot, 53 percent of the audience voted for the pitch of NHL Stenden.

NHL Stenden was given the challenge by their client Rabobank to make young people aware of debts and to learn how to deal with them. 48 hours later they came up with Buffel, an app that makes it fun to save and gives young people insight into their financial housekeeping. Buffering for a new scooter? Buffering for new sneakers? It’s possible with Buffel. 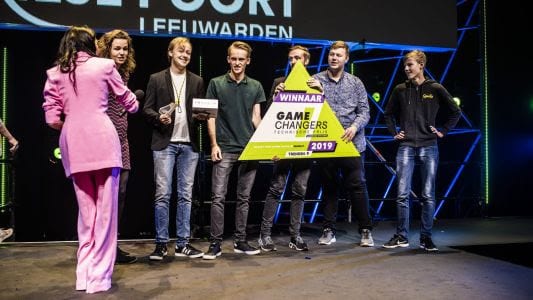 The cutest video of the week: Sheep playing football in Drenthe

Music and dialects: Daniël Lohues is on tour with Holland Baroque orchestra

Music and dialects: Daniël Lohues is on tour with Holland Baroque orchestra