Schaap spent two days touring Groningen and Friesland last week, and will be available at the IWCN in Groningen

As reported by the Omrop Fryslân, the new Honorary Consul for Romania was officially installed on Thursday and Friday of last week. Reinder Schaap, of Heeg (Gemeente Súdwest-Fryslân), was named as Honorary Consul in February, but had to wait for his ceremonial presentation due to the Coronavirus outbreak.

Schaap spent time working with the Dutch government fostering economic and cultural ties with Romania: “I lived in Romania for three years working for the Dutch government, and retired in 2015. I continued to maintain contact with friends in the country, and also with the Romanian Ambassador in The Hague. It became apparent that the previous Consul had left their post”, said Schaap.

An Honorary Consul is a normal citizen that is asked by a country to work with its overseas citizens and look out for their interest. “The Consul has, in principle, three main tasks. One is consular, as in helping Romanian people that are here and have problems, the second is to help expand economic ties, and the third is to facilitate cultural exchange”, says Schaap.

“But the consular part of the job has decreased a lot in recent years”, says Schaap, “on the one hand because Romania is an EU member so its citizens generally have fewer residency issues- and on the other hand that some tasks have been rolled into the existing Romanian diplomatic machinery and have become a bit more centralised.” 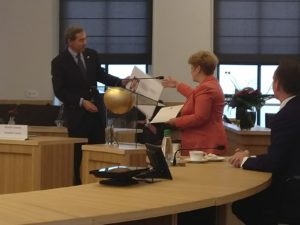 So the role has become somewhat more about the economic and cultural ties between the countries. “Romania is a somewhat complicated country, but we can certainly help each-other. In Romania, production costs are really low, but at the same time there is a lack of expert technical knowledge”, says Schaap. “Romania has a significant amount of potential in, for example, agriculture. There’s room both in terms of space and room for entrepreneurship.”

Schaap made no comment about the cultural ties between the countries.

On Friday, the new Honorary Consul toured the International Welcome Center North (IWCN) in Groningen, where he will be able to meet both Romanian citizens and anyone that would like to know more about the country.

Arminia Bielefeld supporters cause havoc in Groningen on Saturday

Arminia Bielefeld supporters cause havoc in Groningen on Saturday