The Groningen Nobel laureate Ben Feringa has made a groundbreaking discovery, together with researchers from the East China University of Science and Technology. They were able to produce a complex polymer in a simple way that could possibly be used in adhesives, self-repairing materials and degradable products.

Polymeric materials can be very versatile, but this comes at a cost. Complex functionality such as self-healing usually requires a complex synthetic process. The challenge is to prepare polymeric materials with integrated sophisticated properties using extremely simplified routes. University of Groningen organic chemist Ben Feringa, along with colleagues from the East China University of Science and Technology, has done just that. In a paper published in Science Advances on 27 July, they describe how to make a versatile polymer through a simple process.

In the paper, they begin with a natural molecule called thioctic acid. By melting this solid thioctic acid at 70 degrees Celsius and then cooling the material, a polymer is formed. However, it is not very stable. To counter this, Feringa and his colleagues added the compound 1,3-diisopropenylbenzene (DIB) and Iron(III) chloride. By merely adding the compounds before melting the thioctic acid, connections that stabilize the polymer were created.

Although the production is very simple, the resulting material has complex properties. Its mechanical properties are excellent. The material doesn’t crack under pressure and cutting it with a knife is not easy; nevertheless, the polymer can also be stretched up to 150 times its original length without breaking. Scratches on the surface will self-heal at room temperature and when freshly cut surfaces are pressed together, they will fuse and the resulting structure will have a strength comparable to that of virgin material.

The polymer also tends to attach itself to different surfaces by forming hydrogen bonds, which means it can be used as an adhesive. After heating the polymer to its melting point, the liquid was used to glue two glass slides together. A weight of 5 kg could be hung from slides bonded by a 2 x 2 cm glued area. The authors conclude that ‘this simple copolymer might have major potentials in the fabrication of adhesives, self-healing materials, and wearable and biodegradable devices.’

On 26 August the European Chemistry Gold Medal Award will be presented to Ben Feringa. This new award was founded by the European Chemical Society (EuChemS) and honours a scientist who has made outstanding contributions to the field of chemistry. ‘Not only is Ben a fantastic scientist, he is a great ambassador for the field of chemistry, a gifted communicator and a source of inspiration for many scientists in Europe and the rest of the world’, says EuChemS board member Saskia de Vies. 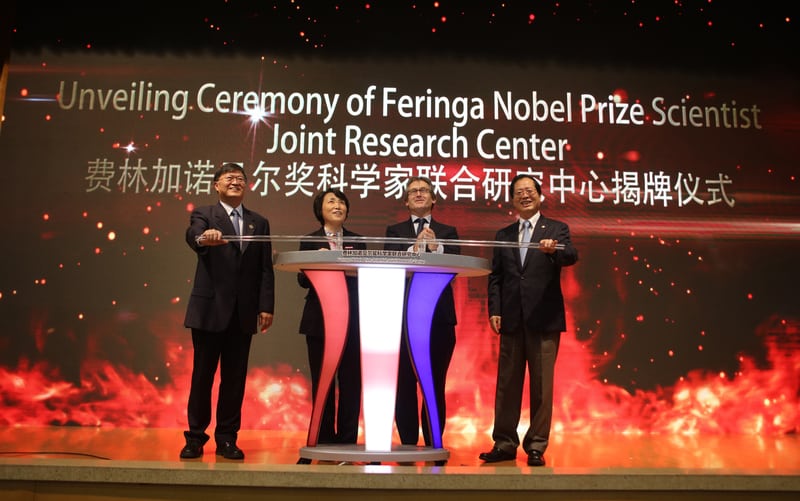 LinkBundle: happy after transfer from London to Groningen

Leeuwarden and Fryslân get their own Monopoly board game

Leeuwarden and Fryslân get their own Monopoly board game

Turftorenstraat tenant fights back against scam