Memorial stone at former Jewish hospice to be unveiled in September

On the first of September, a memorial stone will be officially unveiled at Beth Zekenim, a former hospice for Jewish residents of the city of Groningen who died during the Second World War.

The Groninger Internet Courant reports that the square in front of Schoolholm 26 will receive a memorial stone in remembrance of the Jewish residents who lived in the hospice up to World War II.

The property next door – Schoolholm 24 – was originally purchased in 1886 by Stichting Beth Zekenim (Elder Care House Foundation), and expanded over the years into at Schoolholm 26. In 1932, the complex was modernised and housed a prayer room, separate sleeping quarters for men and women, staff offices and waiting rooms.

On 9 March 1943, the building’s residents were evacuated by occupiers, and the property was taken over by the Hitler Youth and labour deployment organisers. All 28 of the elderly tenants living there at the time were taken to the Westerbork deportation camp, and the majority of them were subsequently transported to the Sobibor camp.

After The Netherlands was liberated, the building became the first port of call for Jewish survivors of the war from the region. Over the post-war years, the property served various functions and eventually became a (noon-denominational) retirement home once again. The current owner, Joop Woldring, came up with the idea to add a memorial stone next to the main entrance in remembrance of the former hospice residents who were killed during the war. 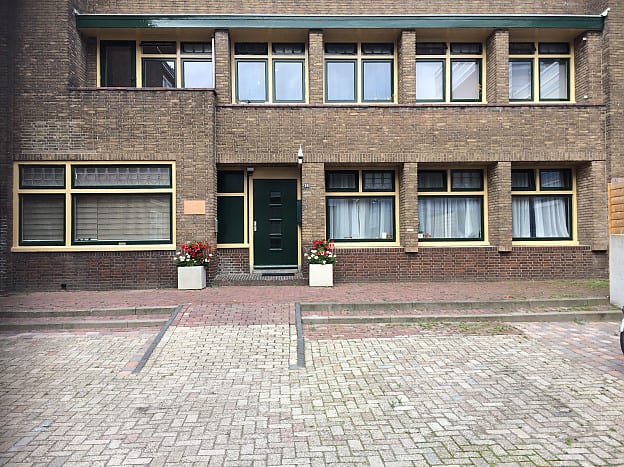 The memorial, which was designed by Olga Wiese, will be officially unveiled on 1 September at 2 p.m. by Frits Grunewald, the current chairperson of the Jewish Municipality of Groningen. After the unveiling, a reading will be held in the synagogue on the Folkingestraat by Winnie van Hasselt, the granddaughter of one of the members of the Elder Care House Foundation.

The beginnings of a Jewish quarter in Groningen were documented in 1744, and by the end of the 18th century, there were about 400 Jewish people living in the area around the Folkingestraat: the rough borders are the Zuiderdiep, Schoolholm, Vismarkt and the Haddingestraat. The area was home to Jewish school on the Haddingestraat; the rabbinical residency on the Folkingestraat; a hospice on the Schoolholm; and two other smaller temples on the Zuiderdiep and the Folkingedwaarsstraat.

Jewish people existed in the Netherlands hundreds of years before the Nazis, and Dutch Judaism should not be exclusively defined by what happened during the war. In a three-part series, The Northern Times sheds light on what life was like in the Jewish quarters across the north, starting from the first Jewish settlers arriving from Germany in the 18th century, the history of the refugee and deportation camp Westerbork in Drenthe, and what the legacy of the Jewish inhabitants of the north is to this day.

A Guide to Leeuwarden attracts nearly 50,000 visitors in six years