by The Northern Times
in contributors, International students
0

A group of internationals dedicated their summer to learning Dutch at the Language Centre of the University of Groningen, so we spoke with them about their favourite words in Dutch and their struggles with when it comes to learning and speaking the language.

Sharon Stephen (20), who is from Costa Rica and is studying chemical engineering at the RUG, says that being able to speak Dutch means having the opportunity to move out of the student bubble and integrate into Dutch society. “I feel like I would be more integrated into the country. I’ll be able to hold conversations with locals and connect with them better.”

“To be fully integrated, you definitely have to speak Dutch”

Sergio Garmendia Lemus (26) from Mexico is enrolled in the energy and environment programme, and his main reason for studying Dutch during the summer is to engage with society. “It is really polite to learn at least the basics if you’re staying in a country for longer.” He sees being able to speak Dutch as a way to help him integrate as well. “I am part of a cycling team at ACLO, and we are only three internationals and around 60 Dutch people. So whenever we’re all together, they never switch to English. Sometimes it is difficult to follow the conversation. So to be fully integrated, you definitely have to speak Dutch”, he says. 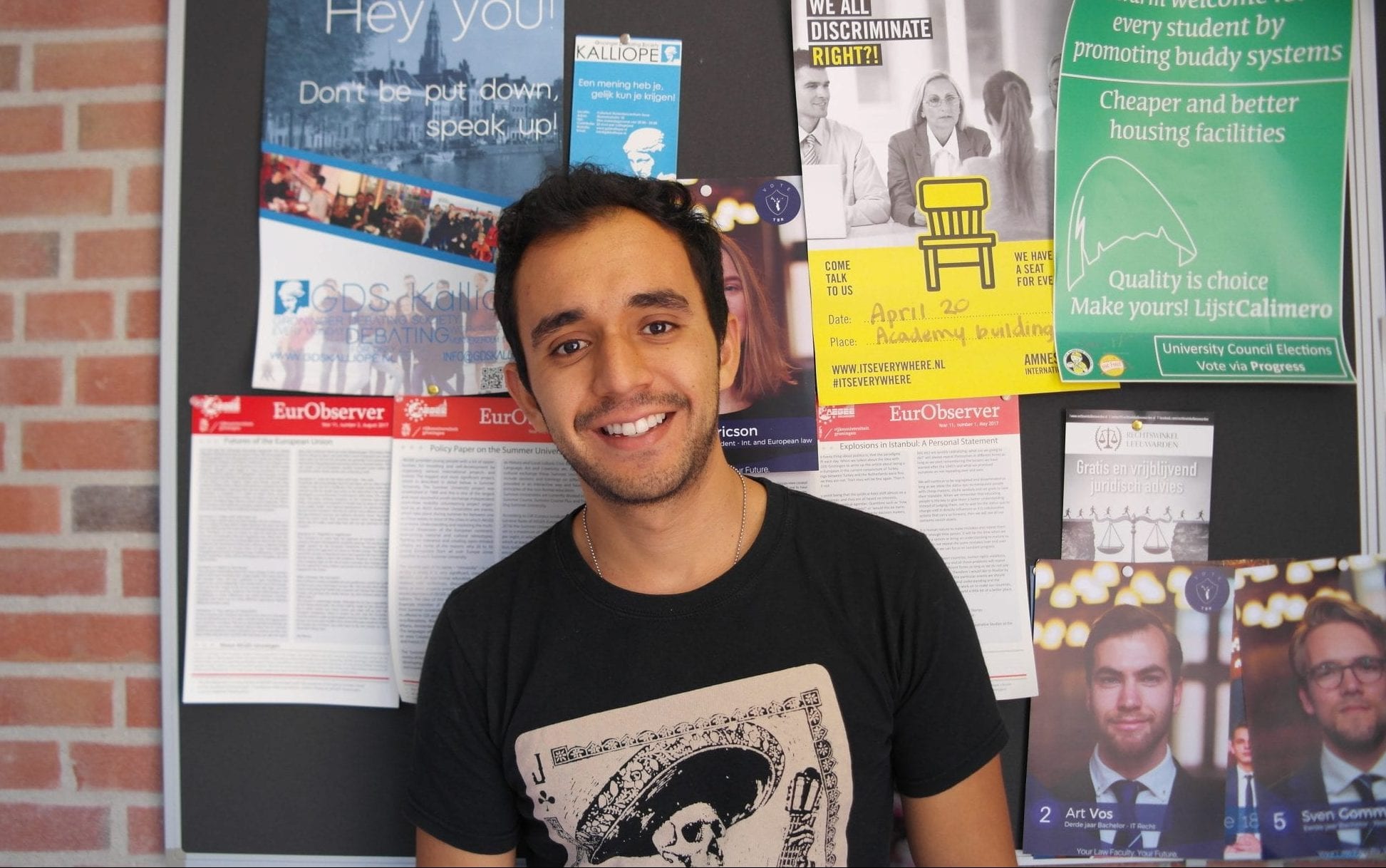 Sergio’s favourite word in Dutch is lekker (delicious) because you can use it in many different ways, not just for food. He had already joined a Dutch course before he started his bachelor’s degree in Groningen, but as his studies got super busy, he has only now found the time to pick up where he left off. Something that he struggles with is “whenever you try to practise what you have learned in Dutch, Dutch people switch to English. It is the easy way out for both sides. If they speak Dutch to you and you don’t understand them, they have to repeat it again and again.”

“I would love to answer in Dutch because it flows better”

Johanna Harms (21) from Germany, a student of English language and culture, describes herself as one of the lucky ones: when signing up for the course, she was told that German speakers learn Dutch twice as fast as non-German speakers. “We have three weeks to learn Dutch to a level of B1. A lot of words and grammar are similar, so you don’t have to explain a lot of things to German speakers.”

After two years of studying in Groningen, Johanna wants to use this last year to learn Dutch, and she sees herself living in the Netherlands after finishing her degree. “I always felt like there was a part of me that doesn’t really fit in. I know that this city is very international. I want to actually feel like I belong here, especially when I will be living here for such a long time!” 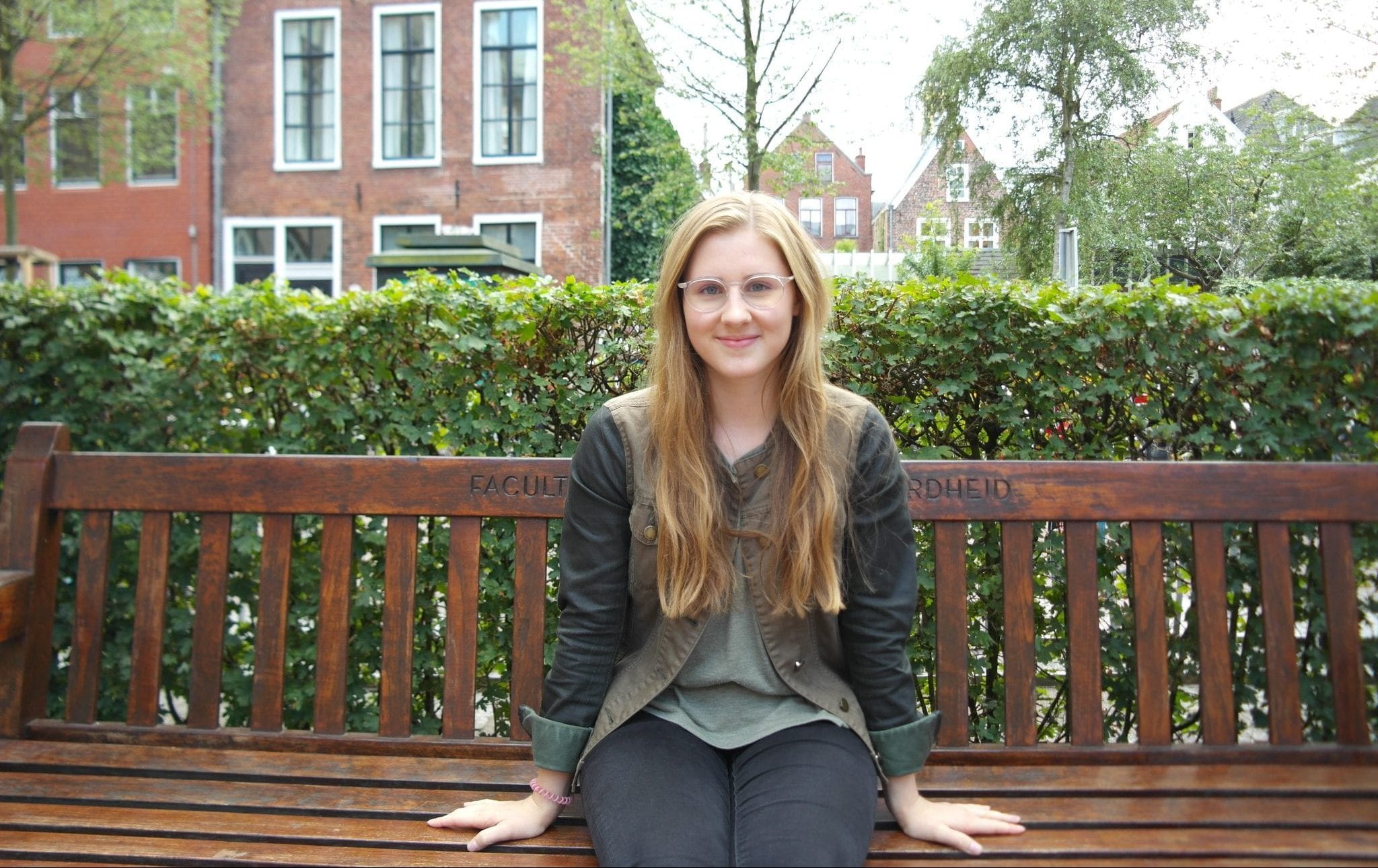 In her experience, it has not been very difficult to get into contact with Dutch people: 80 percent of her classmates are Dutch. “Obviously, if you’re a Dutch person studying English, you are used to speaking in English with all your international friends. So even if I would speak Dutch to them, they wouldn’t really respond in Dutch”, Harms remarks. In general, she thinks that speaking Dutch is useful because she would be able to keep a conversation going. “When someone asks me a question in Dutch I would love to answer in Dutch because it flows better.” However, when she asks them to repeat the question in English, a lot of people respond with ‘never mind’. “It really interrupts the conversation, and there is this wall between you and the other person because you do not speak the same language.”

Even though speaking German gives her an advantage, she still struggles with Dutch pronunciation and “false friends”. For instance, the past form of kopen (buy) is gekocht in Dutch, while kochen in German means cooking. So Harms would accidentally say “I cooked new shoes!” instead of saying “I bought new shoes!”

Harms says that she is most looking forward to being able to communicate in Dutch.  “I just want to experience what it is like to speak to Dutch people in their native language because I think it makes a difference!”

“I want to consider this country my new home”

Calvin Chan (32) from Hong Kong, who is studying international and European law at the university, has dedicated his spare time this summer to learning Dutch. “Because I have a long-term plan in this country – I am escaping Communism in China – I want to become a Dutch citizen, and one of the requirements is being able to speak Dutch. I want to consider this country my new home, so I have to find a job here eventually, and you can’t find any jobs without speaking Dutch”, Calvin says. 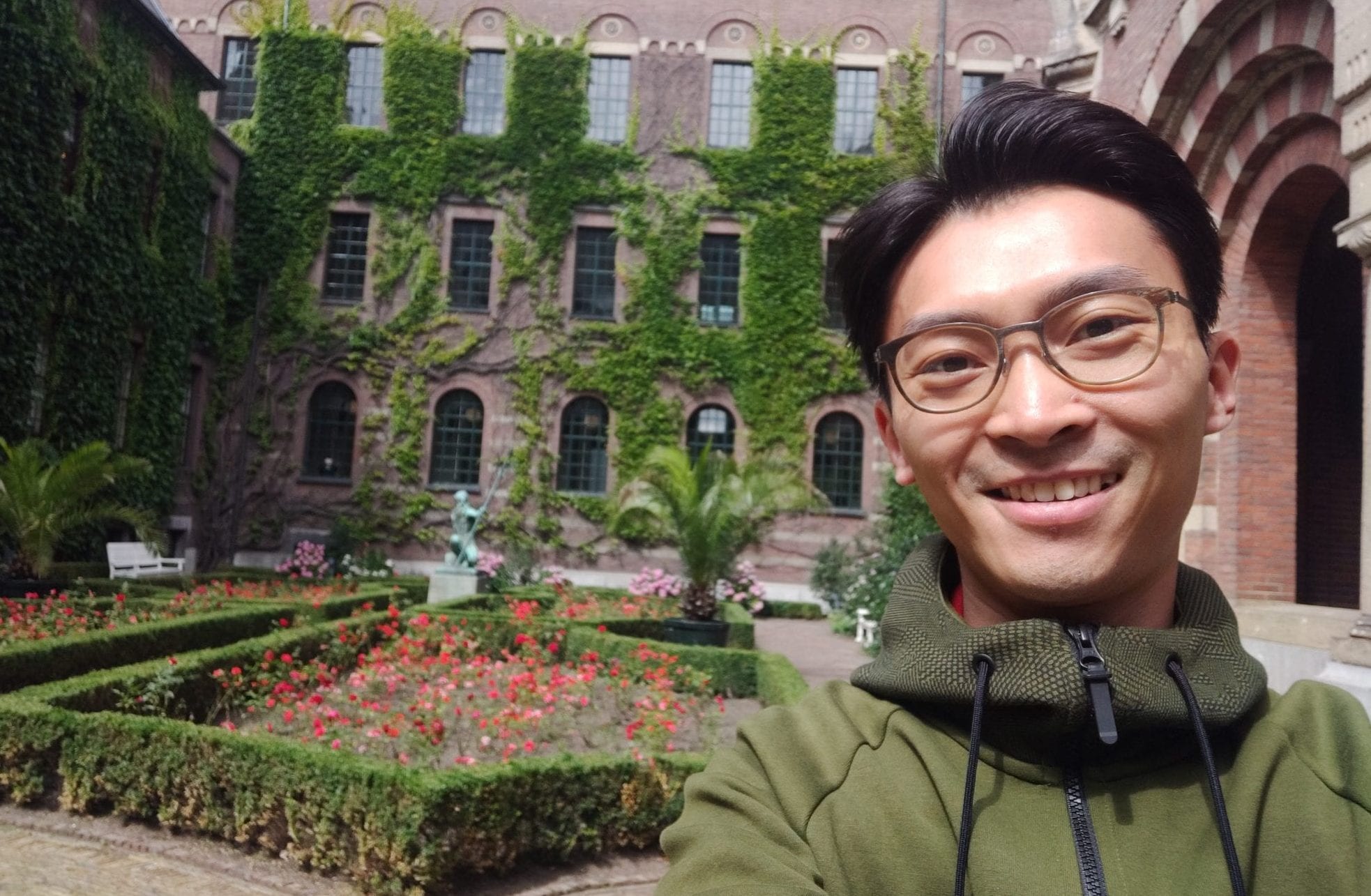 Similar to Sergio, he considers speaking Dutch a necessity in order to integrate better. “When I told my neighbours and my study advisor that I am learning Dutch, they became more friendly.” When he bumps into them occasionally, they ask him how his Dutch is coming along. The other day, he went to the student service centre to inquire about something, and when he mentioned he is learning Dutch, they seemed to like the idea. “When they see a foreigner trying to speak simple words in Dutch, they become more welcoming, because I don’t think this city is too welcoming to foreigners. But if you integrate by speaking Dutch, they become more positive.”

His favourite word in Dutch, like Sergio’s, is also lekker. It was the only word Calvin knew before he started the course. He struggles with Dutch pronunciation because it is very different from English. “Because most of us in this course already have a high proficiency in English, we often compare the languages we know with Dutch. I am using English to learn Dutch”, he says.

“They want to integrate, but their language is still so basic”

Riina Leppänen has been a Dutch teacher at the Language Centre for two years. She started off as a Dutch student 23 years ago and now works as a translator and teacher. “I like the social side of teaching and the group dynamics. I also feel that, because I learned Dutch at an adult age myself, it is somehow easier to explain the procedure that students go through when learning”, she says.

During the summer course that she currently teaches, her 15 international students start at zero and reach level A2 in three weeks. “It is quite intensive to reach this level in three weeks. It is a lot of vocabulary and a lot of grammar. You can see it now that we are halfway through the course. It is quite overwhelming for the students”, Leppänen explains. “The good part about learning Dutch in Holland is that you are immersed in the language. They are learning it in their environment. Anything you learn in class, you can just put into practice outside of class.” 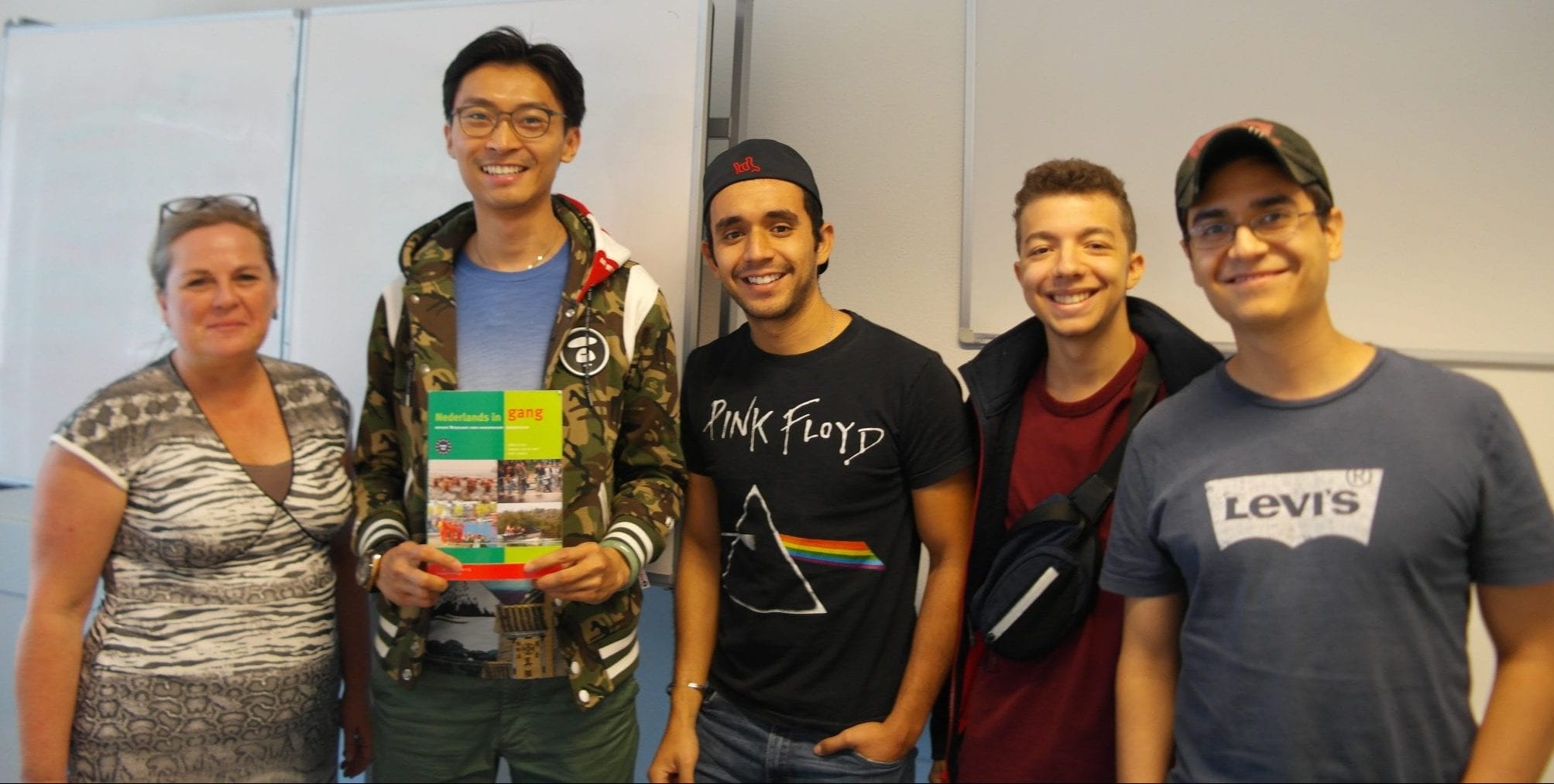 She sees students struggling to get into a conversation with Dutch people because they live in an international community where English is their lingua franca. “Students have a hard time finding people who would take the time and effort to speak Dutch to them.” Leppänen recalls her own experience when she moved to The Netherlands: “In the beginning, you know so little. You start from zero, and you learn very simple sentences. You actually want to say so much more but you can’t because you don’t know the words and constructions. So you feel very vulnerable. You want to make contact and show who you are, but actually you can’t show who you are.”

Having been in this position herself, she understands the frustration that students face when learning Dutch. “All the students are intelligent. They have a lot to say. They want to integrate, but their language is still so basic, so you have to get over that. That is the biggest struggle.” When Dutch people actually switch to English, they make it more difficult for the language learner to improve their Dutch. Leppänen encourages learners to ask Dutch people to speak Dutch to them while they respond in English. Both sides could benefit from this bilingual way of conversing since it doesn’t force Dutchies to speak English and gives internationals an opportunity to improve their Dutch.

Loudini Mohamed Nabih (17) from Canada is about to start studying medicine, an academic programme which requires him to speak Dutch at C1 level after his second year. That is why he wanted to learn Dutch as soon as possible. “I didn’t begin with medicine studies yet, so my brain is fresh which allows me to process a new language.” Having just left high school also puts Nabih in an advantageous position since he is used to learning different languages. “I have that work method”, he says with a grin. 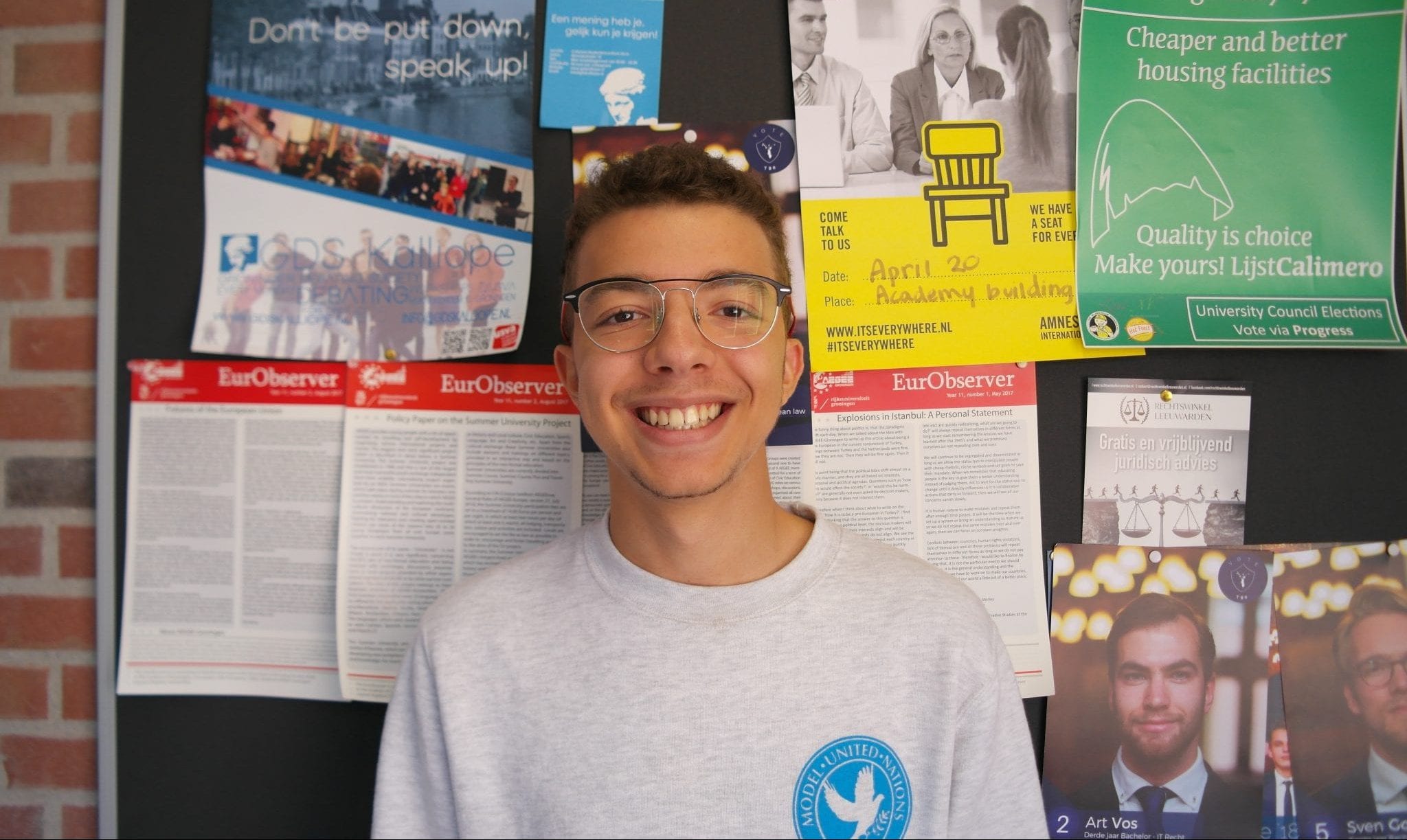 When his Dutch friends speak Dutch, Loudini often struggles to follow their conversation, but he hopes to be able to join in soon. When he visited his sister in Groningen, he never had a problem communicating with Dutch people because they all speak English. However, he experienced Dutch people pulling a face when they discovered he didn’t speak Dutch. “They don’t like it when people speak English. If you’re a stranger and they see that you’re learning Dutch and you try to talk to them, they are more kind to you. So learning Dutch can indeed help with integration”, he says.

Plenty of opportunities to improve your Dutch

There are plenty of opportunities to improve your Dutch in the city of Groningen. In addition to courses at the Language Centre, you can also join the initiative My Local Friend organised by City Central, which pairs up Groningers with internationals to help you become more fluent in Dutch.  Join the Cafe de las Lenguas community in Groningen for their weekly meetings or immerse yourself in a local sports team that operates in Dutch. The next time you go to your favourite café, order in Dutch and see how that already breaks down the walls. Don’t forget: the first step is always the hardest, but you will get there.