KEI Week attracts 5,042 students and this is what newcomers love most about Groningen - The Northern Times

KEI Week attracts 5,042 students and this is what newcomers love most about Groningen

As the academic year is about to start, Groningen welcomes thousands of new students from all over the world. Join Melanie Lange of The Northern Times on her quest to find out what makes Groningen so attractive as a student city. 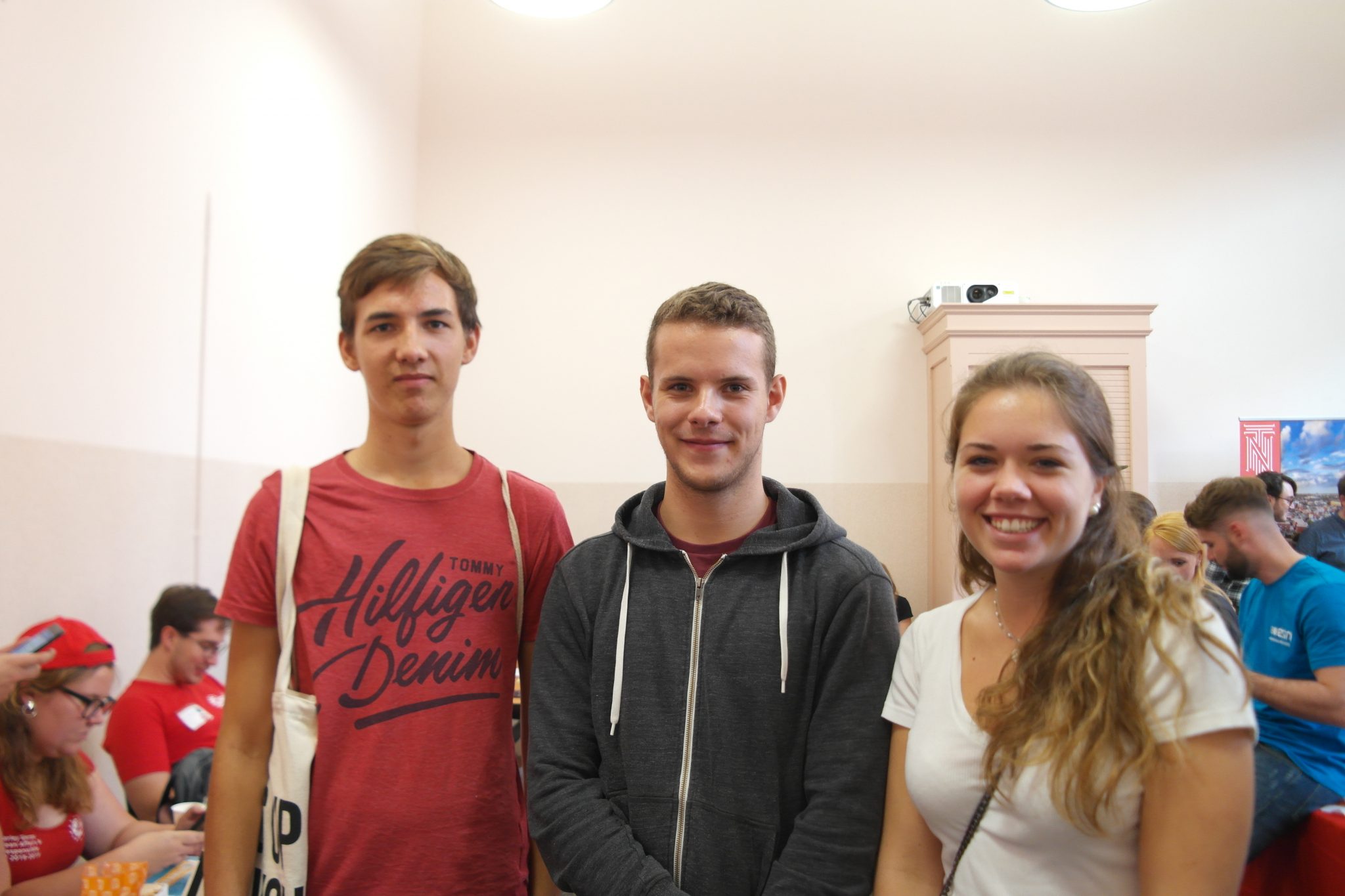 “I like the Netherlands a lot, it is very international. I like it that you hear Dutch but you also hear English and different languages. It’s pretty hectic”, says Myriam (19) from Spain. Philip (19) from Germany instantly remarks on Groningen’s welcoming atmosphere and the fact that you can easily talk to everyone in English. Have you ever wondered why so many students decide to study in the North of the Netherlands instead of Amsterdam or Utrecht? Then read along and find out! Myriam, Philip, and Boyd were among the thousands of students who saw the KEI-week as an opportunity to make new friends and to learn more about their new home.

Monday was a busy day at the Vismarkt; it was filled with 140 different stalls, of which 53 were represented by student associations. They all promoted their initiatives ranging from Bragi (student choir), Flanor (literary student association), AEGEE-Groningen (European student travel association of Groningen) to the University’s green office, City Central, or local businesses such as Ikea, Domino Pizza or Train More. 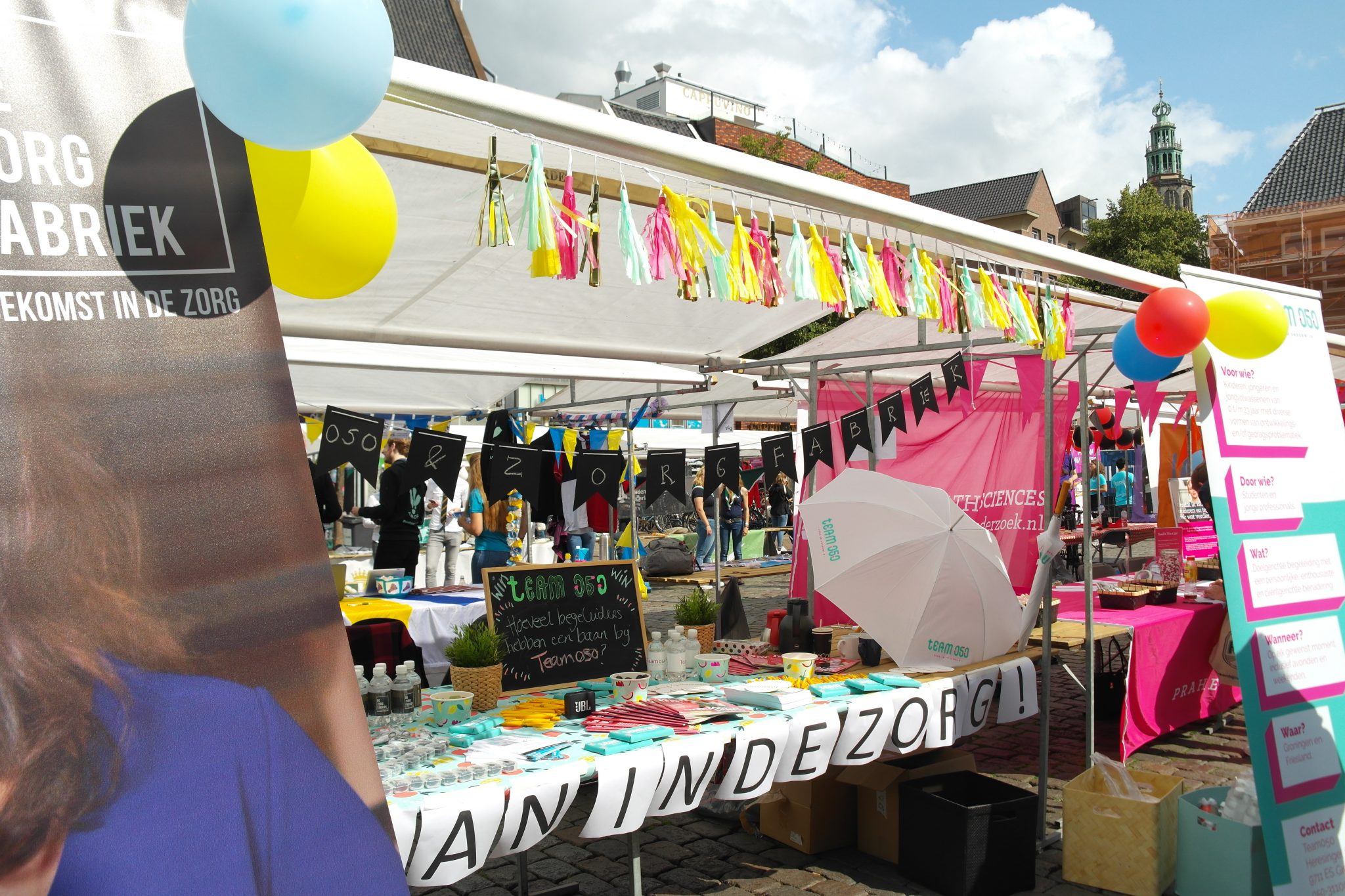 The organisers of the KEI Week made it their mission to create a welcoming, bustling, fun, and ‘gezellig’ atmosphere to welcome students to Groningen and tell them all about the ins and outs of Groningen. Last year 5360 first year students, this includes bachelor and master students, registered for the KEI Week of which 750 were internationals. This year the KEI Week attracted 5,042 students, which is less than the previous year. This is, however, not a surprise to Remmie Palland, one of the seven board members of the KEI Week. “We reached a new record of registered students last year and we already expected less students this year”, she says. 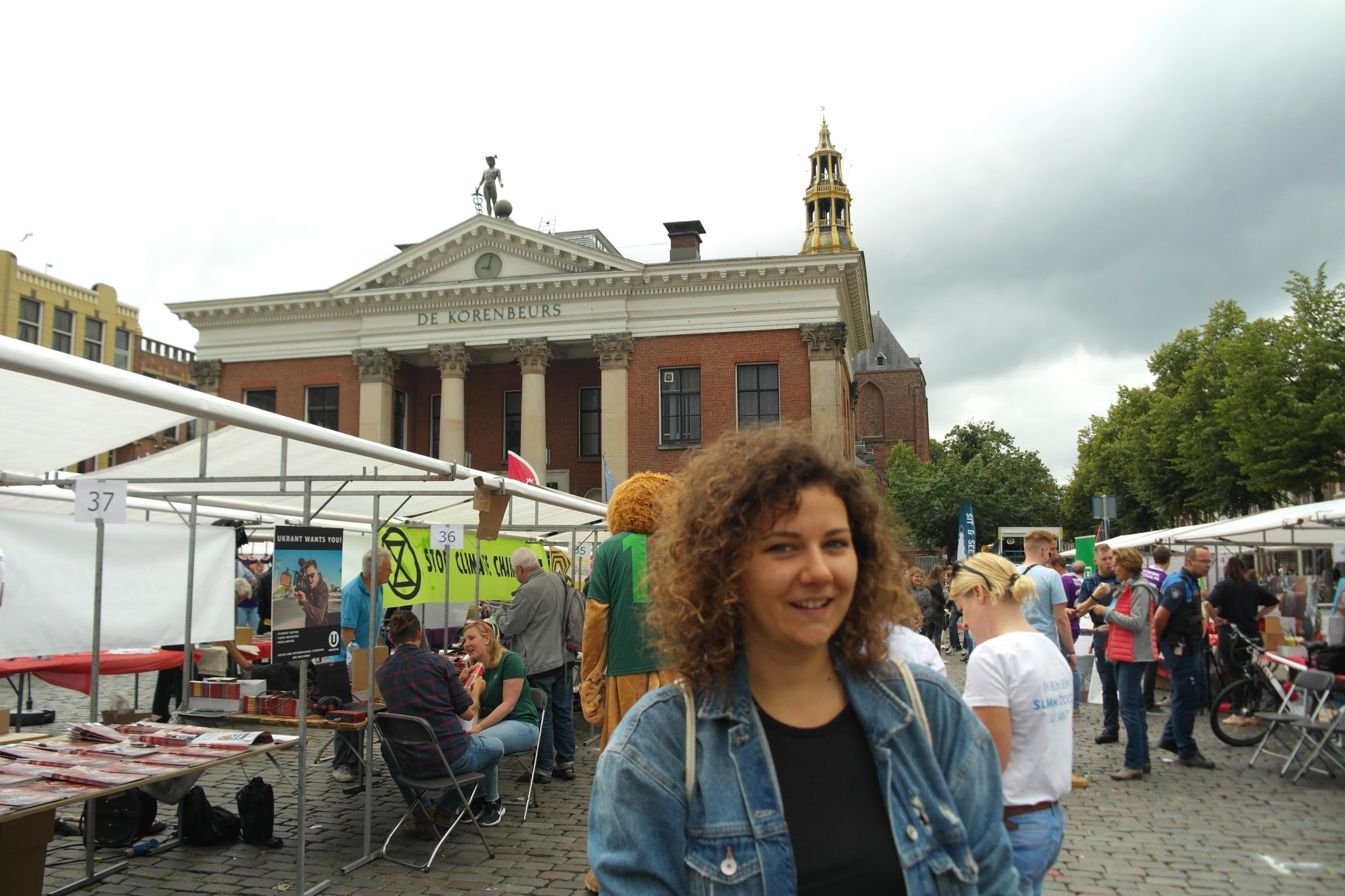 Anne (26) is one of many Dutch students who visited the KEI Week. She is from a small town near Eindhoven and starts her master’s in Governance and Law. She chose to study at the RUG because it is the only University in the Netherlands that offers this specific master. “Groningen is a beautiful city, there is lots to do here, but it is not as crowded as Amsterdam or Utrecht”, Anne says. She loves the “feel of the city” and the fact that there are plenty of parks in Groningen which combines city and nature and makes Groningen a great place to live. Since she is fairly new to Groningen, she signed up to the KEI Week to meet new people and get a feel for the city. Being a vegan herself, Anne is pleasantly surprised by the huge choice of vegan food that Groningen has to offer. 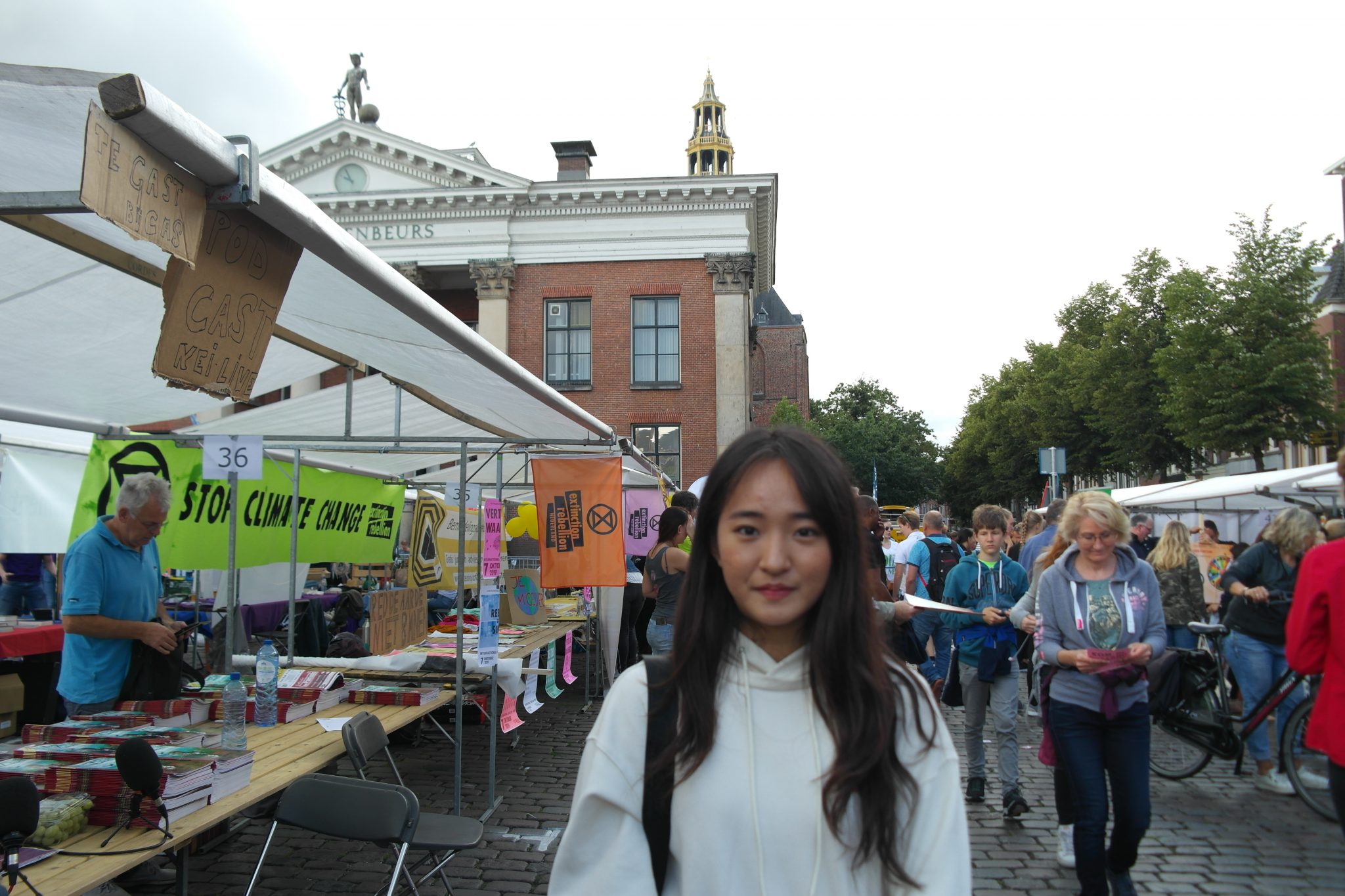 It didn’t take too long till I stumbled across some international students. You Been (19), called Curie, arrived four days ago. The Korean describes her first impression of Groningen as cold. “I can’t believe it is summer over here, especially since I arrived from Thailand where I finished my High School”. According to Curie, Groningen looks like a movie scene: “You can’t see these type of buildings where I am from, where everything is big, and different types of buildings and roofs mingle.” Curie is going to start her bachelor’s degree in Pharmacy at the University of Groningen. She chose the Netherlands over the UK and other European countries because “it is very international, it offers a good-enough price and excellent education”. Her weirdest experience in Groningen so far was French fries with Mayonnaise. “Because I am on my own now, I thought it would be good to get to know people during the KEI Week and I heard that this is the biggest introduction week with lots of international students”. The first-aid stall sparked her interest: “I think I will sign up for a first-aid course because I missed the opportunity at my High School so I want to try it out here!” 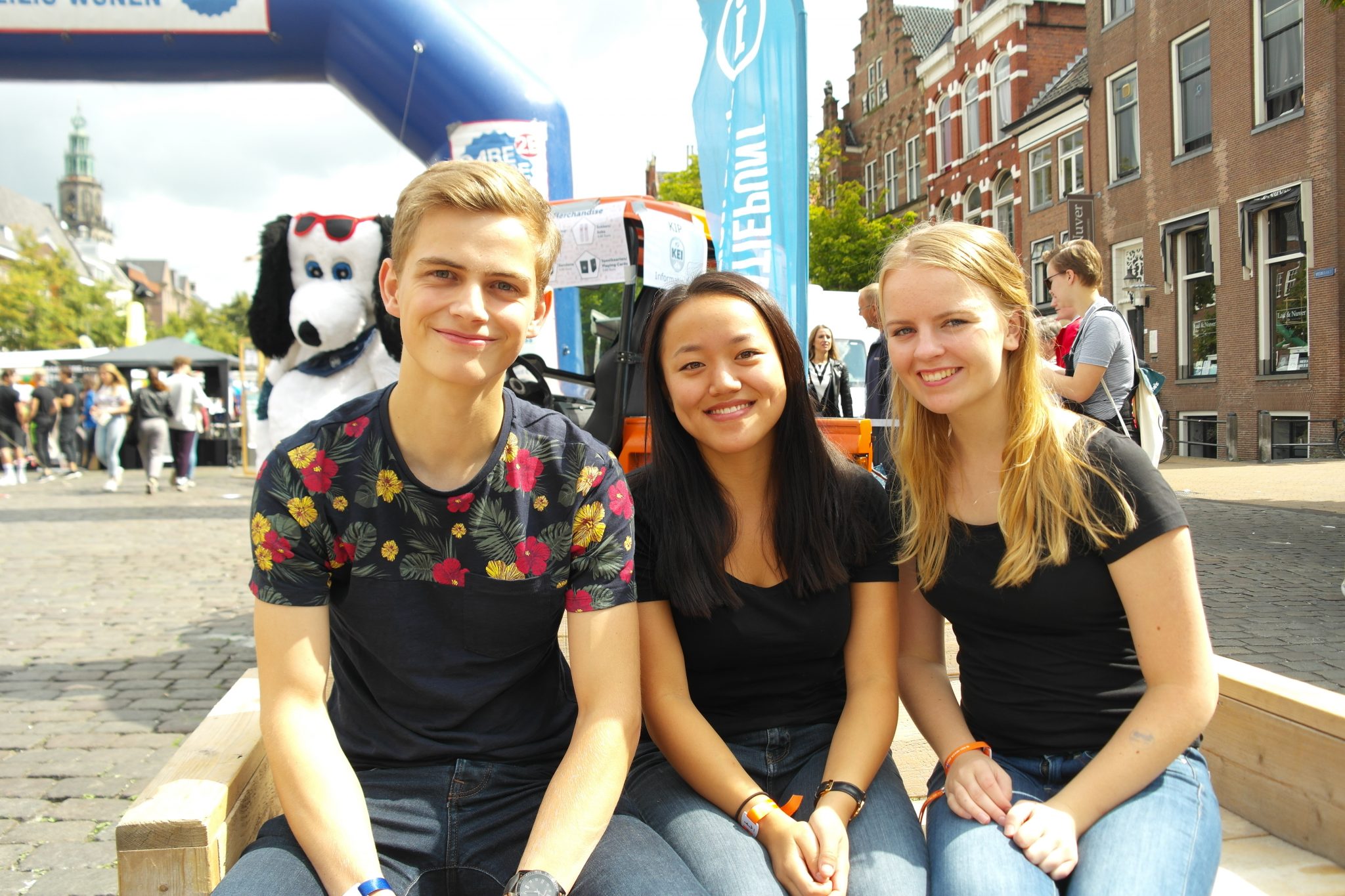 ‘Not far from home’

Sander (19), Jay (17), and Christina (17) are enjoying themselves at the sitting area provided in the middle of the Vismarkt surrounded by good music, drinks, and hundreds of excited students. The three of them know each other from High School and decided to explore the fair together. They all come from a small town about 30 minutes away from Groningen and decided to study in Groningen because it is not too far from their home. Christina chose to study International Business at the Hanze because “I actually didn’t know what I wanted to study and I wanted to travel the world, and this was optional with this study”, she says. All of them visited Groningen many times and enjoyed the vibrant student culture while looking up to the university students in Groningen. “If students were walking around I was always like wow they’re big, and now I am one of them, that’s a bit strange.” 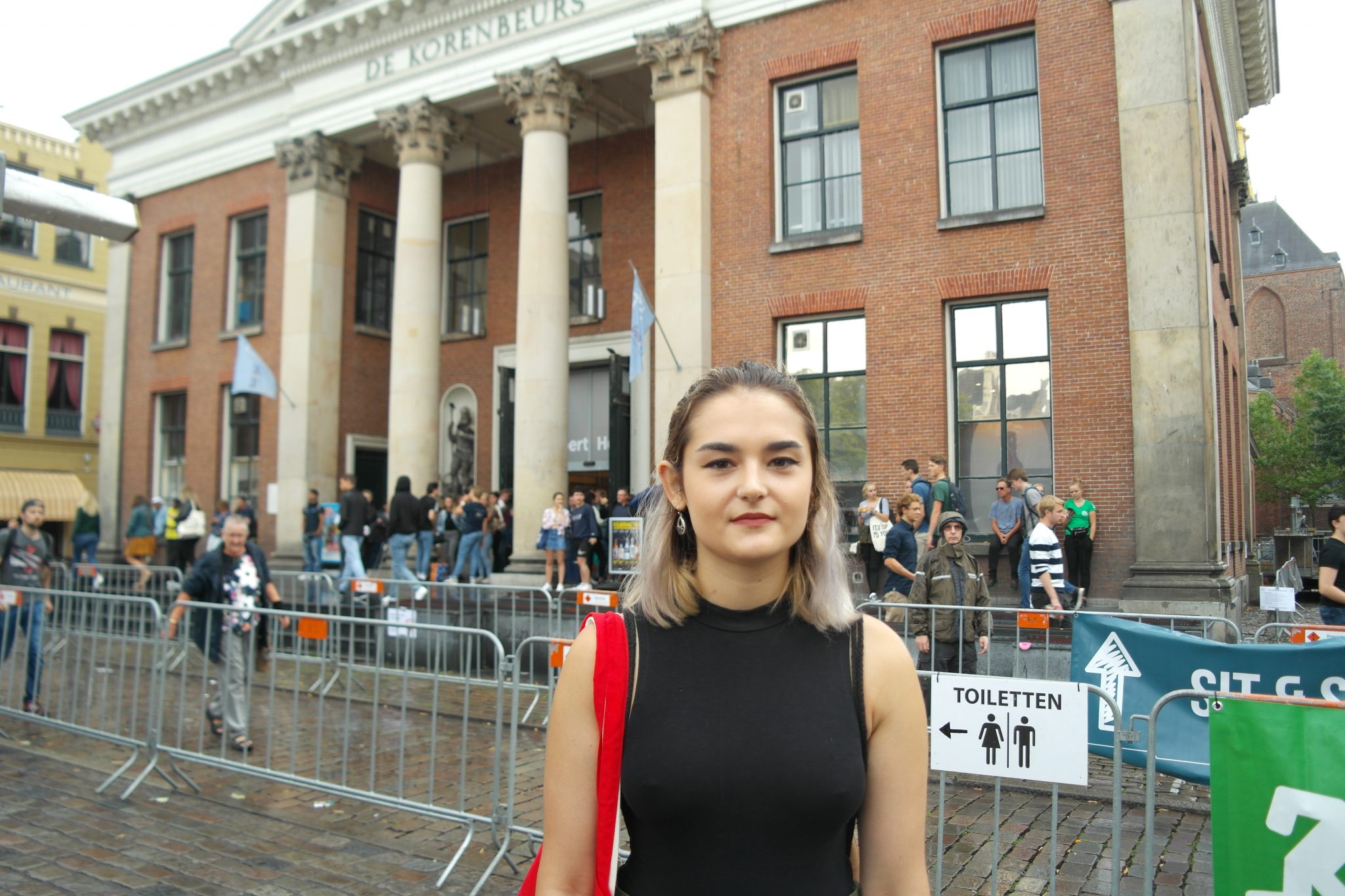 ‘Groningen is twice as cheap as Dublin’

For Ines (19) from Dublin, who is going to study International Business at the Hanze, this is a dream come true. “Ever since I was really young I wanted to move abroad to study but I never thought it was really possible because it always looked really expensive.” After looking at different countries, she was shocked to find out how affordable studying and living can be here, compared to Dublin. While she wouldn’t have had to pay for housing in Dublin, which is around 9000 euro a year for students at the University College, she would have had to pay between 4000-5000 euros tuition fees a year, which is twice as much as she is paying in Groningen. Ines preferred the degree programme at the Hanze University over the one in Utrecht. “Even though I liked the cities evenly something pulled me more over here, I just really love Groningen!” Ines first visited Groningen in December and instantly fell in love with the international atmosphere. “I only hung out with two Dutch people and the rest were German or American.” She encourages every desperate soul who is still looking for a room to keep checking Facebook and all the housing apps daily because “you will find something eventually!” 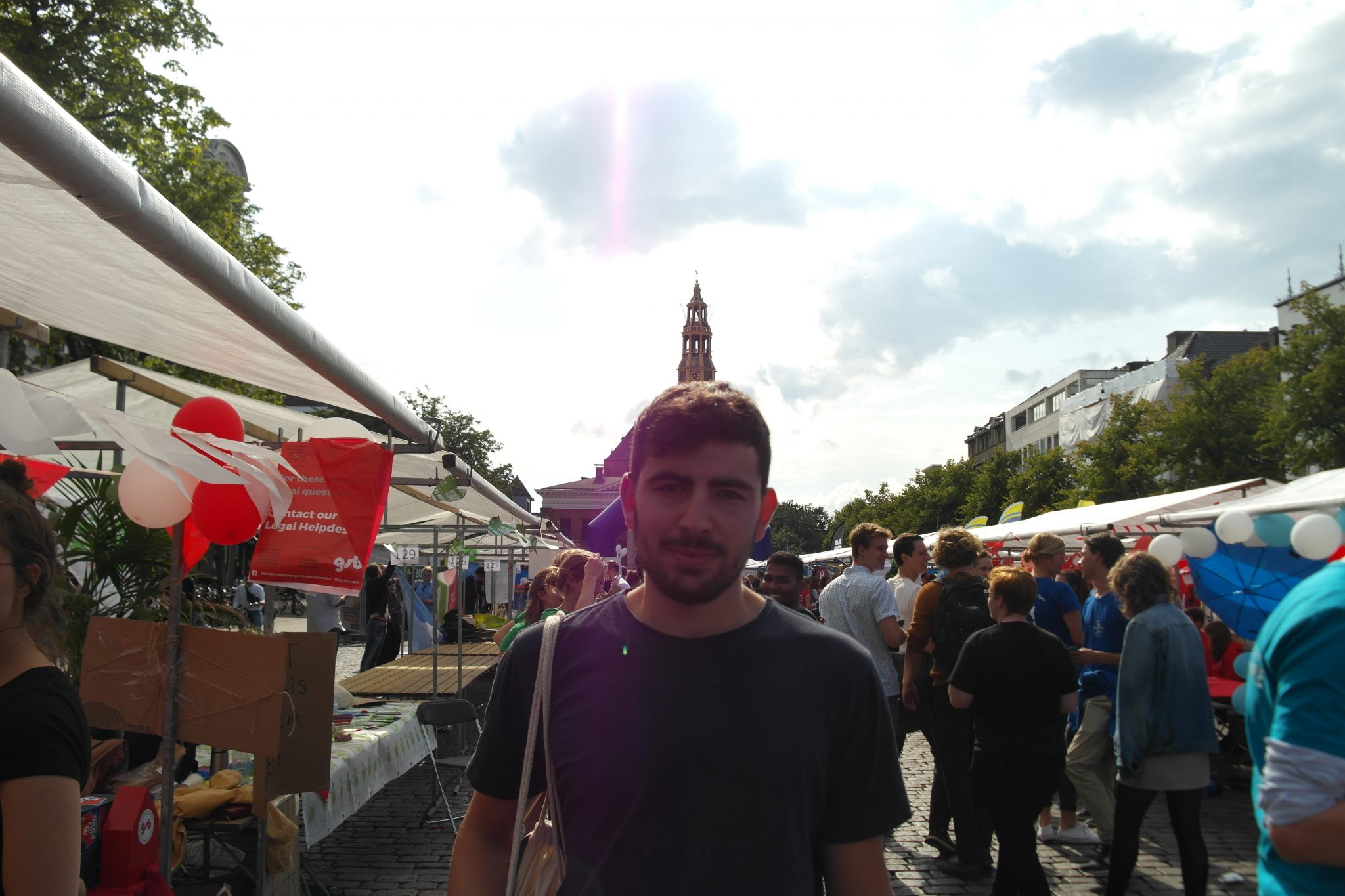 ‘Groningen has the better vibe’

Davide (21) from Italy isn’t new to the Netherlands. He has been living in Zwolle for the past two years and didn’t plan on studying at first. “Groningen is a big student city. I was looking for a place to study International Communication in English so my option was either Groningen or Arnhem but I thought Groningen has a better vibe around it and it is well-known for being a fun place”. Hanze University convinced him because of its modern and practical approach regarding social networks and study-related topics. “Especially during the KEI Week the atmosphere here in Groningen is lovely, it’s great to see so many young people around.” His three words to describe Groningen would be busy, definitely busier than Zwolle, young, and modern.

After spending my day strolling around the Vismarkt, soaking in the fun, vibrant, and welcoming atmosphere, and speaking to loads of Dutch and foreign students, I came to the conclusion that Groningen is indeed a paradise for students. The Rijksuniversiteit and Hanze University both offer an excellent education, especially commented upon by international students. The University of Groningen currently holds place 66 on the Academic Ranking of World Universities published by the ShanghaiRanking Consultancy. Find out more about the University’s international rankings here https://www.rug.nl/about-us/where-do-we-stand/rankings?lang=en. If that hasn’t convinced you yet, Groningen charms students with its global, vibrant, welcoming, young, and green atmosphere that promises them a great time during their studies.

Cycle highway between Groningen and Leek could be extended to Drachten, Leeuwarden

Editorial: International students can change the outcome of the municipality election!

Setting goals, clear intentions, and the ‘why’: getting into the right headspace for work during the pandemic