Kate Raworth to Groningen: “Keep being activists” - The Northern Times

by Traci White
in Economics
0
Share on TwitterShare on FacebookWhatsapp

In a sold-out grand theatre in Assen, British economist Kate Raworth addressed an attentive crowd about how humanity can strike the balance between social and environmental needs, including in the earthquake-prone region.

Raworth was invited by the Party for the Animals to address the Dutch parliament about the inadequacy of the current economy, and travelled directly from The Hague to De Nieuwe Kolk in Assen to speak to 850 people, many of whom were local business owners, from across the north.

Nick Stevens, the Chief Digital Officer of Groningen, hosted the event, and the first half of the programme was a presentation by Kees Klomp, managing director of Dutch think tank Instituut SMO and co-author of “Pioneers of the New Prosperity”. After describing several economic theories similar to Raworth’s doughnut model, Klomp highlighted Dutch companies that are good examples of balancing social benefit and environmental impact, such as Tony’s Chocolonely, De Vegetarische Slager, De Prael and Dopper.

After the break, Raworth arrived on the stage and gave a brief but thorough explanation of what exactly doughnut economics is. In her book of the same title, Raworth calls for the long-term goals for humanity to become the basis for an economic model rather than endless growth. 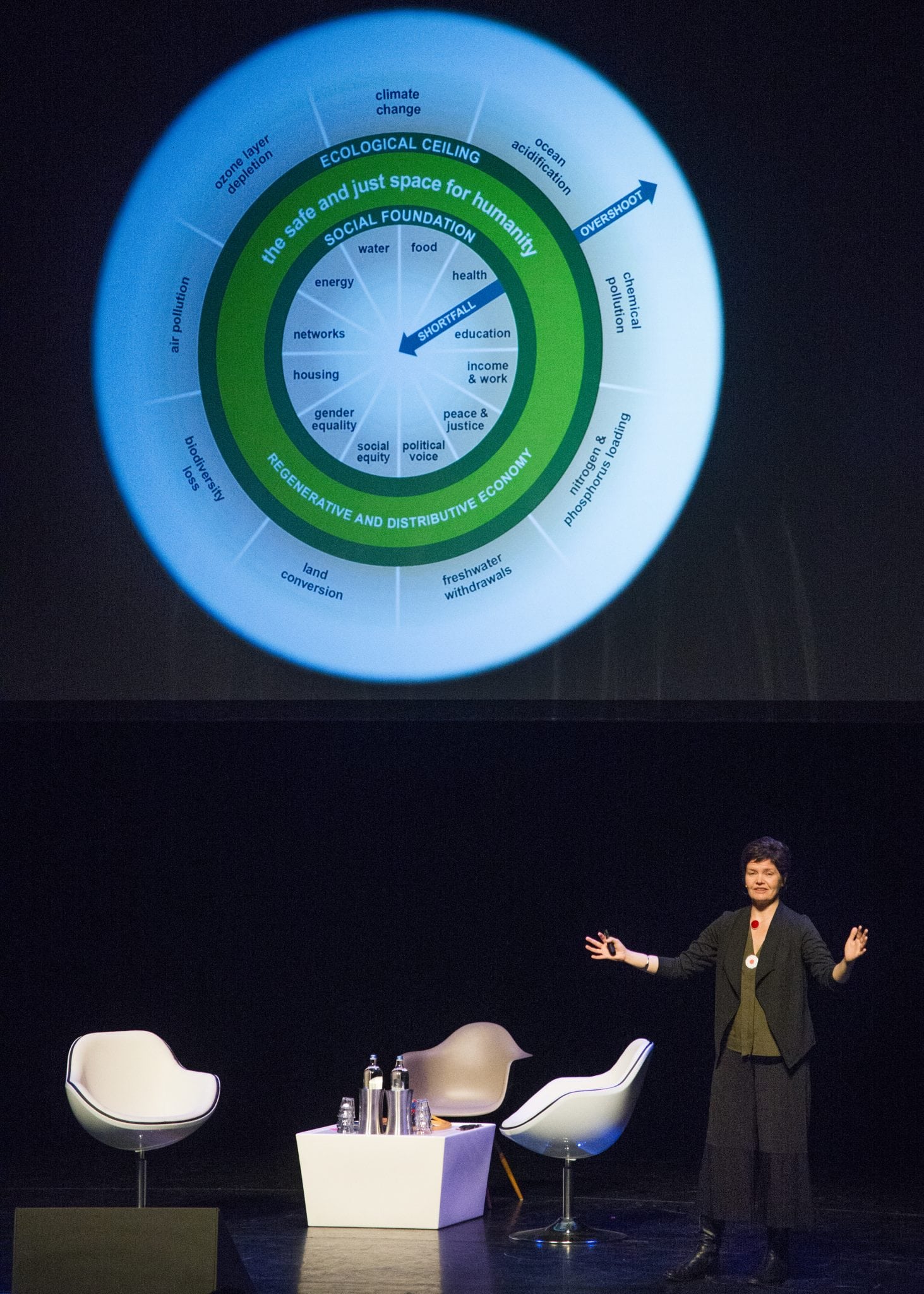 The outermost ring is the environmental factors that are impacted by extractive economic practices. Raworth’s model argues that the existing economic model, which is focused purely on prosperity, has come at the expense of environmental health. The doughnut model posits that there is a safe, balanced zone for humanity in between the social foundation (inner circle) and the environmental ceiling (outer circle). Society needs to move away from extractive practices that ask “how much financial value can we extract in how we design this?” and more toward to a generative model that asks “how many benefits can we layer into how we design this?”

As they sat down to take audience questions, Stevens said that Raworth’s message seemed hopeful. But Raworth said that it actually makes her angry that economics education has barely changed over the decades. “It just makes me very angry in my belly when I sit in on economics lectures. I was a student nearly 30 years ago, and the first lesson was, here is supply and demand. The diagrams don’t mention the living world.” Any ecological impact that comes from economic activity is still described as “environmental externality”, which Raworth finds deeply alarming.

The evening moved on to four well-produced video segments featuring questions from people from across the north, each representing different aspects of the local economies. Margryt Fennema, a student at NHL Stenden in Leeuwarden, asked Raworth about how to tear down barriers between knowledge institutions and the business environment. After Fennema joined them on stage, Raworth’s advice was to find open doors instead: identify companies that are already warm to the idea of collaboration and then set an example that people can follow.

Anneloes Oldenberg, a manager at Virol, a waste management company, wanted to know how the government, educators and businesses can better facilitate work placement and training programmes. In Raworth’s view, the general population should be open to learning new skills, and governments should enable training without losing benefits. The biggest way to achieve both of those would be to consider providing a basic level of income to enable more risk taking.

The question that got the most energetic response from the crowd was posed by Gert de Vries, a resident of the small town of Overschild in the induced earthquake region of Groningen. De Vries asked Raworth what the residents should do: should the people wait for the political process to solve the problem, or find a way to make sure financial resources go directly toward bringing the residents into the safe zone of the doughnut model.

Raworth seemed stunned to hear that 80 percent of the homes in the village of 250 people were deemed cheaper to tear down than repair, and argued that it would ultimately be more expensive in terms of the environmental costs. “You want to minimise material use and carbon emissions by refurbishing and renovating, not flattening them. So that adds to the material and energy footprint.”

“Civic actions inspire each other”

Raworth said that De Vries’ description of the gas company’s approach was a textbook example of the exploitative approach of the past. “How much gas can we extract, and how much financial value can we extract? I really think that this approach needs to be left behind in the 20thcentury.” The economist called for people not to simply assume that the government or new technologies will solve the problems, but to remain activists: “civic actions inspire each other. Keep at it.”

The final question of the night came from Rene Donkerbroek from the provincial government in Drenthe, who asked what the role of the authorities should be in the doughnut. Ingrid Zeggers of Circulair Friesland joined Raworth and Stevens on stage to be on the receiving end of Raworth’s rant against privatisation and market take overs, but Raworth moved on to say that she thinks governments are entering a new phase: “The state now sees itself as a partner to enable the commons as much as the market” she says.

During a standing ovation, Raworth had to rush off the stage to catch a train to the next stop on her tour of the Netherlands. Meanwhile, on the trains heading back into Friesland and Groningen, attendees of the lecture were having their own conversations with each other, many of whom seemed to be left with more questions about how to apply the doughnut than answers.

Raworth’s visit to Assen was organised by a group of northern entrepreneurs, and was made possible by contributions from the three northern provinces.

Gasunie promises ‘no gas shortage this winter’, but caveats apply

Work absences at record high in the Netherlands