International student housing: is it time to fight the law?

by Traci White
in International students
0

Beyond the ring road on the outskirts of town, the used containers plagued with spotty internet, unreliable water pressure and heating are piled on top of each other. The furnished units may seem a bit overpriced given their utilitarian condition, but for international students, they are better than having no place to live at all.

Sound familiar? I’m not talking about 249 shipping boxes that opened their doors to foreign students at the Suikerterrein in recent weeks: I’m describing the student housing at Zernike that greeted me when I arrived in Groningen as an exchange student in 2005.

That was 13 years ago, and despite applying ahead of the deadlines, the five container buildings (see above, middle of frame) were the only option left by the time I found out I had been accepted for a semester abroad.

Back then, the number of foreign students was far lower. In 2004, there were barely more than 500 internationals, mainly exchange students, altogether at the University of Groningen – there are ten times more than that now, most of whom are here for the entirety of their degree programme. The Hanze University of Applied Sciences and NHL Stenden have also seen a boom in their foreign student numbers over the past decade.

But in the city of Groningen in particular, the amount of available housing has not substantially increased: even my former home at Zernike is no longer an option. My containers, nestled between the crematorium and the Zernikelaan, were torn down a few years after I moved out. The ground where they once stood is now a car park.

The newly opened emergency student housing at the Suikerterrein and ambitious plans to build new units at Zernike are short and long term attempts to fix the housing crisis in the city. Speaking from personal experience as a former exchange student who lived at Zernike, it feels more than a little bit like history repeating itself. Seeing how international student housing seems to have been treated as an afterthought year after year for more than a decade led me to wonder: what steps can be taken to actually fix this issue once and for all?

The housing situation in Groningen is a perfect storm created in large part by Dutch law. There are three laws that Dutch universities have to observe that seem fundamentally opposed to their efforts to recruit foreign students.

The most impactful law has to do with housing: in the 1980s, Dutch higher education law explicitly stated that providing lodging for students was not the responsibility of the universities. Their sole tasks are to provide students with an education and to conduct research.

Another law mandates a national university application deadline date: 1 May. The only exceptions are for academic programmes with numerus fixus caps – the deadline for these competitive programmes is the 15th of January. May might seem far ahead of courses starting in September, but EU students do not have to finalise their enrolment until either 31 August or 1 September, which means that the universities do not actually know exactly how many students will ultimately be showing up in their classrooms until courses start. Universities typically only provide their definitive enrolment numbers in October, which makes allocating student housing and assigning staff something akin to gazing into a crystal ball.

The law that has gotten the most attention during recent housing protests in Groningen is the university financing model. Dutch universities receive government funding on the basis of the number of students enrolled in their bachelor and master programmes (who are on track to graduate on time), and the number of diplomas they award. The current model means that universities have to make sure that their student numbers do not shrink, lest a portion of their government financing disappear.

That particular issue is part of the reason why foreign students are being recruited so deliberately. The Dutch birth rate started plateauing and then declining around 2002, which means that in 2020, there will be fewer 18-year-old Dutch people to enrol at the universities. That inexorable decline has been kicked down the road a bit and is now predicted to begin in 2022, thanks in part to the Dutch government giving first year students in the 2018/2019 academic year a 50 percent discount on their tuition fees.

Could revisiting any – or all – of these laws potentially help fix the housing problems for foreign students? Since the laws that make the housing situation so tricky in Groningen are developed on the national level, over the past month, the Northern Times reached out to the ministry of education and members of the Dutch parliament responsible for higher education policy to hear about what they think could finally break through the gridlock. Harry van der Molen (CDA) and Frank Futselaar from the Socialist Party, both of whom are originally from the north, responded to our inquiries about the role of admissions dates in student housing.

“You cannot discriminate against someone when it comes to providing housing”

Problems in the housing market are compounded by a whole other set of laws and an apparent willingness to accept discriminatory acts of preventing internationals applying for certain rooms. Van Der Molen says that the Dutch parliament plans to address the practice of declaring rooms off limits to internationals in the coming months. “The mere fact that someone is an international student cannot be the only reason not to have them”, he says. “You cannot discriminate against someone when it comes to providing housing.”

Frank Futselaar, an MP for the Socialist Party from Groningen, says that the difficult position that international students are in is due to aggressive recruitment efforts “without sufficient regard for the negative consequences of that policy.”

“The housing problems in a number of cities are primarily due to a lack of rooms,” he says. “This issue is even worse for international students because they don’t have a network, often know very little about the housing laws in the Netherlands and don’t have the option to continue living at home like many Dutch students do.” Futselaar says that changing the deadlines would be unlikely to solve the issues and says that the problem lies in the way that the current financial model incentivises universities to actively draw in more students.

Van Der Molen (CDA), who is from Friesland, says that he sees some potential in changing the application date. “If the period between applying and classes starting is longer, then in theory, foreign students would have more time to search for a place to stay and cities could respond to that. But a possible issue is that students sign up for multiple universities”, which could mean that multiple cities are accounting for the same student to show up.

That is one of the main drawbacks that RUG spokesperson Jorien Bakker points out about potential systematic changes: “These things can only be changed on the national level. No matter how early you make the deadlines, international students in particular apply to a lot of different universities and often only decide much later which one they want to attend.” Bakker also points out that having separate deadline for EU and non-EU students could amount to an unfair advantage for foreign applicants.

If changing the application deadlines may not fundamentally change the system, Van Der Molen still agrees that the current financing allocation model needs to be revisited. “I think in the long run that the system of focusing on the number of students and diplomas will have to come to an end,  it’s not a good thing that universities are incentivised to recruit as many students as possible.”

Since arriving in September, Burak Başaran, an exchange student from Turkey at the Faculty of Economics and Business, has lived in the tents at the Zernike campus, couch surfed through the DAG database for two weeks and lived at the former school at the Metaallaan. By the 17th of October, he had finally found a place to stay and will be moving in later this month. He says that having more time to look thanks to an earlier deadline would be good, but it would not fix the underlying issues, namely the university financing model.

While housing corporations rent out rooms to foreign and Dutch tenants alike, they are not dedicated to providing international student housing in particular, nor are they especially well-suited to the needs of foreign students. Another non-EU student – Elena Ljusheva from Macedonia, also enrolled at FEB – says that she found a room through international housing provider SSH in July, but the timing was still stressful: her visa came through the day before her flight to the Netherlands.

The turnaround time between applying for admission, being accepted, filing the paperwork to get a visa and finding housing is pretty unforgiving for students and university support staff alike. The Immigration Service Desk at the University of Groningen is so busy from June through September that emails have an automated response, informing students that they are completely unavailable by phone and that it can take up to ten days to respond to emails.

At NHL Stenden, director of marketing and communication Rob Koning acknowledges that staff are faced with a heavy load during the summer months. “It’s undeniably higher just before the summer vacation at our Central Student Administration office, and that usually lasts a couple of weeks. It’s still plenty of time. If the deadline was a little bit earlier, it would help a little bit, but on the other hand, you have to balance it out with not making the deadline too early so that you have enough time to recruit students”, Koning says.

The deadline timing does not present as much of a challenge for housing for NHL Stenden students, either. The university of applied sciences has branches in Leeuwarden, Emmen and Meppel, but the housing markets in the Frisian and Drenthe cities are far less overheated than in Groningen. While Jolien Stokroos, SSH’s Groningen branch manager, says that earlier admissions deadlines would make their job at least a little easier in Groningen, NHL Stenden works with short stay housing provider StudentStay and guarantees non-EU first year students a room. “It’s easiest to sort out housing in Leeuwarden, and it’s a bit harder in Meppel and Emmen, but we always manage to work something out,” Koning says.

At the Hanze University of Applied Sciences, student affairs manager Nynke Beintema says that the school has at least a rough indication by early July of how many non-EU students are coming. That is the deadline for submitting a student visa request. Another possibility in the future could be to incentivise students to pay their tuition fees sooner – Harry van der Molen says that is a distinct possibility under the new minister of education – or by letting them have earlier or preferential access to a study suitability check or a campus tour.

There are still some ways to work within the limitations of the current laws, though. At the Hanze, non-EU students are given priority when it comes to searching for housing, and registration for SSH rooms starts one week earlier for Hanze students than RUG students. Stokroos says that it is up to each academic institution if they want to make extra concessions for non-EU students.

No matter what laws they say should or should not change, or if they will make a difference at all, university students and staff and housing providers agree on one thing: Groningen simply has to have more available housing. “The bottom line is that there’s just not enough rooms in the city”, Beintema says. 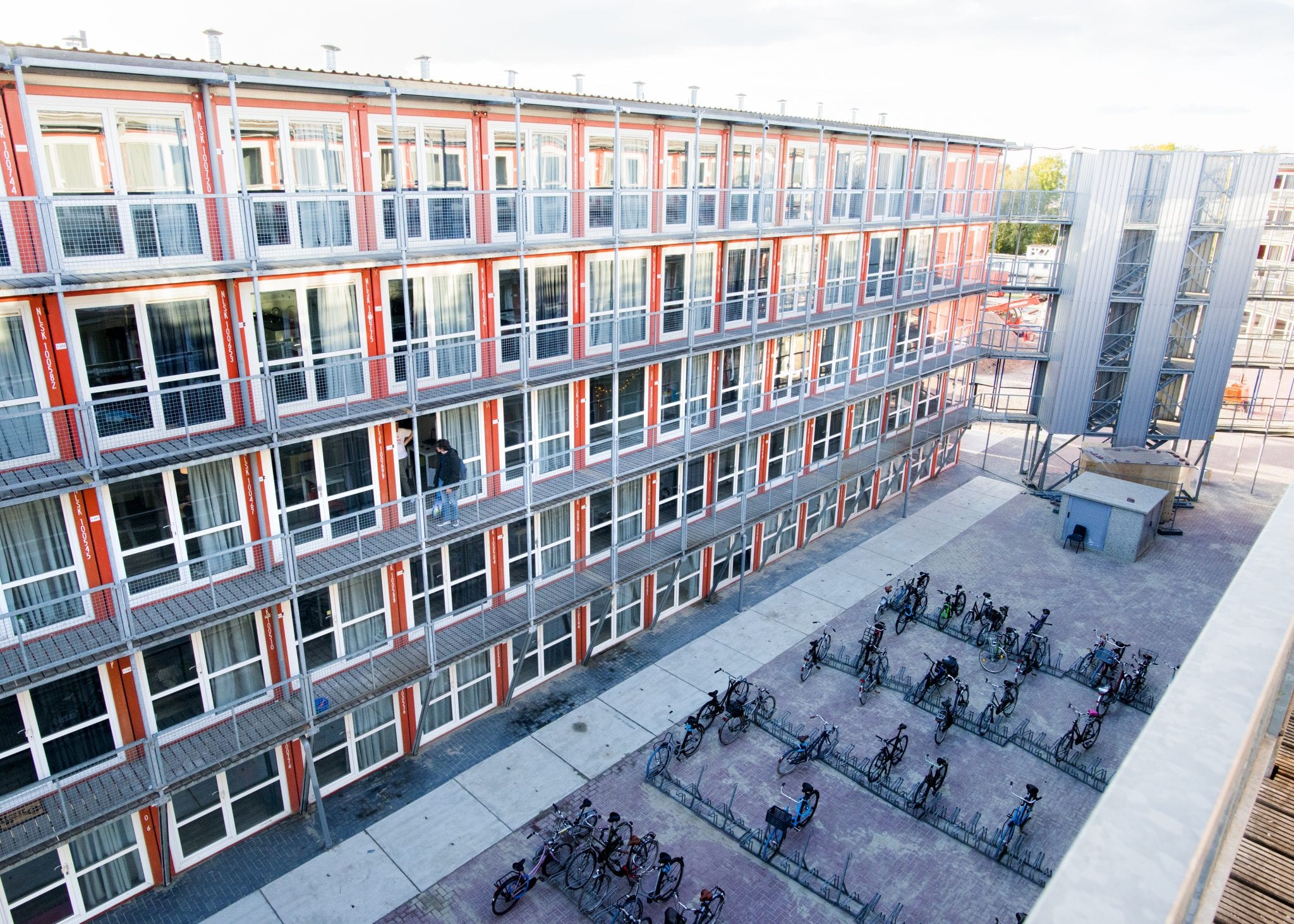 Correction: An earlier version of this article referred to the ISD at the University of Groningen as the International Service Desk. Its name is now the Immigration Service Desk.