How the Netherlands managed to achieve an 82.6 percent record electoral turnout during the pandemic

Organizing elections in times of social distancing is no easy task. The Netherlands showed it’s possible and did not repeat the mistakes made in France and in the USA, both of which saw the number of Coronavirus cases increase around their elections. The Northern Times contributor Antonio Di Noto looked at how things went in Groningen.

Where usually football supporters wave their scarves, there were voters casting their ballots, large red pencils, and uncomfortably large polling cards. FC Groningen’s stadium served as a polling station as the country held an election in the midst of the Covid-19 pandemic.

Regardless of the results, the 2021 elections in the Netherlands have been unlike any other so far: with Covid-19 still spreading among the population, a lot of work went into guaranteeing a safe vote for the Dutch.

“You’d have more exposure to the virus going to Albert Heijn than voting”, says Salomon Varwijk, chief of elections in Groningen. The comment came on March 16, when 15 percent of eligible voters had already cast their ballot.

Such a high percentage of early voters was achieved because this year, the first two days of elections – March 15 and 16 – were dedicated to allowing the elderly and people with underlying diseases the chance to vote. On top of that, citizens older than 70 could choose to vote by mail, an option that proved to be hugely popular. . The general population voted on March 17.

The particular solutions brought in specifically for this election, alongside by-now-normal plastic screens, social distancing, hand sanitizing, and mask wearing came at a cost: the budget for the elections almost doubled across the whole country. “Normally [for Groningen] I’m allowed to spend around 700 thousand euros, but this year we’ve already spent 1.3 million”, said Varwijk.

Many polling stations in Groningen had to be changed altogether, since they were located in small buildings that would not allow social distancing. Traditionally, schools and retirement homes were used for the elections, but these two options were unsurprisingly not available this year. As a result, 90 of the usual 150 polling stations had to be changed, and voters informed. New locations included tents, many churches, and the Euroborg stadium. 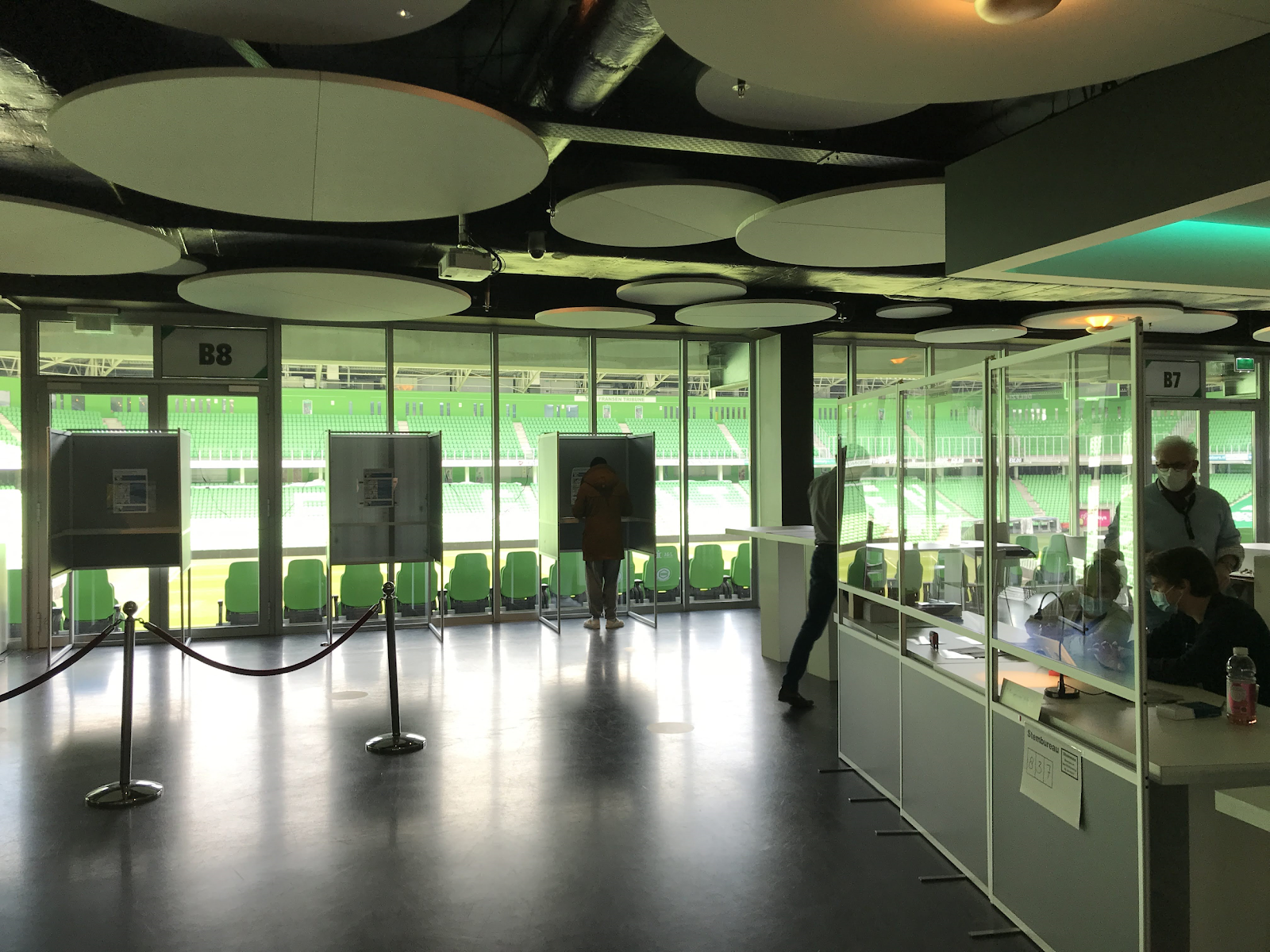 One of the many unusual polling stations in Groningen: the Euroborg – Hitachi Capital Mobility Stadium, home to FC Groningen. | Photos: Antonio Di Noto

Exceptional measures implemented nation-wide include the possibility for the voter to proxy up to three votes on top of their own; as well as the druktemeter. This software, whose name literally translates to “pressure meter”, showed how many people were present at the chosen polling station at any given moment. These steps allowed people infected with COVID-19 to easily send somebody else to vote for them, who in turn could as easily check the best moment to cast the ballots, based on the live crowdedness shown by the druktemeter. 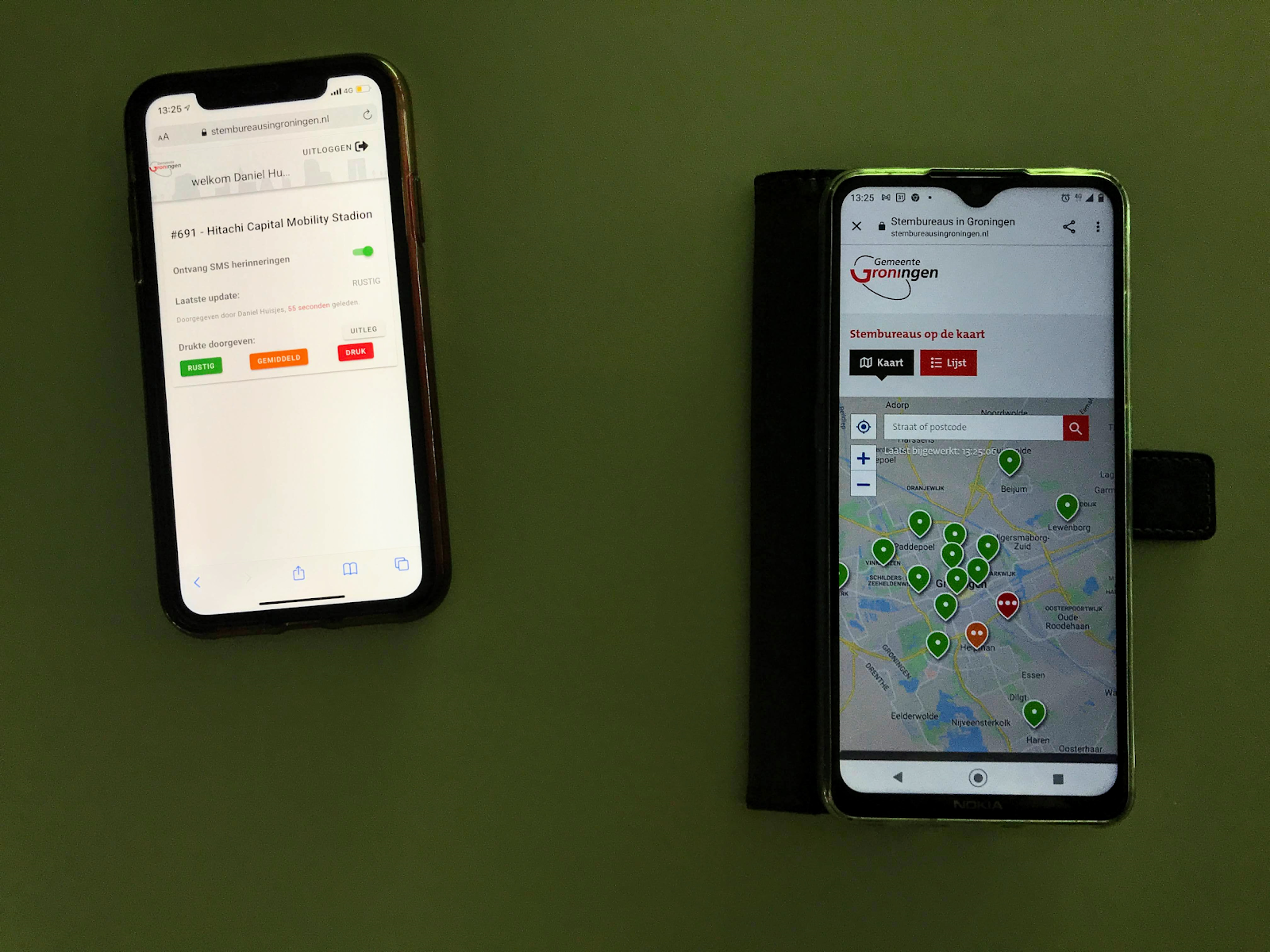 The druktemeter in action. An additional staff member at every polling station constantly checked the correct following of the rules and monitored how many people were present. The situation was then displayed live on the website of the municipality through a color code. This caused the number of members of each polling station to rise from three to four. | Photo: Antonio Di Noto

When asked whether or not he expected the number of infections to rise due to the elections, Varwijk was sure it would not. “Considering an 80% turnout, we are expecting around 850 people in every polling station on the 17th, which is not that busy”, he said. That’s about one person per minute, since polling stations stayed open from 07:30 to 21:00. “We will definitely not witness scenes like the endless queues we saw in the USA”, concluded Varwijk.

In comparison to the other countries whose elections were initially scheduled to be held during the pandemic, it is evident that the decision of the Netherlands to follow through with the vote follows the main trend. At the beginning of the pandemic, many countries postponed their elections, but already by July, most elections around the world were being held on schedule.

Not many analyses have been conducted on the correlation between COVID-19 infections and elections. However, one study has shown that a year ago, when 20 million French people voted in the municipal elections, they caused the number of hospitalisations to increase by 4,000 two weeks later.

Nevertheless, that was in the beginning of the pandemic. Knowledge about the virus and how to control it is much more advanced now.

Indeed, other studies have found that in the USA, no increase in the number of infections has occured because of the primaries vote. On the other hand, researchers at Stanford University did find a correlation between the spread of the virus and Trump’s in-person campaign rallies, which caused 30,000 new cases and 400 deaths.

In the Netherlands, such rallies did not occur, except for those held by Thierry Baudet,  leader of the conservative party Forum voor Democratie, who embraced COVID-19 scepticism . FvD just quadrupled its seats in parliament, from two to eight.

So far, Varwijk’s predictions have proven true. The turnout did not suffer the exceptional circumstances, and even grew since 2017, attesting to a 30-year national record: 82.6% (in Groningen the figure was close: 81.6%). In addition, judging from the lack of long queues outside of the polling stations, the flow of people too, was managed as expected. 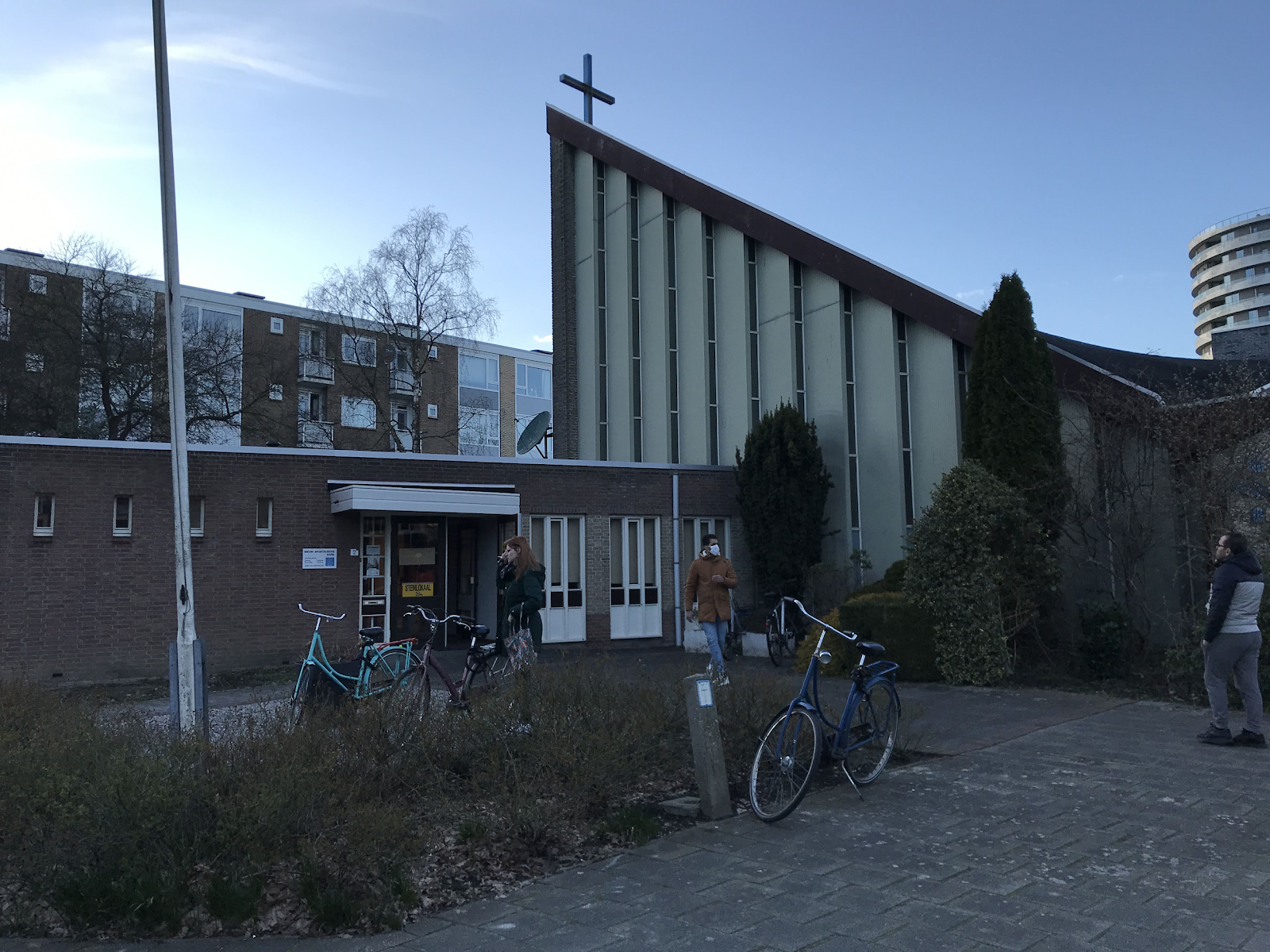 No substantial queues formed at polling stations. Here, only a few people are waiting to cast their ballot at the Nieuw-Apostolische Kerk of Populierenlaan, Groningen. The pictures were taken in a time – from 17 to 18 – that could have possibly been really busy. | Photos: Antonio Di Noto.

Antonio Di Noto is a 23-year old journalist from Venice, currently based in Groningen. He has a passion for interesting statistics about the world and makes his best to explain complicated things in a simple way.

UMCG and RUG to investigate Coronavirus transmission within families

UMCG and RUG to investigate Coronavirus transmission within families