The iconic Peerd van Ome Loeks, a statue of a man and a horse, went missing overnight at the Groningen central train station.

NBK Noord, a branch of a national maintenance company, has confirmed to RTV Noord that they have the horse statue and that it was hauled away as a prank. Dolf van Dijk, who works with NBK Noord, says that earlier reports that the statue was taken away as a form or protest are utter nonsense. Van Dijk also said that it is not unusual that the municipality was not informed about the plans, since the local government is not typically involved in such matters.

An anonymous tip came in to RTV Noord on Monday morning claiming that the statue was “in safe hands” but had been taken as a form of protest. A photo submitted to Sikkom showed Wagenborg Nedlift moving the horse statue from its pedestal.

The anonymous tipster told RTV Noord that the statue was removed around 4.a.m on Monday and was taken “somewhere in the province”. The protest action was apparently in response to supposed plans to move the statue to the under construction Groninger Forum. The tipster said that the plan was “unacceptable”, so the statue has been moved back where it belongs: De Slingerij, which is the name of a former inn in Groningen where the eponymous “paard van Ome Loeks” supposedly lived.

A spokesperson for the municipality of Groningen says that they are “in the dark” about who may have taken the statue. “As far as we are aware, there was no planned maintenance on the statue, but we definitely would have been informed if anything like that was planned. The statue underwent major renovations recently, so there was no reason to remove it from its pedestal, which is also no easy feat.” 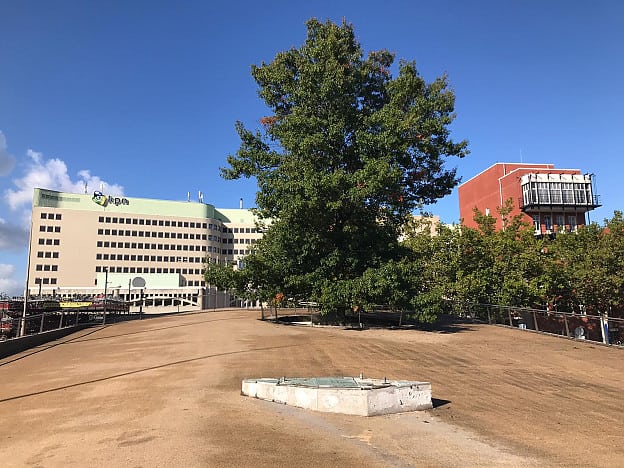 The Groninger Internet Courant reports that municipality has not yet contacted the police, but a spokesperson said they would get the cops involved if no one at the municipality is able to explain the statue’s disappearance.

A municipal-level faction, 100% Groningen, recently campaigned to have the horse statue moved to a more prominent location in the city, but faction chairperson Marjet Woldhuis told RTV Noord that the party is not connected to the statue’s disappearance.

Het Peerd van Ome Loeks (Uncle Lucas’ Horse) is considered a symbol for the city and refers to a regional folk song about a dead horse. The white statue, rendered in exaggerated, bold lines, of a man standing next to a grazing horse was designed by Jan de Baat and was placed at the Groningen train station in 1959.