History of earthquakes and natural gas in Groningen (update)

by Traci White
in News
1

On Saturday, 8 October 2022, a 3.1 magnitude earthquake struck Wirdum, a village 26 kilometers northeast of the city of Groningen. Two weeks on, there have been more than 1,100 damage claims filed by impacted residents. It’s one of the strongest of thousands of tremors that have hit the province in the past 25 years as a result of natural gas extraction operations.

This story was originally published in January 2018 and has been updated in October 2022.

Production has been severely reduced in recent years in an effort to cause fewer quakes, but the October quake was the strongest of 2022 thus far.

The introduction of a story about the long and ongoing history of earthquakes in Groningen is sadly predictable, and timeless: a quake, its magnitude, a location, a time, a number of damage reports. Yet the seemingly low magnitude of the quakes are deceptive, and not reflective of the psychological, physical, emotional and financial toll the persistent tremors take on the people living in the region.

The location of most of the gas is relatively shallow, and with little forestation and only small clusters of developed areas, there is not much on the surface to absorb the impact of the earthquakes in the province. When they do happen, their impact can be felt many kilometers away from the epicenter. The Wirdum quake over the weekend was located around 3 kilometers underground (by comparison, most quakes caused by seismic activity originate around 10 kilometers below the earth’s surface)

When the Slochteren gas field was discovered in the province of Groningen in 1959, it was not immediately clear just how large the natural gas reserve was. Three kilometers underground lie a 2.8 trillion cubic meter gas field contained by the sandstone above: the reservoir is naturally sealed by the geological development of a layer of salt.

Gas extraction operations occurred in Groningen for 20 years without any induced earthquakes, but according to figures from the Dutch meteorological organisation KNMI, there were 1,470 earthquakes in the Netherlands between 1986 and 2018: on Christmas Day 1986, a 2.8 quake struck in Assen. 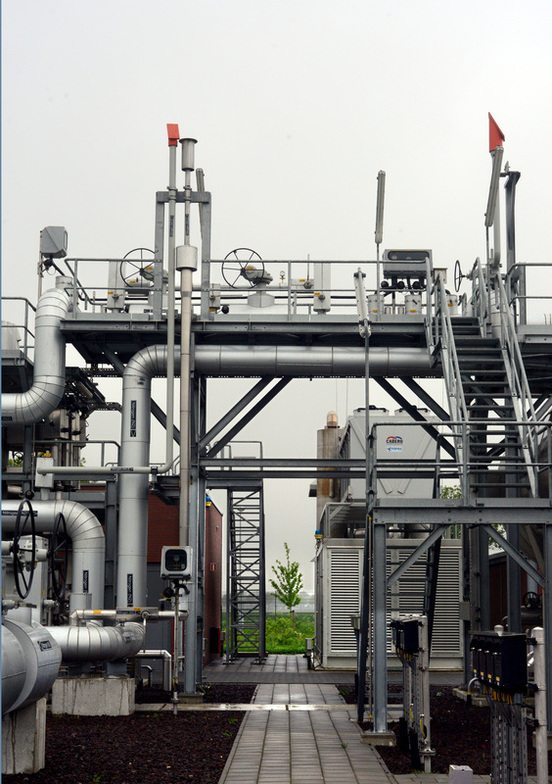 Twenty years later, the quakes had become so frequent that there was one earthquake every three days on average: there were 133 confirmed earthquakes in 2013. Of those, 121 occurred in the province of Groningen. 2013 also marked the peak of gas extraction operations – 53.9 billion cubic meters – since the quakes became a common occurrence.

Nine quakes have been measured above 3.0 on the Richter scale since 2001. The biggest measured quake so far – 3.6 – occurred in 2012 in Huizinge. Starting in 2013, the Dutch government called for the gas production operations to pump the brakes to prevent more earthquakes.

That does not necessarily mean there were more of these smaller quakes: NAM’s detection and measurement network was upgraded in 2014, which made it easier to pick up on activity below 1.5 magnitude. In 2020, there were 90 quakes, 69 of which were extraction-induced tremors in Groningen.

In the so-called “gas year” 2021-2022, the cap was far lower: 4.5 billion cubic meters. As of October 2022, the operations are at their lowest in decades, and the goal is to keep it that way, with a limit of 2.8 billion cubic meters being extracted (which is considered the minimum to keep the gas accessible) – despite pressure from a smattering of voices in the political realm calling to crank up production again in the face of rising energy prices due to the war in Ukraine. 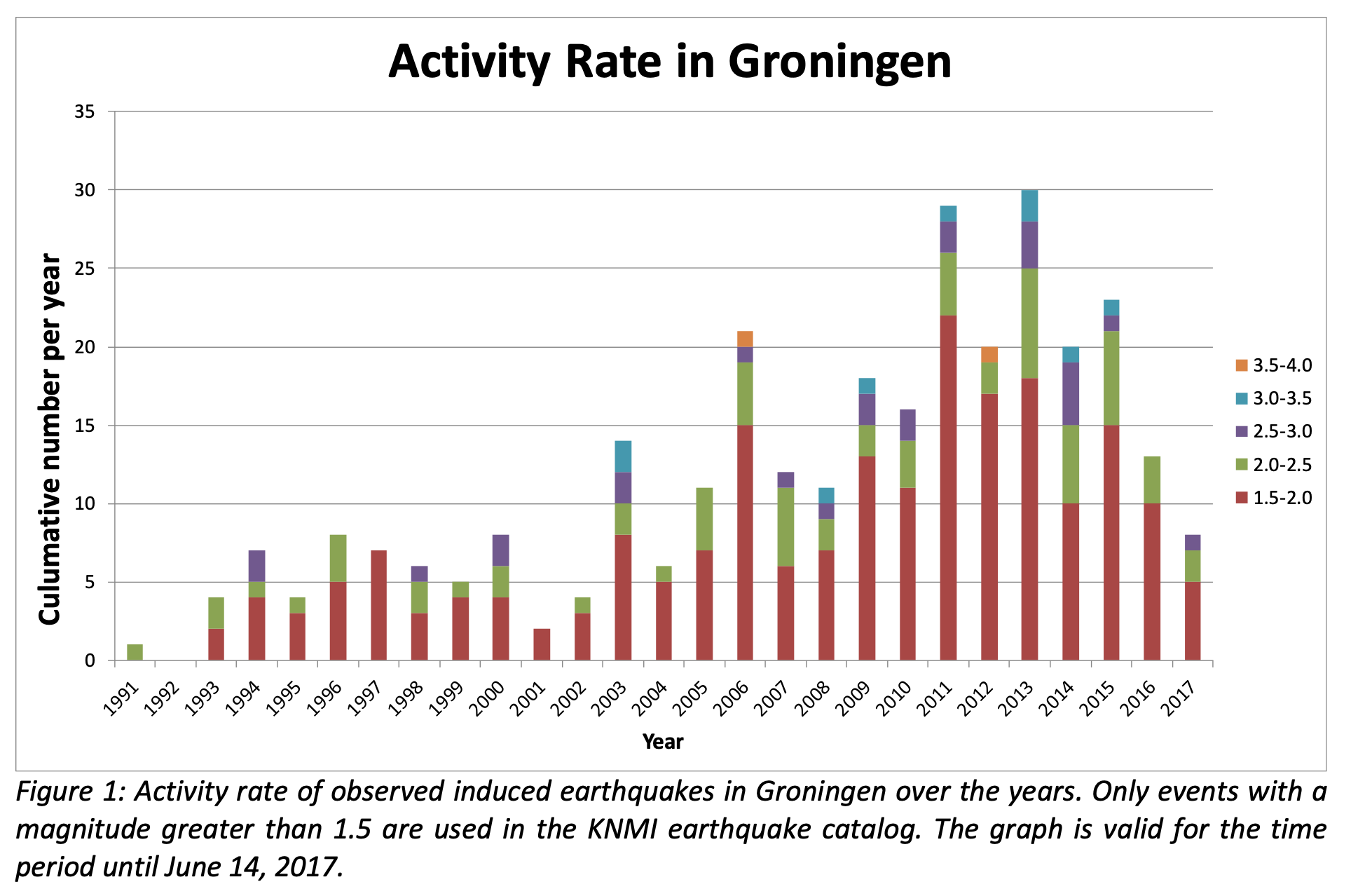 Groningen is the location of the most earthquakes by far, but it is not the only Dutch province where gas extraction occurs. Friesland and Drenthe also have sites where natural gas is extracted or refined, including in the vicinity of the Wadden Sea (with recently announced plans to scale up extraction north of Schiermoonikoog).

But roughly half of all the natural gas used in this country comes from the Slochteren gas field in the province of Groningen. Natural gas is a highly common energy source across the Netherlands: 40 billion cubic meters are used domestically in the Netherlands annually on average. Natural gas is more or less just methane – only ten percent of natural gas consists of other gases. Methane can trap significant amounts of heat in its unburned form, and a considerable quantity can escape during extraction and transportation.

Fifty years of extraction have resulted in roughly 1,700 billion cubic meters of gas being pumped out of the ground, which is about two-thirds of the total estimated amount in the reservoir. Extraction operations in the gas field in Groningen are run by the Dutch Petroleum Company (Nederlandse Aardolie Maatschappij BV), better known as NAM. NAM is co-owned by Royal Dutch Shell and ExxonMobil. Roughly 1,800 employees work for NAM, but most of the facilities across Groningen are largely unmanned: the majority of those jobs are at NAM’s headquarters in Assen, in the northern province of Drenthe.

Over the past 50 years, revenue from the extraction, refinement, storage, transportation and sales of natural gas in the Netherlands is estimated to be above 250 billion euros, which has been primarily reinvested in infrastructure, including tunnels, train tracks, upgrades to Dutch highways, water management, train stations and urban development initiatives.

NAM has set aside 1.2 billion euros to compensate the thousands of people living in the earthquake-prone areas of Groningen, but the historic brick farmhouses dotting the previously peaceful landscape were not built to withstand sustained seismic activity.

Many structures have been so severely damaged that they have been condemned or torn down.In total, 3,300 buildings have been demolished in the province because of earthquake damage since 2012. Children from two elementary schools in the town of Loppersum were forced to attend classes elsewhere because their schools were deemed unsafe: one of the schools, Prinses Beatrix, was torn down in 2017.

In 2021, ongoing research from the University of Groningen estimated that up to 100,000 people in the province had suffered damage from the quakes. While the persistent quakes have taken a toll on the residents of the province mentally, financially and emotionally, as far as has been made publicly known, no injuries or deaths have directly resulted from the manmade quakes.

A post shared by Word on the Wire (@wordonthewire)

But the locals are not taking it lying down: a handful of fierce activist groups (Groninger Bodem Beweging, Groningers in Opstand, Schokkend Groningen, among others) have cropped up over the past decade, organizing torch-lit marches, tractor-filled demonstrations, and protesting at gas extraction sites throughout the province.

Several marches were held in 2018, followed almost exactly four years later to the date in 2022. It remains to be seen if similar actions will crop up in the aftermath of the Wirdum quake, but as long as the tremors continue, speaking out on behalf of the victims of the quakes will remain necessary.