A young woman from Groningen hit the front page of Reddit over the weekend with a photo of her cat-shaped tattoo. What’s so special about it? The “cat” is actually a birthmark, and the tattoo portion is a nose and whiskers.

A user named ballooisawesome posted a photo of her simple tattoo – a tiny nose and whiskers inside of her cat-shaped birthmark – into the tattoos subreddit on Sunday afternoon. Within five hours, the post had nearly 22,000 “upvotes” and had reached the front page of the popular content aggregation site. 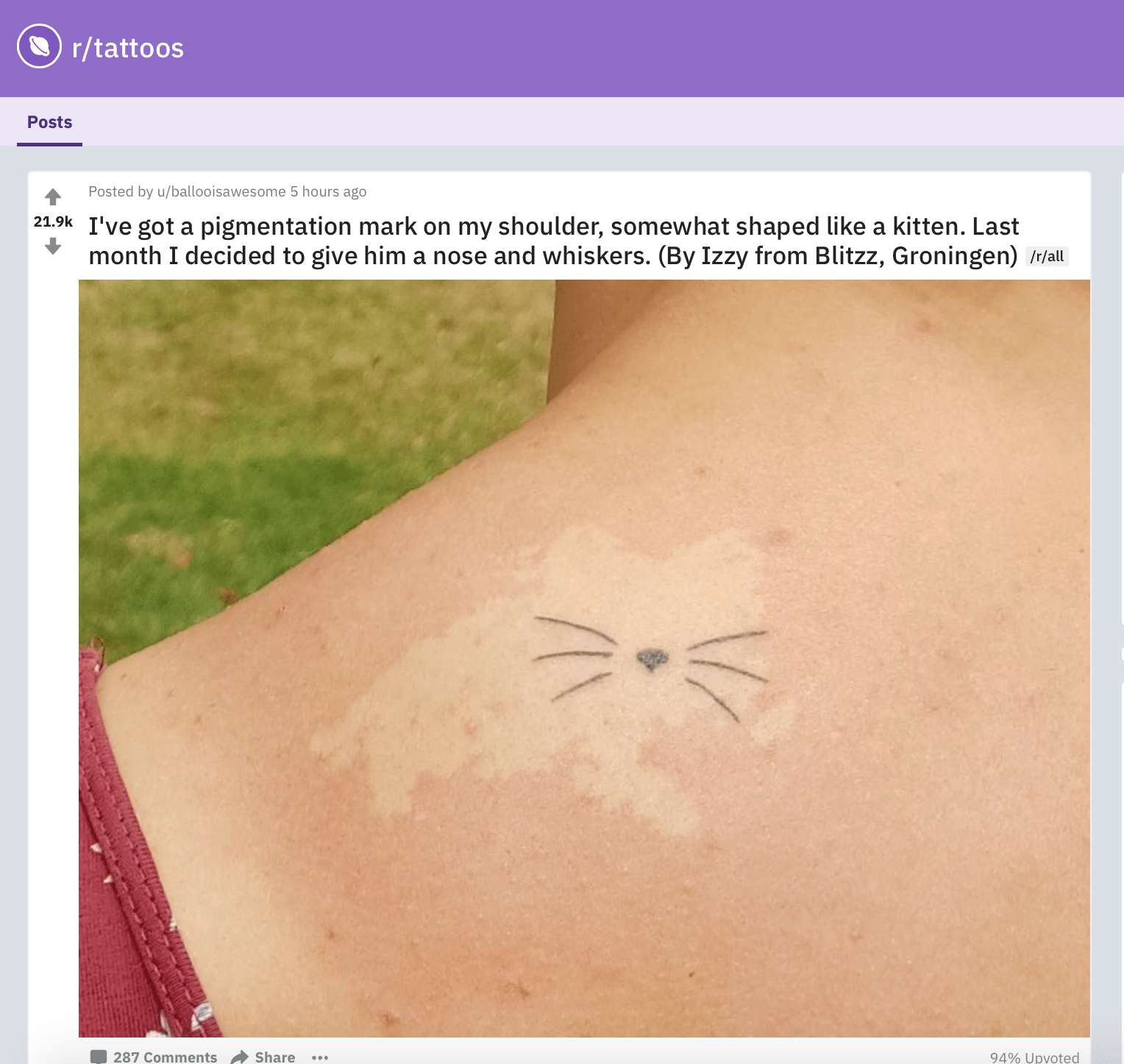 Ballooisawesome, who says she is a 19-year-old student in the artificial intelligence department at the University of Groningen, is a “Groninger through and through, born and raised here”, so it makes sense why she would choose a local tattoo parlour to create her special tattoo. In the Reddit post, she mentioned that the tattoo was done at Blitzz, which is located on the Poelestraat in the centre of Groningen.

According to the Reddit user, several friends pointed out to her a couple of years ago that the birthmark bore a resemblance to a feline: the patch on her left shoulder looks like it has two pointy ears and a tail. The idea to turn it into a tattoo came about around year ago, and was also inspired by her friends: “A friend of mine had two tattoos, both done by Blitzz and she was really positive about it. The site looked neat and okay. Then for her third tattoo, I joined her.” She says that the tattoo cost 70 euros.

Although she is very pleased with the tattoo, she did not expect it to get such a big response online. “I was definitely surprised when my post reached so many upvotes! I was doubting whether I should post it, because I didn’t think it was that special. I had counted on like 300 upvotes, max.” There were so many comments coming in at a certain point that she was not able to respond to them all. “I got a lot of comments from people with interesting pigmentation marks that also maybe wanted a tattoo, and I really want to encourage their creativity.”

She says that this was her first tattoo, and there are no immediate plans to get another one just yet. While the design is certainly simple, she says that it still has a lot of meaning for her. “Mine stands for a lot of things. Last year was pretty rough and full of misfortune, and since last spring things finally were looking up again. And to mark the end of that “Era of Bad Luck”, I finally got the tattoo I wanted.”

It may not come as much of a surprise, then, that she describes herself as a cat lover. “I love both cats and dogs though, I just bond better and faster with cats. Cats seem to like me better than dogs, which certainly helps.”

“Noise regulations have to change in Leeuwarden”