Groningen-Randstad express train to be tested on Friday night

Between midnight and 6 a.m., the Dutch national rail service NS will be testing out accelerated train service between Groningen and the Randstad in the hopes of shaving 15 minutes off the current travel time.

RTV Noord reports that the train will travel back and forth between Groningen and The Hague. The route will not stop at certain stations that are normally included on the route (including Assen, Zwolle, Lelystad and Leiden) and will operate at 160 kilometres per hour between Kampen and Almere, where the train normally travels at 140 kph. 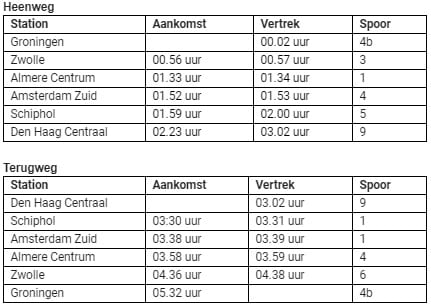 The test will be carried out in a window where few other trains will be running in order to limit delays. Although the test is not open to average travellers, there will be some several government officials and other specially invited passengers on board.

The accelerate service is aiming to shave 15 minutes off of the current travel time between Groningen and The Hague, but NS wants the trip to eventually be half an hour shorter. Currently, the trip takes two hours and 33 minutes, and the test on Friday is expected to be 12 minutes shorter.

Economic and political figures in the north have been calling for a better connection between the north and the western metropolitan cluster known as the Randstad (Amsterdam, Rotterdam, The Hague and Utrecht), pointing out that improved train service between the regions would make it easier to commute and support economic activity in the north.

Leeuwarden and Assen will have their own accelerated services tests in the near future NS is looking into improving the connection between Leeuwarden and the west by prioritising better transfer times in Zwolle. While the train test on Friday will not stop in Assen, RTV Drenthe reports that the next NS test between the north and the west will include the Drenthe city.

Issues with bridge and floodgate systems on Afsluitdijk

Riot in the Centre of Groningen, Mayor issues emergency order

Get your career started in the manufacturing industry: Live Networking Event on November 11

Issues with bridge and floodgate systems on Afsluitdijk

More than one million euros in subsidies for Dronehub Eelde