by The Northern Times
in Dutch history
0

An analysis of the origins of every street name in the city of Groningen by the researchers at the University of Groningen’s spatial data expertise centre, Geodienst, discovered that only one in ten named after a person was in honour of a woman.

Inspired by a similar data project in Amsterdam, the Geodienst staff shared their results – presented on an interactive map – with De Correspondent, a membership-based journalism platform in the Netherlands. The Groningen analysis evaluated all of the streets located in the municipality of Groningen, and 448 roads were identified as being named after people within the city limits. Groningen’s Geodienst staff determined the gender and nationality of the person the street was named after, and which century he or she was born in.

The Geodienst project was inspired by an Amsterdam map, which was created by Bregje Hofstede, Leon de Korte and Sara Sprinkhuizen after analysing 5,419 streets in the Dutch metropolis. The Groningen analysis concluded that of the 448 streets in the city named in honour of a person, only ten percent were named after women: the map below shows the roadways named for historically significant women in orange, and roads named after men in purple. 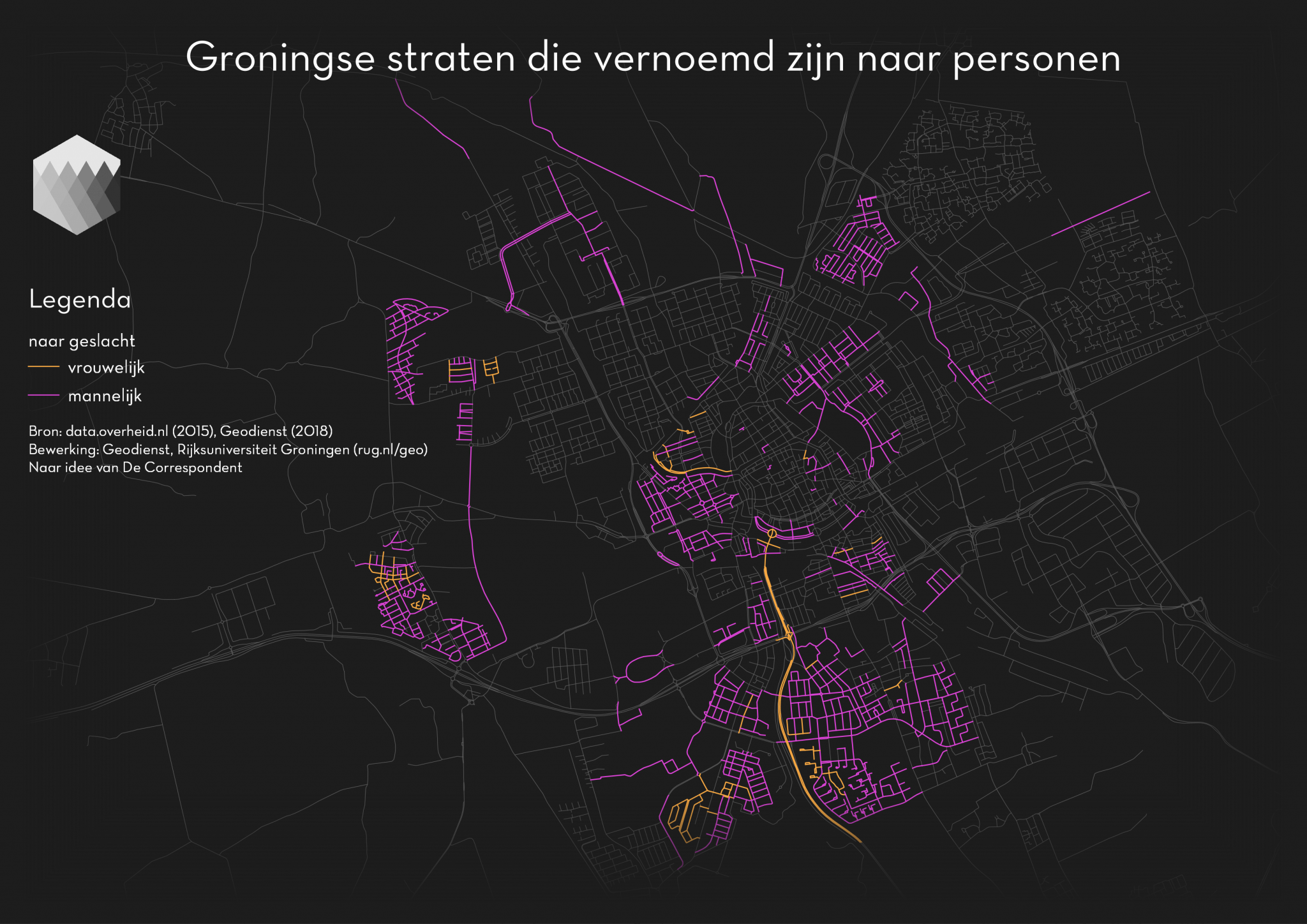 Another fascinating discovery was how many different nationalities are represented among the Groningen street names: individuals from Algeria, the United States, Belgium, Britain, Canada, Chile, German, France, Greece, Hungary, Ireland, India, Israel, Italy, Austria, Poland, Russia, El Salvador, the Czech Republic, Sweden and Switzerland all have streets named after them in the city. 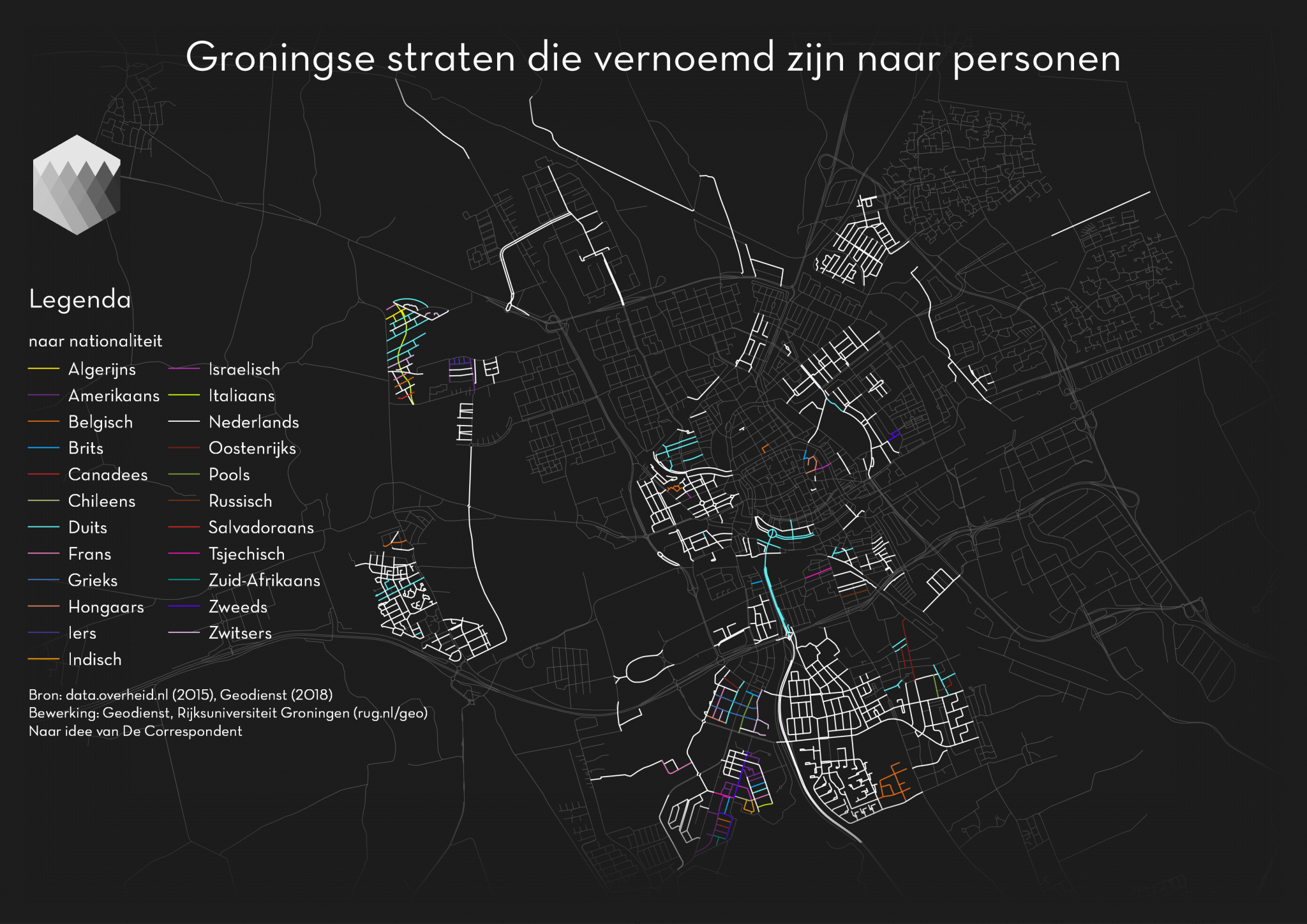 Compared to Amsterdam and Utrecht, Groningen had the fewest streets named after women, even though neither of the other two cities analysed thus far were even close to equal representation of the genders. With plans to build up to 2,000 new homes along the Eemskanaal in the city, as reported on by the Groninger Internet Courant, the city has a prime opportunity to name a few more streets in honour of accomplished women.

There has been a renewed level of attention paid to the (mostly) men and women whose names define the streetscapes of Dutch cities in recent years, particularly those with connections to the nation’s colonial past. In Groningen in 2017, Anti-Fascists called for names in the Zeeheldenbuurt (Naval Heroes), including Piet Hienstraat and Michiel de Ruyterlaan, to be changed. Back in 2015, Erik van Loon appealed to the street name commission to change the names of streets in the so-called Afrikaanderwijk in Rotterdam, many of which refer to Dutch Afrikaners in South Africa. A prominent tunnel in Amsterdam named after Jan Pieterszoon Coen, who led the Dutch East Indies company and was responsible for the deaths of thousands of Indonesians, has kept its name despite a number of complaints.

In response to the reporting by De Correspondent, which also analysed the origins of street names in Utrecht, the Dutch feminist group De Bovengrondse decided to give prominent female scientists, politicians and artists the honour of gracing unofficial city streets with their names: according to the group, Amsterdam’s Rokin should henceforth be known as Beyoncé Boulevard.

Graphics courtesy of the Geodienst department