Experience Groningen: Beyond the Student Bubble | The Northern Times

Experience Groningen: Beyond the Student Bubble

For the fifth year in a row, the Experience Groningen festival is getting internationals students out of their bubble. While many stadjers and cultural institutions taking part in the event are excited to welcome them, local businesses still need some convincing.

Up the bold, graffiti-splashed stairwell at Simplon, Phillippe Moreau and Anastasija Zihareva are busily folding brochures and making the final preparations for Experience Groningen: Beyond the Student Bubble. The festival will be held on 8 and 9 March, during which hundreds of recently arrived international students will get exclusive tours of cultural institutions, sports clubs, businesses and sightseeing highlights in the city and province of Groningen. Day one is focused on the city and day two is a bus tour of the highlights of the province, and there will be a party to round off each day.

Project leader Zihareva and assistant project leader Moreau have both been involved in the festival for several years in various capacities. They started out as the target demographic for the two-day festival themselves, originally coming to Groningen as international students.

Zihareva says that this year’s edition will be trendier and hipper with a firm focus on having a good time. New additions this year include giving students a chance to chat with both of Groningen’s mayors – “day” mayor Peter den Oudsten and night mayor Merlijn Poolman – and get a behind-the-scenes look at the electronica and contemporary art festival, Clash.

“The city has a good nightlife and it’s nice, cultural city, but it’s so safe”, Zihareva says. “Everybody here is so highly educated so there is that balance between people who like to party so much but are so highly socially responsible. This makes it a perfect match. Amsterdam is like, all the people in the world who just want to get stoned.”

The slogan of the festival – “beyond the student bubble” – sums its goals up quite well, Moreau says. Experience Groningen, has come into its own over time: while the ESN Introduction Week is “a great start for international students and exchange students to party and so on, this event goes further in terms of culture”, Moreau says. “I think after this event, international students can really answer the question when someone asks them, ‘what is Groningen like?’”

They say that they have seen the event steadily grow in popularity since the first edition was held in 2014, which attracted 300 students, but the organisers say that in order to ensure that participants have plenty of quality time to get to know the city, the festival will remain relatively small scale. This year’s edition is capped at 400 international students.

Participants can choose two out of three tracks for day one: culture, sports and business. Zihareva says that the festival organisers choose activities and tours that give more in-depth access than a normal visit on any other day. While most cultural organisations were quite eager to get involved, finding companies to take part in the business track was something of an eye opener, Zihareva says.

“A lot of businesses in the city are not open for internationals because they’re not their potential labour force. ‘Is it only for internationals? Then no, we’re not interested. So that was really surprising”, she says.  “They cannot afford to take the time to deal with intercultural clashes, especially smaller companies. They have to spend their marketing money and time and they have to invest energy, and they don’t usually see nationals as future employees.”

The universities and the municipality are eager for Groningen to be seen as an international destination, but many companies still seem more than a little reluctant. But that connection to the inner circles of the city that are usually inaccessible for outsiders is precisely what the festival wants to achieve. In order to break the cycle of seeing internationals as short term visitors rather than long term residents, getting a foot in the door at a local company can mean the difference between being able to stick around after graduation or having to move away for work.

“They’re living in a parallel reality”

The part of the festival that always seems to have the most lasting effect on participants is the Meet and Eat, during which Dutch residents invite international students into their homes and get to know each other over dinner. The organisers say that with a month to go before the festival starts, the list of Dutch volunteers willing to host a dinner is already nearly full.

“The Meet and Eat is an emotional experience”, Zihareva says. “We’ve noticed that it’s really interesting for the older generation of Dutch people in particular because they are wondering, who the hell are all these people who, in 20 years’ time have invaded my city – in a good way? And they are also really curious, but there is no portal for them to meet. They’re living in a parallel reality.”

Moreau says that the shared meal has led to some students becoming pen pals with their Dutch hosts, sending them post cards after moving away from the city. Many Meet and Eat sessions extend well beyond the allotted slot and end up at the local pub, sharing stories over a biertje or two.

Since “student” is in the name of the event, younger internationals enrolled at the universities in town are obviously the main focus of Experience Groningen. The event is sponsored by the Hanze, the RUG, ESN and the province of Groningen. Zihareva and Moreau say that other internationals are more than welcome to sign up too, but they are aware that the needs and interests of more mature residents may differ from the younger crowd.

Maybe an Experience the North festival in the future would be the next step for the wider international community in the region – or Experience [Insert City Here]. Moreau, who is from Berlin, says that he has gotten inquiries about organising a similar event in the German city. “I would do that for 12 euros”, Zihareva says.

Tickets for Experience Groningen are available online and can also be bought in cash at ESN’s offices (Pelsterstraat 23) starting next week. 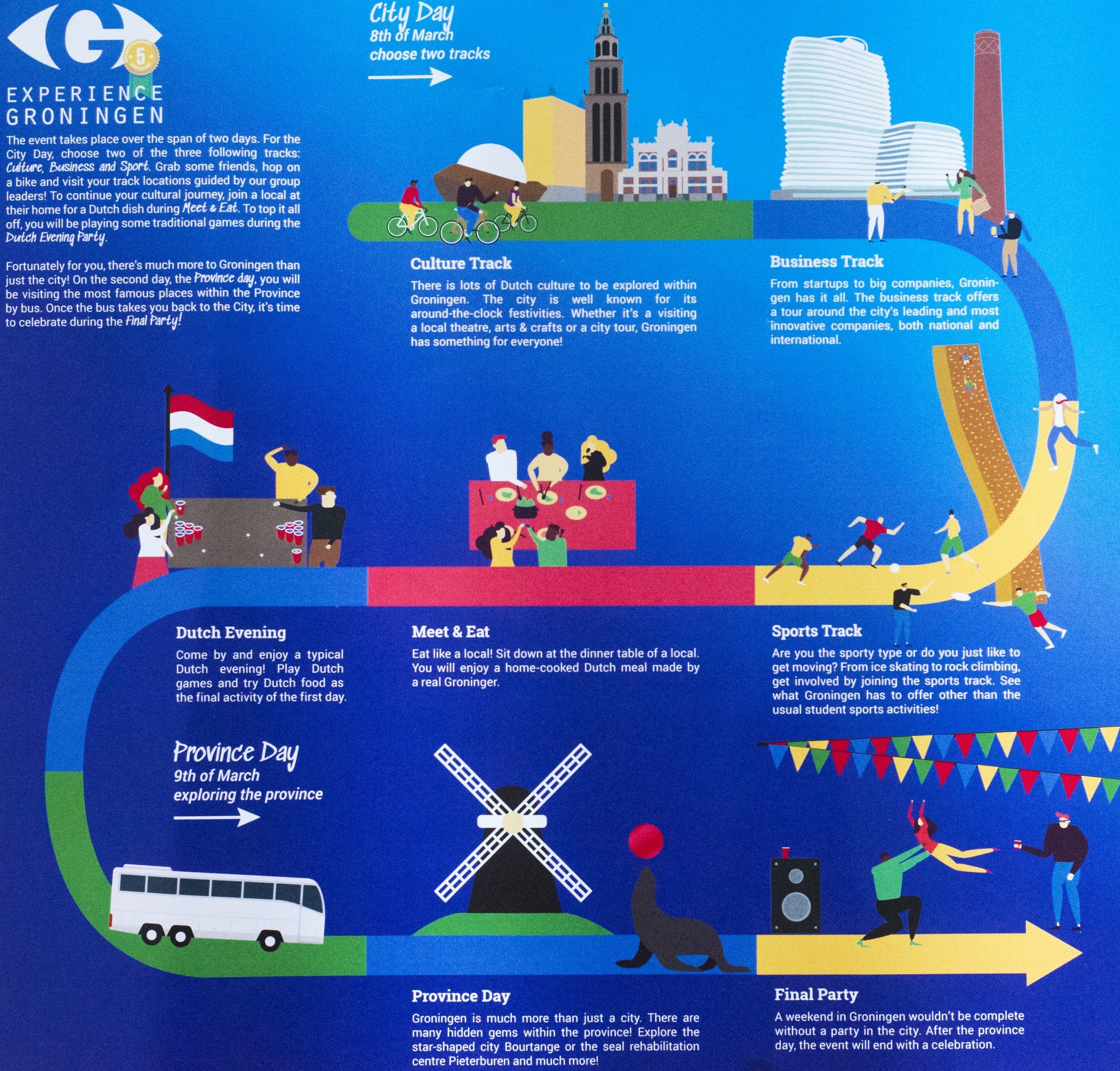 Talk with the mayor

Sand mining in IJsselmeer will not move forward