Perhaps it was the past two years spent in a bubble that had kept me out of the loop, or maybe I could blame it on my ADHD. But whatever the reason, for the last few weeks, I had managed to walk past countless posters screaming ‘Eurosonic!’ and had stubbornly confused the event for Eurovision, the iconic annual singing competition.

In fact, when a friend talked about going to a Eurosonic event on Wednesday, I asked which country she thought might win… An uncomfortable silence followed thereafter.

So, for anyone as oblivious to the obvious build up to a big-scale event across the city as I have been: let’s learn together!

Eurosonic Noorderslag, otherwise known as ESNS, is an annual music festival event that takes place over the course of four days in our quiet student city of Groningen. ESNS has been an event known for featuring the best up-and-coming artists from all over Europe for decades now, with this year marking the 37th edition.

Each year highlights a different country, and Spain is in the spotlight in 2023. ESNS is a festival where you can enjoy well-crafted music, but it also has professional benefits, hosting a conference to make new connections and expand your network. For any more information on how the event work, you can follow ESNS’s guide to Eurosonic!

If you haven’t secured a ticket yet, don’t worry too much. While tickets to most festivals are sold out, the ESNS website has a page where you might be able to buy tickets up for resale.

As an international, it can sometimes feel like Groningen is too small to have anything new or interesting. I’m here to tell you that that’s completelywrong. Eurosonic is proof that, despite its size, Groningen really is an international-oriented city. Right here in the north, we Groningers have the opportunity to listen to talent from all over Europe. Hope to see you there.

Since its 25th anniversary in 2011, ESNS has also provided a free open-air festival called Eurosonic Air. It is annually held in the Grote Markt in the city centre and remember if you get lost, head toward the white domes! The following (predominantly Dutch) artists will be performing at Eurosonic Air, and I can recommend making an extra effort to catch Orange Skyline, the ‘prodigal son’ who started out as a post-punk revival band in Groningen. You can listen to many of the participating artists in this Spotify playlist. 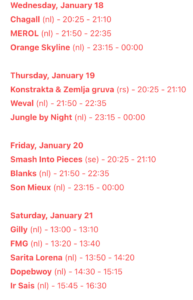