Construction of the new 800-meter long bicycle and pedestrian bridge between Winschoten and Blauwestad, called the Blauwe Loper, has started. As reported by the Groninger Internet Courant.

The first piles were driven in January, and a celebration will be held on Thursday 27 February, together with local residents, deputy Fleur Gräper-van Koolwijk and alderman Bard Boon. 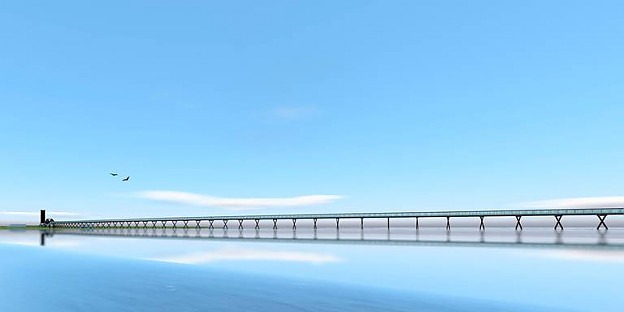 In Winschoten, the bridge will connect a cycle route from the Hoorntjesweg to the center. There will also be a connection to the Stadspark in Winschoten. The Blauwe Loper has a unique design and is made from as many sustainable materials as possible. The bridge will be ready for use by the end of this year.

De Blauwe Loper is a joint project of the province of Groningen, municipality of Oldambt and project agency Blauwestad. The province is contributing 6 million euros to the project, and the municipality 500,000 euros.

More information about the project can be found here.

Imaga via the Groninger Internet Courant