Plans for a revamped square in front of Der Aa-kerk in Groningen include large flower beds surrounded by a raised seating edge and a smattering of chairs and small tables beneath the chestnut trees.

The Groninger Internet Courant writes that the definitive plans for the “guest room” space in front of the church will replace the current layout of the square –  three small green patches with chestnut trees and two intersecting footpaths – with a small park where people can relax in the busy heart of the city. 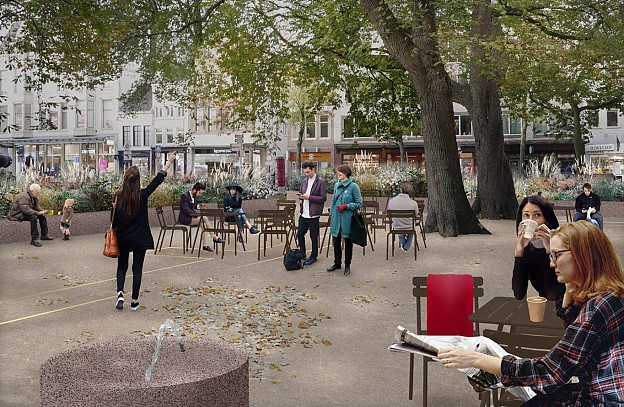 The definitive plans have evolved based on earlier proposals. The raised seating edge will now be a darker stone which is more in keeping with the colours of the building materials used in the church, and  lighting will not be suspended from the trees. The lighting plan for the square is still being worked out.

The Groningen city council is interested in possibilities to organise events in the space during special occasions and holidays, such as Sinterklaas, Christmas and Eurosonic Noorderslag.

Crossing roe deer cause pile-up on A32