It promises to be an eventful week for the residents of Meeden in east Groningen: the Council of State is spending three days to determine whether or not to move forward with plans to build dozens of wind turbines around the town.

The Groninger Internet Courant reports that residents have been vocal in their opposition to the plans: a bus full of opponents to the wind turbines travelled to The Hague on Monday to attend the hearing about Windpark N33.

The Council of State is an advisory body to the Dutch government that the cabinet must consult with on proposed legislation, and the Administrative Law division is one of the highest courtst of appeal in the country.

The Groningers are hanging their hopes on the Aarhus Convention. The document was created by 40 European countries and established rules regarding who has a say on environmental matters, such as building wind parks. The residents who object to the plans say that citizens were shut out of the decision-making process, which violated the rules of the convention. They believe that the plans were more or less set in stone before any public discussions took place.

The planned wind park in Meeden will consist of 35 wind turbines, the vast majority of which will be built north of the village in between the A7 and the N33. 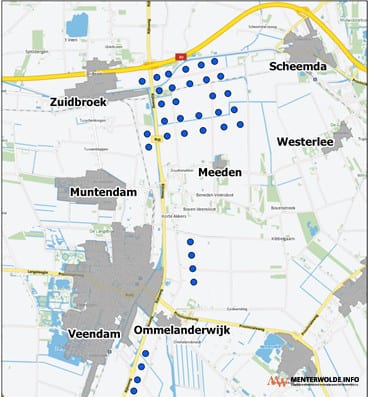 If the plans move ahead, the park will be built and operated by a consortium of companies, including YARD ENERGY Development, Blaaswind (a private company founded by local agricultural professionals) and Innogy, a German electric company.