The event sector in the Netherlands found itself in hot water due the current Coronavirus outbreak. But, not all companies in the sector are suffering equally. An entrepreneur in the Drenthe decided to re-think his business under the circumstances, to take advantage of new opportunities that could also play a new role for the event sector in the future. How can a company grow and hire new employees even during these, for the event-sector rather deadly times? We spoke with Dimitri Nashid Khali, co-owner of SEM productions, ‘SEM Works’ and TIMETOSPEAK.

Nashid Khali (30) is now co-owner of three companies. Having been interested in both music and technology from childhood, “after an internship at a technology company, I felt that I could do this better’’. And so it happened: at the age of 17, he became the owner of his first company: SEM productions.

Together with his partner, Bert Bouwknegt, Nashid

Khali is engaged in the production and technical implementation of events. “With our clients, we aim to find the best creative and technical interpretation of the event. When it comes to the performance, you should think of lighting technology, sound technology and video for concerts, festivals, congresses, theater and TV’’.

SEM productions not only provides clients in The Netherlands with the back-end of an event: ‘’every year we organize about 600 projects at home and abroad’’, says Nashid Khali. Soon a subsidiary, ‘SEM Works’, arose and this year ‘TIMETOSPEAK’ was established.

During production work in Dutch theaters, the idea of ‘SEM Works’ came up: ‘’many theaters have a permanent staff that is not sufficient for large numbers of productions’’. Because of this, Nashid Khali came up with the idea to set up a kind of specialist employment agency, which links specially-skilled people with theatres during their peak times.

Nashid Khali has lived in Meppel since he was three years old: ‘’A really nice city where a lot is organised”, he says.

“The event-sector is very well represented here and as a city we are offering event companies of the highest possible quality in various fields such as stages and construction, technology, video productions and event organisation.” This has enabled creative collaborations, too: ‘’I have been working with Time Star Media for many years now, and we have completed a number of projects together’’. Time Star Media is an animation company based just round the corner from SEM.

When the first signs of the Coronavirus emerged, Nashid Khali joined forces with Wouter Taal from Time Star Media: ‘’Just before the intelligent lockdown we looked together at the possibilities and opportunities that would arise during a possible lockdown. An event agency specialized in online and hybrid events soon emerged: ‘TIMETOSPEAK. The big advantage was that the type of service was not new and this allowed us to quickly build a good customer base’’. Because many events are important and continue to take place during the Coronavirus outbreak, ‘TIMETOSPEAK’ has developed a platform to support events. ‘’Through this way, official meetings and meetings can continue safely’’. With this, Nashid Khali has been able to prove together with Time Star Media that the current corona situation does not only cause difficulties within the event sector. On the contrary: “In about eight weeks TIMETOSPEAK has grown from an idea into a fully-fledged company employing about 22 people.”

Travel time is not a problem for the delivery of productions. In particular, the preliminary phase, in which there are a lot of meetings, takes a lot of unnecessary travel time: ‘’I assume that I will no longer have to drive to Rotterdam for half an hour, we will continue to do that online’’.

Drenthe also offers many advantages in entrepreneurship: “I love Drenthe and the mentality. Not too much talk, but just nice to deal with’’. This has also helped us to develop well as a company,” said Nashid Khali.

Despite the current situation, Nashid Khali thinks in terms of possibilities and new opportunities when the theaters can be open again. Especially for ‘SEM Works’, the temping agency for theater technology: “The work field will look different and we are responding well to that. With this we hope to further increase our market share’’. Nashid Khali sees a bright future for the event sector. Particularly because of the cooperation and intensive contact between the various companies: “Even now in the corona crisis this contact and cooperation has remained unchanged and we help each other where necessary’’. 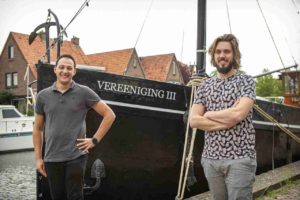 In addition, the new TIMETOSPEAK platform has brought a new development in the event world: “We are rolling out our platform to other European countries and we expect hybrid events to become the new normal’’. TIMETOSPEAK is still young at the moment, but we have great ambitions, according to Nashid Khali.

Enough growth is still possible and there is no lack of ambition: “Ultimately, the aim is to reach the top of the Dutch event sector, such as participating in complex large high-profile events.”

Looking back at the past thirteen years, SEM productions has become a serious player: “We do really cool projects’’. Nashid Khali is very positive about what he has achieved so far together with his employees: “I am really proud of what we have built up with the whole team in a relatively short time.” When I come to a project where I see our SEMmers at work, that also gives me a very proud feeling’’.