by Thomas Ansell
in People
0
Share on TwitterShare on FacebookWhatsapp

Born and raised in the UK, she’s run theatres, directed art festivals, and was one of the leading lights in delivering Leeuwarden’s programme as the European Capital of Culture 2018. We sat down with Claudia Woolgar to discuss Leeuwarden’s year in the spotlight, the uniqueness of the Northern Netherlands, and how to make something memorable.

Claudia is fairly all-action. At the end of most weeks, she rides her motorcycle from Leeuwarden down to Rotterdam to spend time with her family, and when in Friesland, she’s a constant buzz of activity. She speaks four languages (and would like to learn Frisian too), and was responsible for bringing the outstanding giant marionettes of Royal de Luxe to the streets of the Frisian capital, as well as many of the events in the 2018 cultural programme for 2018. In short, a bit of a cultural tour de force.

Having only discovered Friesland in the last five years, Woolgar has really fallen in love with the North: “the first thing I noticed, as lots of people do, is just how flat it is!” She became known in artistic circles for directing theatres, organising arts festivals and creating huge cultural events in various cities in Ireland, and her work has seen her travel to such diverse places as just-post-Communist Romania.

Whilst talking to Woolgar, it quickly becomes apparent that the well-polished spectacle of Leeuwarden’s year as European Capital of Culture was the result of serious grit. “I’d say the most important things in bringing about the year was sticking to your guns, and persevering”, she says with a hearty laugh. This perseverance was particularly useful when bringing the giant marionettes to the city: “we definitely wanted the diver and the young girl. However, I made a big call to also bring in the giant dog Xolo, and that really made for a huge spectacle.” The performance was recently named the best public event in the Netherlands in 2018. 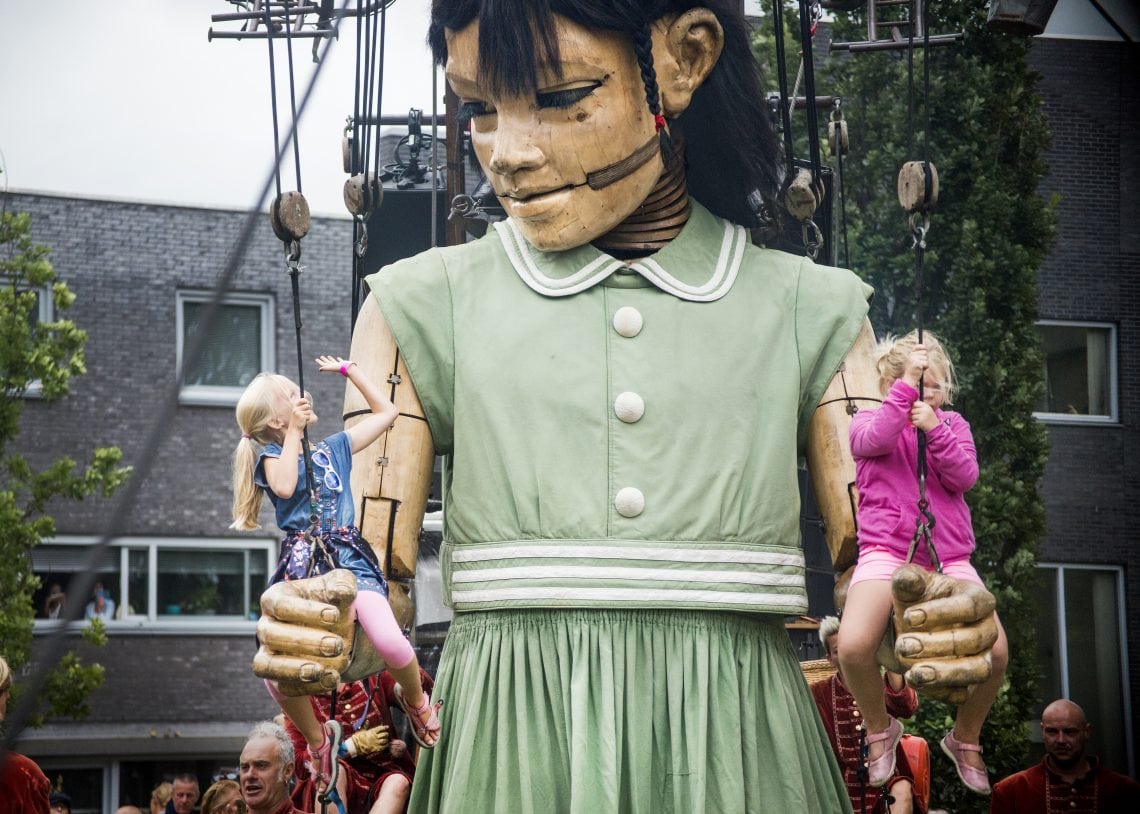 Interestingly, what she valued most about the giants walking the streets of Leeuwarden was the accessibility of the event. “We were completely set on making everything accessible: not only making sure that less able people could see everything, but also providing audio descriptions for blind people. We even convinced the Royal de Luxe team to let our guests with visual impairment touch the giants, which is normally a huge no-no.”

This inclusivity, says Claudia, is really a reflection of values that underpinned the entire year. “The principle of the Iepen Mienskip, or open society [in Frisian], meant that we tried to include everyone in the province. This community mindedness is really evident once you get out of the city: you realise that most towns can literally see their neighbours thanks to the landscape. So, collaboration becomes default. When putting on something like the Capital of Culture year, we really had to think from the ground up because, naturally, the first audience to convince are those on your doorstep! Getting non culturally-minded people on board was one of our biggest achievements.”

It’s fair to say that Friesland has slightly captured Woolgar’s imagination. “I was really surprised by the bizarre concentration of talent here: the history of the region is full of innovative thinkers.” And her favourite historical Frisian? “Eise Eisinga, the amateur astronomer who built the first planetarium in his house. It’s accurate even today; he was an extraordinary visionary. I also have serious sympathy for his wife, who was banned from her sitting room for 8 years whilst her husband painted the solar system on the ceiling!” The hearty chuckle makes another appearance. Her modern local hero though, is a little more prosaic. “My mechanic! Every motorcyclist needs a good local mechanic!”

So, having been involved in Friesland’s cultural sphere for a few years, what’s her favourite hidden gem in the region? “The Oerol Theatre Festival. The entire island of Terschelling turns into a stage, and I reckon even theatre cynics will enjoy the experience. If you’re a biker, then you’ve definitely got to do the 11 Fountains tour. They each tell the story of the city they’re based in, and you get this great feeling that you’re strolling through an exhibition whilst on a bike.”

Now that the Cultural Capital year is over, Woolgar most certainly isn’t abandoning the Northern Netherlands. She’s set up an arts organisation called Brave New World Productions and is bringing the postmodern Argentine theatre show Fuerza Bruta to the region for the first time for a residency in December. But when it comes to the legacy of Leeuwarden’s year as Capital of Culture, she’s a little more sanguine: “the legacy now lies with government initiatives. The mechanisms to make everything tick along need work, and I’m worried about the lack of independence of the legacy team. But, I’ll suspend judgement. In 50 years we’ll judge the success on whether we’ve really created an Iepen Meinskip.”

As someone who has made a name for herself by creating unforgettable cultural experiences, we couldn’t resist asking Woolgar just how one makes something memorable. It’s a short answer: “it needs to imbue meaning, speak to the heart of the audience, and hold something as a surprise.” She laughs. “Naturally, it’s easier said than done.”

Thomas Ansell is the Internationalisation Co-ordinator at the IWCN, and a contributor to The Northern Times. Fuerza Brutawill be performing in Leeuwarden in December.

Jewish history of the Northern Netherlands Part II: Occupation and the Holocaust

Jewish history of the Northern Netherlands Part III: Liberation and life after the war

ESN/ISO: “International students neglected in higher education in the Netherlands”

Jewish history of the Northern Netherlands Part III: Liberation and life after the war

Five new train stations in the north by 2028