Boeing 737 carrying out test flight from Lelystad over the north

A Boeing 737 will be flying low over the northern provinces while carrying out test flights from the proposed Lelystad Airport on Wednesday evening.

The aircraft will fly along the proposed future routes arriving and departing from Lelystad Airport. The Boeing 737 will fly over seven provinces and will pass over the cities of Groningen, Eelde, Appelscha and Meppel.

The tests are aimed at testing the noise exposure the provinces would face for the flights from Great Britain and the Scandinavian countries. The worst case scenario for the elevation of the flights would be between 1,800 and 2,700 meters – in Zwolle, the aircraft would fly even lower. 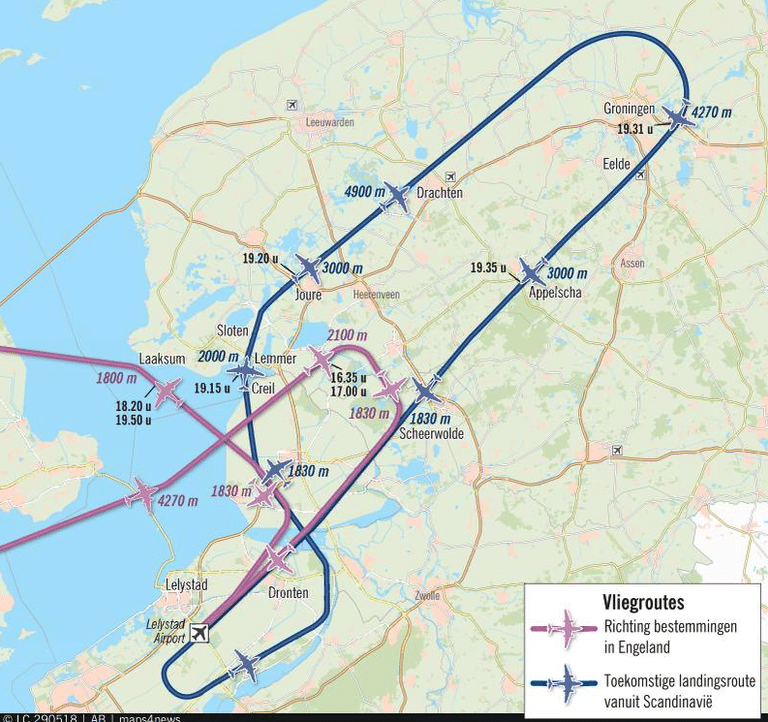 Dagblad van het Noorden reports that the plane should fly at 2,1000 feet from the Ijsselmeer over the Frisian municipality of Westellingwerf around 4:35 and 7 p.m. on Wednesday. The aircraft should fly at 1,800 feet over the southwest corner of the province around the same time.

Between 7 p.m. and 8 p.m., the Transavia Boeing should pass Sloten, Langweer, Joure and Drachten. The aircraft should be just west of Lemmer around 7:15 p.m. at an altitude of 2,000 meters. By the time the plane reaches Joure, it should be flying at 3,000 meters. A few minutes later, the flight should be above Drachten at 4,900 meters.

At 7:31 p.m., the aircraft will make a turn around the city of Groningen and will simulate its future final approach toward Lelystad. The flight will cross over Eelde, Appelscha and Steenwijk: the aircraft should be above Appelscha at around 7:35 at an elevation of 3,000 meters.

The Lelystad Airport is currently planned to open in 2020, pending approval by the Dutch parliament. If the airport is approved, aircraft would regularly fly low over Overijssel and Gelderland

Groningen most “cultural” province in the Netherlands

These addresses in Friesland have a slow internet connection

These addresses in Friesland have a slow internet connection

National champions: Donar to be honoured at Martiniplaza