Anti-racism demonstration in Groningen brings in over 1,000 people, keeps to Coronavirus regulations

Both the organisers of the sit-in, and the Gemeente, are pleased with the event

On Tuesday evening, around 1,000 people participated in a sit-in on the Grote Markt in Groningen, to protest racism against black people both in the USA, and Europe. Both the organisers and the Gemeente Groningen are pleased with the conduct of the demonstration, with protesters keeping 1.5-metres apart, and a friendly atmosphere. The sit-in was organised by the Black Ladies of Groningen (BLOG), Women’s March Groningen, and the Groningen Feminist Network.

As reported by the GIC, the Grote Markt was completely full at around 18:00, with organisers having chalked crosses on the Grote Markt, where activists could sit. That way everyone could keep 1.5 meters away, and this was a tough requirement of the municipality.

Several speakers took to the stage, with some choosing to speak out against police violence in both the USA, and closer to home- highlighting the death of Tomy Holten in police custody in March. Holten had been pressed into the ground by two police officers, and a worker at a Jumbo Supermarket in Zwolle, before dying several hours later. 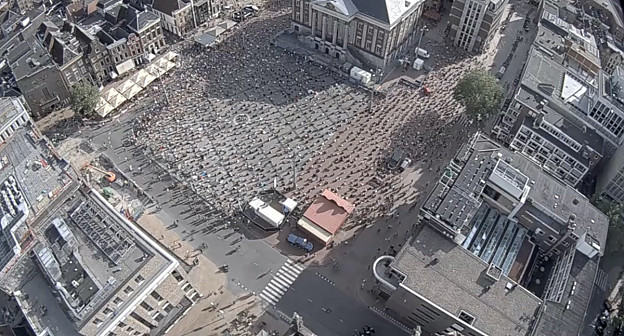 Speeches and slogans were chanted during the demonstration. Most of the time, the protesters remained sat on the ground. A minute of silence for all victims of racism was impressive, with most of those present also raising their fists. Many protesters carried signs, and the atmosphere remained calm and friendly.

Images via the Groninger Internet Courant