An American Groninger in Madurodam

Even though I have had a Dutch passport for nearly two years, it was only a couple of weeks ago that I truly understood just how much of a northerner I’ve become. This revelation dawned on me in an unexpected setting: strolling the tiny streets of Madurodam, a 1/25th-scale fake city populated by famous Dutch landmarks in The Hague.

As I meandered through the hodgepodge of Dutchness with hundreds of other visitors, I found myself quietly keeping track of how well represented the icons of the north were. The city of Groningen was fairly visible with smaller scale versions of the Goudkantoor, the Scheepvaartmuseum, the Groninger Museum and the central station.

But I was surprised by the sense of indignation that washed over me when I realised that the most quintessentially Groningen of places – the Martinitoren – was nowhere to be found. My resentment turned into disbelief when I noticed a large (relatively speaking) swath of Madurodam’s valuable real estate was dedicated to a NAM natural gas extraction site, complete with a flare that came up to my hips.

Noticing that Groningen’s tallest tower was nowhere to be found was the moment I fully understood that I feel like a northerner now.. How could it be that one of the main tourist attractions in the country – Madurodam brings in around 700,000 visitors a year, both Dutch and foreign – felt that the tower best equipped to represent Groningen was a symbol of the natural gas industry?

I’m not the first Groninger to be perplexed by d’ Olle Grieze’s glaring absence: back in 1996, Trouw featured an interview with a Groningen resident who visited the then recently updated park, who also questioned how the tower could be overlooked. A spokesperson for the park back in the ‘90s said Madurodam didn’t want “too much of the same” types of buildings: “We already have ‘Lange Jan’ from Middelburg”. As of 2019, the park features popular Dutch towers and spires like the Utrechtse Dom, the Amsterdam Westerkerk spire, Munttoren and Schreierstoren and the Euromast from Rotterdam.

But it wasn’t just my recently rooted Groningen identity that took irrational offence: as an honorary Frisian by marriage, I also found myself weirdly irritated by the striking lack of Frisian architecture on display. The only Frisian landmarks deemed iconic enough for inclusion in this strange amalgamation of Dutchness were the Woudegamaal steam factory in Lemmer, the Eisinga planetarium in Franeker (which I was unable to find), the Snekerpoort from Sneek (plus a short video presentation about the Elfstedentocht ice skating race) and a Frisian farm house. Leeuwarden’s Oldehove, like Groningen’s famed tower, is also noticeably absent, but poor Drenthe is completely invisible – the least the park’s designers could have done was pile up some actual rocks and call it a hunebed.

In another somewhat insulting departure from realism, none of the Groningen buildings have any induced earthquake cracks running through their tiny walls – but the pint sized version of the station was the grounds of a small protest back in 2015 when members of Schokkend Groningen snuck in miniscule banners calling for an end to the earthquakes.

When I brought all of this up in a conversation with a friend from Groningen whose family lives in the heart of the earthquake zone, he pointed out that when Madurodam was initially built and developed in the ‘50s, the gas industry was a point of national pride for the country. Phrases like “induced earthquakes” and “climate change” were not yet a part of daily conversation, so boasting about Groningen’s financial contributions alongside miniature tulip fields probably seemed like the most natural thing in the world back then.

So how does the park actually decide on which buildings – and industries – to feature? Do they try to strike a balance in their representation of each province in slightly smaller form? Is it based on sponsorship? Is it a not-so-subtle way to get children interested in an industrial career?

Marianne Aalders, a public relations representative for the park, says that influential Dutch companies have “helped” the tiny city from the very beginning. The park is named after George Maduro, the late son of a wealthy Jewish family from Curacao who died in the Dachau concentration camp during World War II. His parents donated the gulden that funded the park’s founding. The very first feature visitors see upon entering the park is the “tropical ambiance” of the estate where the Maduros lived on the former Dutch colony.

“The Maduro family provided the start-up capital in 1952 in order to create Madurodam as a living memorial to their son”, says Aalders. Since it officially opened, the park has raised up to one million euros a year for charities, and the design of Madurodam was actually the brainchild of a Groningen-born architect, Siebe Jan Bouma.

But beyond the Maduro family namesake, Aalders says that five of the largest Dutch companies – KLM, Unilever, Philips, De Bataafsche Petroleummattschappij (which later became Shell) and the Dutch National Rail service NS – were “not only the economic motor of the Netherlands, but they are really the founding fathers of Madurodam.” Each of the companies has made a significant financial contribution to the park, and the influence of KLM in particular is impossible to miss: the Schiphol section is truly massive (to scale) and features jets and luggage travelling around the grounds of the airport. Aalders says that the NS contribution takes the form of the largest outdoor train network in Europe: the iconic yellow trains crisscross the breadth and length of the park. 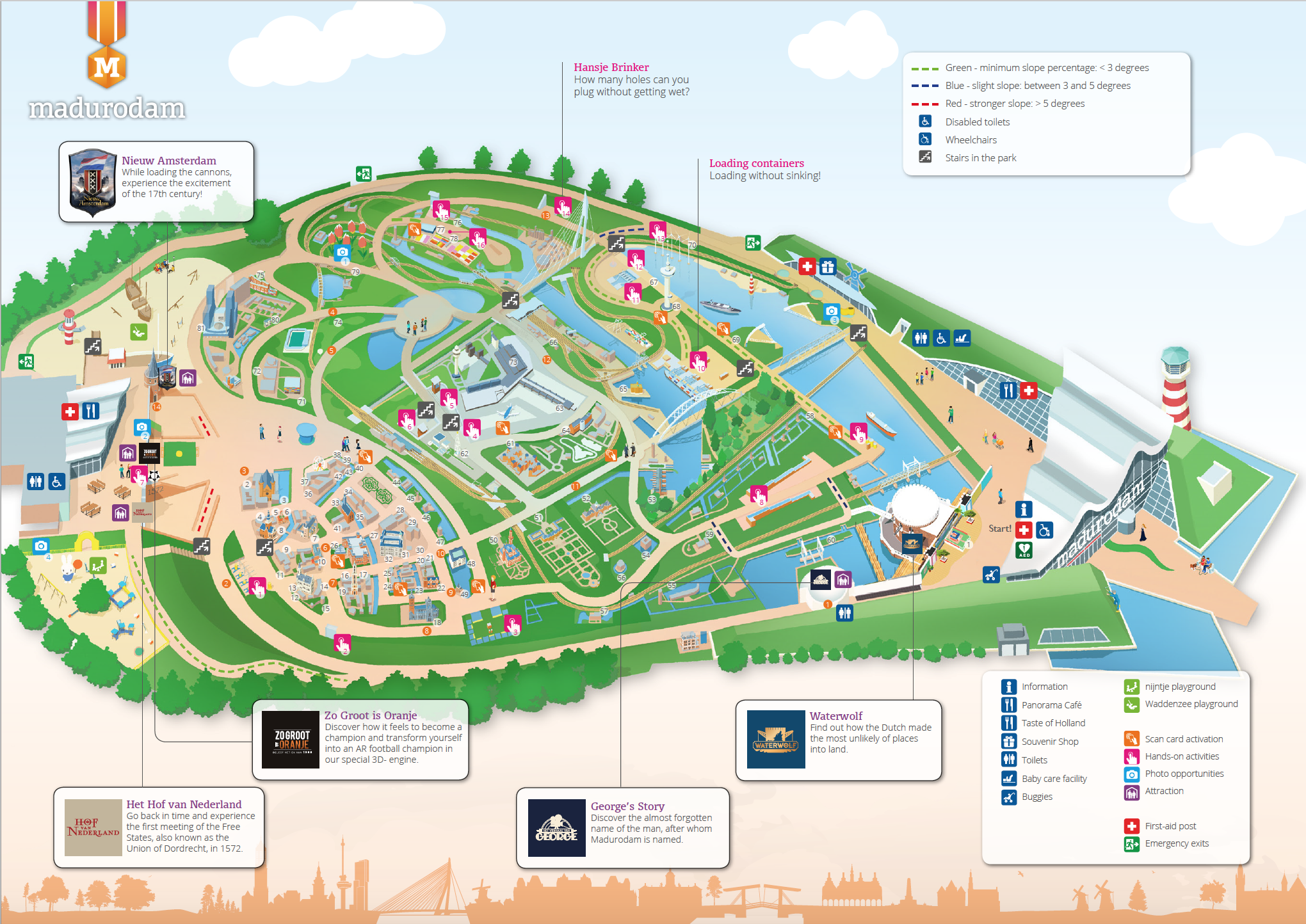 In the ‘80s and ‘90s, Aalders says that companies from across the country approached Madurodam with requests to get a replica of their respective headquarters or icons from their local municipalities added to the park. “In those cases, they would finance the construction of the scale model and make an annual contribution for maintenance.” That era is still very much reflected in the park, which has undergone a handful of makeovers over the decades: several of the largest structures are smaller versions of bank buildings, like the Alberts & Van Huut ING complex in Amsterdam (the same architects who designed the Gasunie “Apenrots” in Groningen).

Omrop Fryslan attracted a million viewers during Maarten van der Weijden’s Zwemelfstedentocht earlier this summer. Why not create a whole feature with buildings from all eleven of the Frisian cities with tiny, magnetically-controlled Dutch skating figurines with their hands neatly clasped behind their backs (or at least one little bald swimmer)? Why not the TT Assen track, or ASTRON in Dwingeloo? What about the Brandaris on Terschelling, the Noordertoren on Schiermonnikoog, or even the 19th century lighthouse in Stavoren? And for crying out loud, what’s a northerner got to do to get the Martinitoren into the tiniest city in the country?

“Miniatures were the main focus of the park when it opened in 1952, but now they are just one of the three different ways that we are inspiring visitors with the best that the Netherlands has to offer”, Aalders says. The park has been shifting away from tiny versions of Dutch icons and moving towards more interactive features and multimedia indoor presentations. “Since the big renovation in 2012, we’ve been focusing more on adding dozens of digital and physical interactive features, and in 2014, we started creating more indoor attractions like “New Amsterdam” and “The Waterwolf.”’

The newest additions have an unmistakable “Netherlands first” vibe with their themes of Discovery, Cities and Water: the American-made animatronic Peter Stuyvesant inside the “New Amsterdam” exhibit is flanked by toy canons that kids can fire as he declares there was “nothing, absolutely nothing” when the Dutch reached America’s shores and claimed what would later become New York City for The Netherlands. The Lenape tribe would like to have a word: Wall Street is literally named for the barrier that was built to keep the Native Americans (and the British) from returning to their land. The “Waterwolf” exhibit exhorts visitors to help keep the pressure levels on a massive water pump within the safe range to drain the Haarlem lake and save the low lying lands, making a career in water engineering seem like a thrilling (and surprisingly easy) career move.

Aalders says that the park recently received approval to expand further over the next ten years, but the emphasis will remain on educational and interactive features rather than adding new landmarks. That means that hopeful northerners awaiting the day that their local treasures will be represented in the classic Madurodam style probably shouldn’t hold their breath.

Northern offence aside, as a 162-centimetre-tall person, it’s not very often that I tower over anyone or anything in the Netherlands, but in Madurodam, I was delighted by my newfound status as a giant. It’s impossible to stroll the tiny streets and fight the urge to pretend you’re Godzilla wreaking havoc on the miniature canal boats and airplanes at tiny-yet-still-massive Schiphol (although there were surprisingly few good photo angles to properly play up the illusion). Maybe the next time I pay a visit, I’ll get to pretend that the only threat to the (hopefully soon-to-be-added) Martini Tower is invasion by a kaiju, not gradual destruction by earthquakes.

Special thanks to Sarah van Steenderen